Bull Creek tract makes an appearance, as does Bluebonnet Hills

Last Thursday’s City Council meeting (June 11) adjourned at the somewhat reasonable hour of 9pm, reflecting a fairly fast-paced rip through a heavy zoning agenda (several postponements and a handful of first readings only). For a change, there were not many purchasing contracts to kick the tires on. 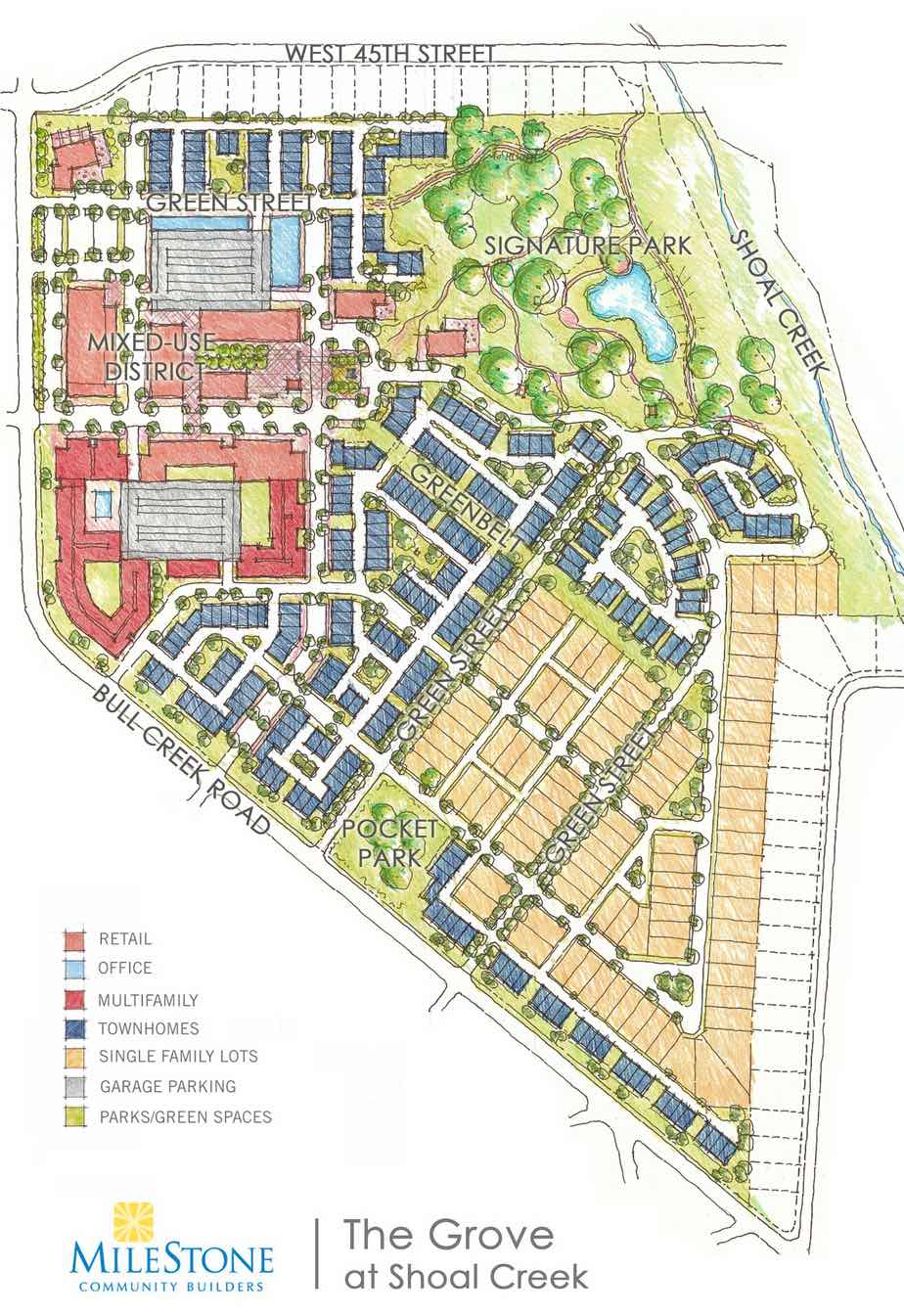 Most of the morning was consumed by a briefing on “The Grove at Shoal Creek” – the tract of formerly state land at 45th Street and Bull Creek Road that the city briefly considered purchasing outright (at $28 million), then passed on, which the state then sold to a private developer (Milestone Community Builders) at roughly $47 million.

Missed opportunity? Not quite yet – Council still has zoning authority – and Council took no action during this briefing session. Council first heard from staff about the zoning process for a tract that, because it had been state land, had no zoning category. Basically, the developer has the option of preparing a “planned unit development” that would gain certain entitlements (e.g., greater height, density) in return for public amenities (affordable units, parkland), or – if Council initially sets the baseline zoning “too high” for successful negotiation, the developer might instead apply for conventional zoning, section by section as time goes by. The briefing was a get-acquainted session, with the developer’s representative sketching for Council the general ambition for the project and Council responding with questions and suggestions. The matter is expected to return to to the dais in August for that baseline discussion and possibly a decision, with negotiations proceeding thereafter.

Among other highlights, Council:

• Spent several afternoon hours hearing from residents of the Blue Bonnet (aka Bluebonnet) Hills neighborhood (part of Travis Heights), over a pending application for a Local Historic District for the 109 pre-Forties bungalows in the section below East Annie Street (and thereabouts). It seemed nearly all 109 homeowners (and a few folks from elsewhere) spoke to Council, about what has clearly become a fairly neighborhood-polarizing proposal. A little more than half of the residents believe an LHD will preserve the “historic character” of the neighborhood, and a little less than half (the precise proportions are also in dispute) fear it will create onerous obstacles for home remodeling or forbid “non-conforming” additions. After nearly four hours, Council voted 7-3 (Sheri Gallo off the dais) to approve the LHD, on first reading only – partly in (perhaps futile) hopes that the residents can come together, talk out their differences, and return with a stronger consensus.

• Indefinitely postponed action on a request for multifamily zoning for a residential project at 183 and East 290, a disconnected tract in the crotch of the two highways – the primary reason nearby neighborhood associations (which in their neighborhood plans prefer limited office/commercial use) opposed the request. After fairly sharp words between the witnesses and the landowner, Council indefinitely postponed in hopes that the owners could then return with a better (or at least different) plan sooner than with an outright denial (18 months minimum).

• As promised via D4 CM Greg Casar’s proposal in the homestead exemption debate, committed via resolution to $740,000*[*see correction below] in additional funding for low-income residents, via the Tenant-Based Rental Assistance program or similar efforts, to be included in the upcoming FY 2016 budget planning.

• Passed a resolution concerning reducing the number of “vacancies” (budgeted but unfilled positions) among city staff, particularly those that have been open longer than 12 months; a fairly lengthy discussion determined that the problem is not as large as previously described (among 13,000 employees, a 7% vacancy rate is fairly low), but City Manager Marc Ott will report the status in August and Council will consider the matter in budget development.

• Sent to the Audit and Finance Committee a proposal to freeze or "cap" property taxes for “the elderly and disabled” (not at all the same thing), for additional review and the possibility that there might be better methods (e.g., raising the homestead exemption covering those residents) to accomplish the same goal.

• And in the Bluebonnet Hills LHD discussion – where some residents suspect that their “no” votes had somehow become “yes” votes in the city’s various tabulations, although city staff argued otherwise – CM Casar suggested, only partly in jest, that after what he had experienced in the endless Laura Pressley election contest, the city consider moving to electronic voting: “much harder to tamper with.”

• *Correction: This passage originally indicated (in error) that the funding amount was unspecified; in fact, the $740,000 was included in the resolution as the amount of funding roughly equivalent to a 1% property tax exemption, and it is Council's "intent" to include that additional amount in FY 2016 budget planning.