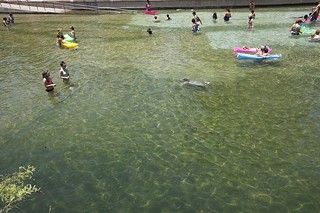 Barton Springs, before the flood (Photo by Jana Birchum)

In this week's News Roundup, summer can officially begin, because Barton Springs has reopened; development of the Eastside continues to be contentious; who can really say what warms the Earth? (our money's on Facebook rants); and more.

• Clear Cold Waters: Barton Springs Pool reopens this morning with normal operating hours. Cleanup efforts from the Memorial Day flooding have been completed and the pool has been cleared of debris. Worth having another look here at the pool at full flood stage of Barton Creek; it's quite a display of natural power. Summer hours: Swim at Own Risk, 5-8am; Guarded Swim, 8am-9pm; Guarded Swim (free) 9-10pm. Closed for cleaning 9am-7pm Thursday. – Michael King

• Tomorrow, June 9, the Planning Commission is expected to vote on whether to grant a conditional use permit to developers of the proposed East Side Hotel on 1207 East Cesar Chavez. The development, always controversial, recently became more so after the developers agreed to take part in Workers Defense Project Better Builder Program. While WDP and other labor advocates praised the developers for agreeing to terms such as a $15/hour wage floor, those opposed to the hotel see the agreement as an attempt to divert attention from many residents' criticism to the project. When asked by the Chronicle whether the WDP deal had any effect on the East Cesar Chavez Neighborhood Planning Team's reservations about the hotel, ECC NPT President Alberto Martinez said no. He explained that "our opposition is not about wages paid (frankly, paying a decent wage is, in my opinion, the moral thing to do and not a thing to pat oneself on the back), but about the negative impact the development will have on our neighborhood – a negative impact that far outweighs any benefits." Among his concerns are that the street is already severely overburdened by traffic, and that he believes that the hotel and its restaurant and bar will bring in a short-term visitors that will not treat the neighborhood as their own. A protest has been planned for tomorrow's hearing, which will take place at City Hall, 6pm. For more on the WDP agreement, as well as D3 CM Pio Renteria's take, see "Eastside Developer Promises $15/Hour Wage Floor, and More," June 5; for a recap of the hearing, see this week's upcoming print issue. – Amy Kamp

• Call Me an Expert: The headline item at last Thursday’s City Council meeting (June 4) was the vote to enact a 6% homestead exemption, which you can read about here and here, as well as in this week’s print edition. Originally scheduled for a “time certain” (i.e., the earliest possible discussion) of 6:30pm, that vote was delayed until after midnight, because of a substantial agenda and also because Council continued its current pattern of arbitrary contract-parsing as well as substituting its own “expertise” for that of its professional staff.

Some highlights (and lowlights):

• Council spent the entire morning laboring over Item 21, a Real Estate Services proposal to negotiate the (voluntary) purchase of 63 high-risk properties in the Williamson Creek 25-year floodplain. After interrogating staff at painful length, Council approved the negotiation process, although with so many caveats staff was vibrating with uncertainty by the end of the discussion.

• At long last, Council approved the recently negotiated contract with the Austin Firefighters Association and couple of related legal consultant contracts. New cadet classes should begin taking shape over the next few months.

• Don't Jump: Approved an encroachment agreement with UT-Austin for a pedestrian bridge to be constructed over Dean Keeton Street – only after a late-evening exchange with D1 CM Ora Houston, concerning whether the bridge might present a temptation to sometimes “fragile” students.

• Approved creation of a Flood Mitigation Task Force and the Joint Sustainability Committee for the Climate Protection Plan.

• Call Me a Cab: Approved on final readings new regulations for all three cab franchises, in principle intended to allow additional licenses as well as additional rights to drivers, including more ability to move among franchises and have access to dispute mediation. – M.K.

• Ask Dr. Science: After a Politifact report gave a “mostly false*”[*see correction below] ranking to D6 CM Don Zimmerman’s lecture to climate scientist Katherine Hayhoe to the effect that only the sun causes global warming, not carbon dioxide (apparently Engineer Zimm is unfamiliar with the concept of insulation), Zimmerman and his Facebook friends collaborated on a tirade concerning human vanity. Zimm’s contributions: "'Professing themselves to be wise, they became fools.’ … In its insatiable quest for unlimited power, government is desperate for an almighty science-god to endorse the idiocy that they can control the weather with draconian powers over all humanity.… Chicken Little [presumably, President Barack Obama] got elected to office and he's doling out lucrative ‘research’ contracts to those willing to produce complex simulations ‘proving’ man-made climate change. The ‘science’ and ‘math’ can be manufactured to meet the political agenda – Al Gore proved that 15 years ago.” – M.K.

*Correction: This originally read "half-true"; in fact, the Politifact ranking was "mostly false."