Minority, low-income women will be hit hardest by cuts 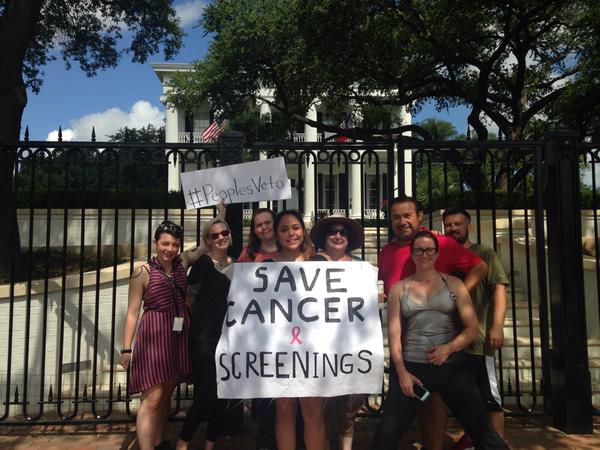 Hernandez vows to show up just about every day to protest the state budget plan to exclude Planned Parenthood from a life-saving breast and cervical cancer screening program, slated to pass by Gov. Greg Abbott’s desk before June 21. While an initial plan to tier funding and leave the provider last in line was eventually scrapped, sparing unaffiliated clinics caught in the crossfire, a revised strategy, led by Sen. Jane Nelson, R-Flower Mound, directly went after Planned Parenthood with the explicit intention of hurting the abortion care network, as the Chronicle previously reported.

“When the session ended and they let the cuts pass, I got really frustrated,” said Hernandez during a Friday morning interview outside the mansion gates. “Cancer is a non-political issue – it doesn’t discriminate against you if you’re Democrat, Republican, or an Anarchist – but they’re trying to politicize it for reasons that are completely irrelevant.”

Under the new plan, only providers eligible for the Texas Women’s Health Program can be part of Breast and Cervical Cancer Services (BCCS), an assurance that PP is not involved, as GOP officials booted the provider out three years ago for the same ideologically-driven reasons. A provision in the deal notes that if no provider exists in a region, the health department will "compensate other local providers” for the services. The budget has drawn criticism from patients who say they wouldn’t have survived without BCCS and from Republican Rep. Sarah Davis, R-Houston, who told the Texas Tribune in March, “If we don’t have the provider network, women cannot be served. And they will die.”

Hernandez, an Austin resident and ACC student, has been engaged with politics ever since she participated in protests against the Texas-Mexico border wall as a pre-teen. Last Legislative session’s activism surrounding package abortion law, House Bill 2, lit another fire under the unrelenting young activist, who is determined to spend most of her days planted at the mansion in protest. Originally from Brownsville, Hernandez said the cuts “hit close to home.”

“As a Mexican-American woman I know that cervical cancer affects women of color, Hispanic, Latino and low-income women the most – it’s among the number one killers,” she said. “So the people that will be hit hardest are the people that need it the most.” Indeed, African-American and Latina women hold higher rates of cervical cancer than other groups and women residing along the Texas-Mexico border are 31% more likely to die from cervical cancer than women living in non-border communities. And the need for prevention in the area is augmented when considering the result of drastic women’s health budget cuts to the Rio Grande Valley – described as a “human rights crisis” in a 2013 Center for Reproductive Rights report.

“I’ve seen the domino effect other women’s health budget cuts have had on all parts of the Valley," she said. "When you add that to reduced access to cancer screenings, you are basically leaving Texas women out to die.”

The cancer screening and diagnostic program, administered through the Department of State Health Services in partnership with the Centers for Disease Control and Prevention, has served 374,109 women in Texas since 1991 (33,599 last year). Planned Par­ent­hood affiliates alone serve about 3,000 women a year.

Hernandez, and other reproductive rights activists that filter in and out to join her protest, hope Abbott vetoes the screening cuts; however, that outcome is a far away long-shot for the vehemently anti-choice governor. At the least, she hopes to bring heightened awareness to the issue so that in the end, lawmakers’ actions don’t go unpunished. “Abbott won’t be the only one to see backlash – it’ll be all the legislators that helped signed a budget that drastically reduces access to vital health care.”