After wrapping up a Summer Fun-related appointment in New Braunfels on Sunday, I drove through San Marcos to check in with family whose home bordering the Quail Creek golf course was impacted by the early morning deluge.

I arrived to learn that their home was flooded with over six feet of water.

Texas weather can be cruel. Seems we can't have the good without the bad. The same Memorial Day weekend rains – that pushed drought-wrought Lake Travis over the 50% mark for the first time in three years – swelled the Blanco to bursting, wreaking havoc on Hays County and neighboring areas.

To recap: Thousands of homes in San Marcos and Wimberley have been damaged. The Blanco River overflowed Sunday around 3am, washing away homes and vehicles. The city of San Marcos confirmed Monday that one man was killed, and KXAN has reported that 12 are still missing. Shelters opened at the San Marcos Activity Center and Wimberley High School early Sunday morning, offering food, water and shelter to those displaced. All Memorial Day events in the area have been canceled.

As I drove in from New Braunfels, I had no idea the scope of ruin I'd find. 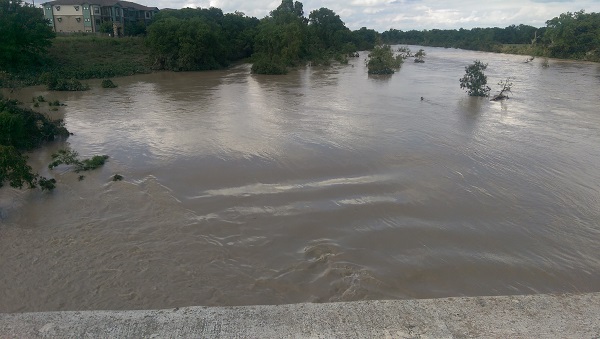 The views off Route 80 in San Marcos, near my aunt's neighborhood (photo by Nina Hernandez)

Bogie Drive was a swamp. Trudging through the murky waters of my aunt’s front yard up to the house, I paused at the sight before me. Her beloved Cadillac – she'd saved years for that car – lay pinned by a neighbor’s truck. Her husband’s Chevy Tahoe, carried away by the rushing waters, rested against a hole in the side of the house. Friends and family scurried about emptying the garage of its muddy possessions.

Even amidst this wreckage, my aunt found it in her to gently tease her neighbor. "You know your truck hit my car, right?" Her dry sense of humor added a small dose of relief to the bewilderment.

I, however, was not prepared for what I would see inside. Instagram snapshots showing wreckage barely conveyed the reality. Seeing in person magnified it all tenfold. Their piano, now soggy and defeated, lay on its back in the living room right next to a brand new sofa set. The TV appeared to have melted. Thick flood mud coated furniture and the floors, while grass stains just under the threshold of the front door marked the water's final surge.

Years ago, when I lived here as a teenager, I remember walking across Quail Creek golf course to the Blanco River. As I surveyed the spot yesterday, I imagined the water taking the same path that night before, then finally engulfing the house. A few saturated books littered the foyer, and mold already took hold up along the kitchen walls.

Next door, the neighbors – nicer people you will not find – assembled their sodden furniture in the driveway. People saw images of the homes on Facebook and just began wandering over. I paused to marvel at the beauty and height of a friend’s daughter, who was just a golden-haired toddler the last time I saw her. Likewise, people I've known since I was a kid can’t believe I’ve gotten so old.

In all of this mess, more rooms than they could fill have been offered, and it’s clear no animal shall want for a temporary home. When I told my aunt I was writing this piece, she implored: “Just make sure to put in how much everyone is helping each other.”

Acting as the city’s evacuation center and short-term shelter, the San Marcos Activity Center was already caring for children and elderly residents. Outside the Animal Shelter (which suffered no damage in the storm) a pop-up truck offered pet food and supplies. I'd left Bogie Drive to see how the shelter was functioning, and stepped in to ask how and when relief efforts would be deployed.

That’s when I started crying. Rec programs manager Lisa Morris wrapped me in a bear hug. She'd lost her home in the flood of 1998, and by now can joke about it: “I say, ‘The last time I moved was after the ’98 Flood. It was easy: You just throw it all away.’”

Yesterday, much of the city's efforts still focused on assessing damage and rescuing people that might still be trapped in homes or cars. But the shelter, with donations coming in from all over the community offered immediate comfort to the weary folks trickling in. A projector on loan played movies to keep the kids occupied. Walmart, closed and dealing with flood mud of its own, donated phone chargers and towels. Apart from the Animal Shelter, the Red Cross and Salvation Army stood on-hand to provide additional support. And news today says that the local HEBs will keep the 'round-the-clock relief workers in hot meals.

Or as Stevie Ray says, "Sweet as sugar, love won't wash away."

TO VOLUNTEER OR OFFER ASSISTANCE

• Donate to the Red Cross
• Donate to the United Way
• Donate to Austin Disaster Relief
• VolunteerTX.org is the main portal to sign up to volunteer your time and muscle to help folks in need. Once the Texas Conservation Corps at American YouthWorks sets up the site page specific to this event, volunteer registration will open. Keep checking back at their site and here on our blog.

Stay tuned for more stories and info on more ways you can help over the next few days. 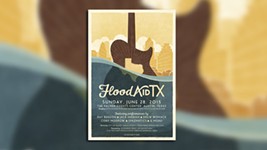 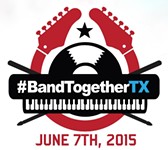