A measure that poses substantial hurdles to abortion access for vulnerable minors took another step forward to becoming law, as the Texas Senate approved the package legislation on second reading Monday afternoon. 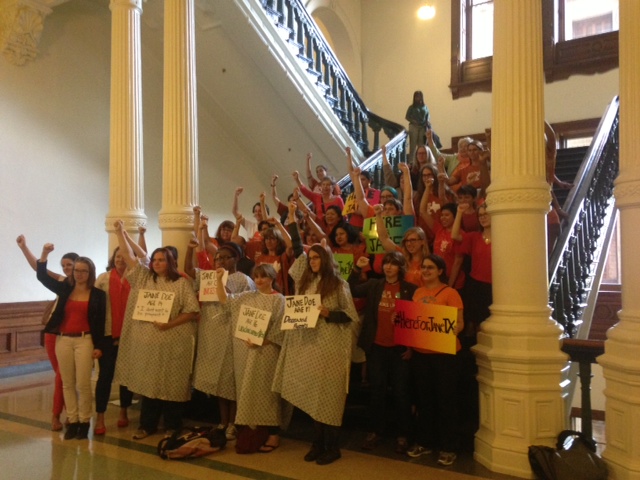 The orange army paid a visit to the Capitol this weekend to protest judicial bypass restrictions in HB 3994. (Photo by Mary Tuma)

House Bill 3994 by Rep. Geanie Morrison, R-Victoria, restricts judicial bypass – the legal process by which a teenager averts parental consent to undergo abortion through securing permission from a judge. Many of the minors that seek judicial bypass – around 200 a year in Texas – do so as abused and neglected teenagers; some have no relationship with their parents while others fear physical violence if their pregnancy is revealed. Reproductive health advocates consider the process an important “safety net” for the vulnerable population while anti-choice activists claim the legal protection is too “loose,” as the Chronicle recently reported.

After roughly four hours of debate, the Senate voted 20-10 mostly along party lines (with the exception of Sen. Eddie Lucio, D-Brownsville, who continues to vote with the GOP on matters of reproductive health restrictions) to push HB 3994 forward, without exceptions for rape or incest victims. Among its many onerous rules, HB 3994 heightens the burden of proof of abuse for minors; requires minors to divulge personal information such as telephone number and home address; prolongs the period a judge can rule on bypass from two to five business days; and prevents minors from obtaining bypass in an outside county (unless there are fewer than 10,000 residents).

After complaint from Democrats and even some conservatives, Senate sponsor of the bill, Charles Perry, R-Lubbock, revised two provisions of the omnibus legislation. Initially, the bill required doctors presume all abortion-seeking women are underage until they show proof of “valid” government identification. Under the new language, if a woman does not have an ID the physician could still perform the procedure but they would have to report the incident to the Department of State Health Services. And while the original bill would cause the abortion to be denied if a judge did not rule on the bypass case by the newly proposed five-day deadline, Perry’s second change makes the determination “silent.” However, Democrats and reproductive advocacy leaders say even with the revisions, the restrictions imposed by HB 3994 could still endanger the well being of minors, compromise confidentiality, and saddle teens with sizable barriers to health care access. Perry continually defended his bill on the floor, saying the provisions grant judges greater “clarity” and will “protect” minors.

Before a vote was cast, the Republican majority swatted down, one by one, more than a dozen amendments (and two points of order) offered by Senate Dems meant to protect the safety and anonymity of minors. Most strikingly, an amendment proposed by Austin Democrat Sen. Kirk Watson that would expedite cases for survivors of rape or incest was tabled 21-10 by Republicans. “I would hope a judge would move expeditiously [in cases of sexual assault/incest],” said Perry. Watson shot back that Perry did not need to simply “hope” that judges would act with speed, but had the opportunity to codify the aspiration in law.

Other failed amendments included proposals to exclude teenagers who are already mothers; allow school IDs to be used as identification; expand court venue requirements; prevent burden of proof rules from changing; and add civil penalties for those who violate confidentiality provisions. Sen. Sylvia Garcia, D-Houston, who offered up amendments of her own, questioned what she saw as the legislation’s implicit distrust of both young girls to make their own decisions and of judges ruling bypass cases. “I’m not really sure who it is you don’t trust. Do you not trust the girls, the judges, or the entire judicial system?” asked Garcia. “… Your bill doesn't seem to respect or trust women and now it's taking a step further by not trusting judges,” she later continued. 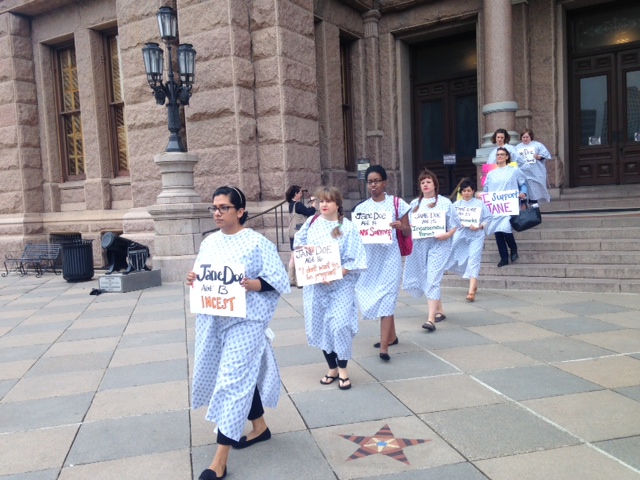 On Friday, May 22 pro-choice activists at the Capitol donned hospital gowns to represent abused and neglected pregnant minors who rely on judicial bypass, a process that would become more difficult with the passage of HB 3994. (Photo by Mary Tuma)

Watson reminded his colleagues the Texas version, passed in 1999, was shepherded by Republicans, signed into law by conservative former Gov. George W. Bush, and designed to withstand constitutional challenges (which it had yet to meet). The new version, argued Watson and others, could open up the potential for such a challenge.

While denying the measure is aimed directly at reducing abortions, Perry readily admitted major anti-choice advocacy groups, Texas Alliance for Life and Texas Right to Life, helped him in crafting the bill. When asked by Watson if he reached out to any of the key players actually involved in assisting abused and neglected minors through the complicated legal process, Perry responded that he heard from them during testimony given at public committee hearings. Susan Hays, legal director of Jane’s Due Process, an organization that helps minors navigate bypass, said if Perry had given them and others – including law enforcement, domestic violence case workers, Child Protective Services, and physicians – the same weight as anti-choice groups, the bill would not exist. “Anyone who understands the dynamics of working with abused teenagers doesn’t agree with this bill,” Hays told the Chronicle following the vote. “But no one else besides those who are opposed to abortion had a seat at the table.”

HB 3994 cleared the House in mid-May after a similar round of debate and heated objection from Democrats. The legislation still needs final approval from the Senate and could come before a conference committee to resolve differences between the House version and Senate amendments. 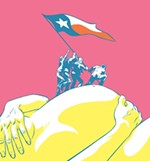