UPDATE: On Thursday, the Texas House gave final approval to HB 3994, a measure that severely restricts a minor's access to judicial bypass. Sponsored by Sen. Charles Perry, R-Lubbock, the bill now moves to the Senate, where it is scheduled for a Monday morning public hearing at the Senate Health and Human Services Committee.

EARLIER: After shooting down a flurry of amendments offered by Democrats – including exceptions for rape and incest victims – House Republicans passed legislation Wednesday evening that would impose heavy obstacles for minors seeking abortion without parental consent.

House Bill 3994 by Rep. Geanie Morrison, R-Victoria, makes securing judicial bypass – the legal process teenagers under 18 years old, facing the threat of endangerment, use to be granted an abortion without parental consent through the courts – much more difficult.

Among the stipulations in Morrison’s bill: A minor can only receive bypass in her hometown; she must show a valid government ID before undergoing abortion; and if she claims abuse, she must show proof, a requirement seen as especially heinous by objecting Democrats and reproductive rights groups. The bill also prevents the same person from being appointed ad litem and attorney; allows judges to delay court rulings for five business days; and would make the names of judges who rule on bypass cases public – a measure Dems, citing concern from Texas judges, believe will lead to anti-choice violence.

Rep. Donna Howard, D-Austin, sought to allow victims of rape or incest to give sworn statements instead of being forced to deliver the burden of proof of abuse. “Minors should not be re-victimized,” said an impassioned Howard. “Imagine being raped by your father and then having to try to navigate the court system and provide clear and convincing evidence of that rape?” (During the floor debate, Rep. Celia Israel, D-Austin, criticized the House members for lack of deference to the sensitive issue, “I've never seen the chamber be so disrespectful when talking about cases of rape and incest.”) Howard’s amendment – like that of her colleagues – failed 95-48.

Rep. Rafael Anchia, D-Dallas, Rep. Mary Gonzalez, D-Clint, and Rep. Eddie Rodriguez, D-Austin, aimed to clarify and expand the ID requirement for women by supporting the inclusion of school IDs and other forms of identification. Rodriguez described the ID rule as a “de facto ban on abortion” for ID-less women, likely to be some of the most vulnerable in the state, such as sex trafficking victims. If a woman is raped and needs an abortion and doesn't have a government ID she would be “out of luck” under the bill, Anchia pointed out.

The overly stringent rules even generated confusion from a Republican. Rep. Sarah Davis, R-West University Place, reminded lawmakers conservative anti-abortion legislators crafted the initial judicial bypass law, approved by the Texas Legislature in 1991. “The legislation you are attempting to overhaul today was created and championed by Republicans,” she said. “Are you as confused as I am?”

A handful of organizations including the ACLU of Texas, Jane’s Due Process, NARAL Pro-Choice Texas, the National Latina Institute for Reproductive Health (NLIRH) and Planned Parenthood Texas Votes issued a statement in heated opposition following the bill's passage. “The lawmakers who voted for HB 3994 today are playing politics with the health and safety of abused and neglected teenagers in Texas," they wrote. "Rep. Morrison’s bill dismantles a crucial safety net for the most vulnerable Texans seeking access to safe and legal abortion care and protection from further abuse."

Following a lengthy, nearly four-hour floor debate, the bill passed 98-47. It still needs a final stamp of anti-choice approval from the House before it heads to the Senate. 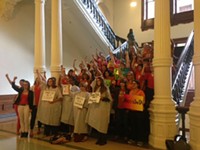