The 84th Legislature has seen ceaseless attacks on local control, from fracking to red light cameras. But the latest would force local convention centers to give sweetheart deals to gun shows, and the gun lobby seems hellbent on pushing this through as quickly and stealthily as possible.

House Bill 3866 by Rep. Jason Isaac, R-Dripping Spring, would effectively force gun shows down a community's throat, even if its elected officials and residents clearly didn't want it. To quote the analysis:

H.B. 3866 amends the Local Government Code to prohibit a municipality that leases a public facility to persons for short-term use for shows, exhibits, or similar purposes from refusing to lease the facility to a gun show promoter for the purpose of conducting a gun show.

The way the bill is phrased, this is absolutely mandatory. So, if a gun show comes to Austin and demands to use the Convention Center, then they have to rent it. But the bill doesn't say the gun vendor can't demand it even if it is already booked out.

It even restricts how much the city can charge. They cannot bill the gun show one red cent more than the lowest rate they charge to any other exhibitor. So say a city gives a discount rate to a school district, or a charity. They have to give the same rate to a gun show - a private, commercial entity.

Put the gun issue aside for a moment. How is it acceptable that the legislature would set leasing rates for a boat show, or an IT fair?

Even worse, the bill would bar them from charging any additional fees, such as policing and security, that they would not charge to, say a Beanie Babies festival.

What's really surprising is that such an obviously major issue for so many municipalities has been shoved on to this morning's Local and Consent Calendar. When asked why, Urban Affairs Committee Chair Carol Alvarado, D-Pasadena, said she had sent it to that calendar, which receives no debate, because her committee had voted unanimously for it. She said that there had been no particular pushback on this bill and that, if they had an issue, gun groups "should have paid more attention" when it was before her committee.

However, it's raising some eyebrows now. Gun control group Everytown for Gun Safety has been contacting lawmakers before it hits the floor this morning. Members of the Travis County and Dallas delegations are looking over the bill, trying to work out if it really does what it seems to do, because it's so glaring a state imposition on localities that it seems impossible this would be on Local and Consent.

Even if Isaac and Alvarado's scheme goes through, and the bill flies straight over to the Senate today, now it's on people's radar. That means much tougher committee hearings, at a late stage in the committee process when bills are easily derailed. But it could still get pulled from Local and Consent by legislators wondering why the firearms industry will, yet again, be set on a pedestal. 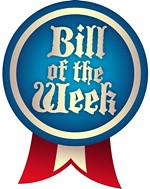 Bill of the Week: Barriers to Bypass
Legislation would make abortion access more difficult for minors