Abbott, Cruz, Jade Helm, and the death of the sane GOP

The Republican far right has become like the Terminator. It can't be reasoned with. As shown by the GOP response to "Jade Helm 15," the federal special forces training operation taking place partially in Texas, logic has long been sacrificed. 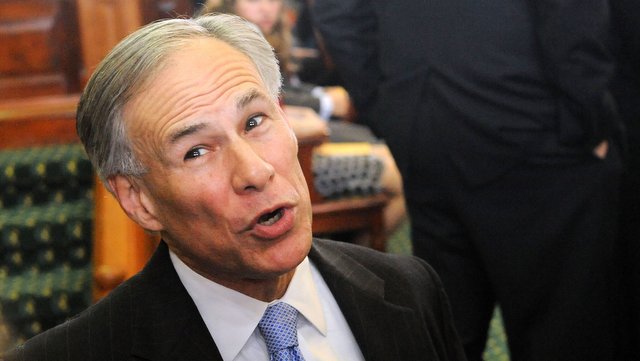 Gov. Greg Abbott: protecting Texas from the US, and his primary from the fringe right. (Photo by John Anderson)

Let's get into what Jade Helm 15 actually is. Per a presentation made available to the media earlier this year, it's a Realistic Military Training exercise. That's basically army speak for "cosplay," in which troops act as though they're taking part in a real operation. This one will run July 15-September 15, in Arizona, California, Colorado, Nevada, New Mexico, Texas, and Utah. Its intention is to allow training collaboration among various special forces, including the Green Berets, Navy SEALS, Marine Special Operations Command, and the 82nd Airborne Division.

Now, reasonable complaints would be that having 60 troops tromping around near town, and some extra late-night flights, might be a bit of a pain (kind of like avoiding Downtown Austin during SXSW, or maybe Pease Park on Eeyore's birthday). Or the anti-interventionist left and right might also ask why the US military needs to train so many troops for eventual operations in countries that pose no existential threat to the US.

Not a legitimate complaint: That these will be secret United Nations troops coming to kill all the men, kidnap the women, sell the kids to Boko Haram, and turn Walmarts into breeding factories.

These operations happen all the time. In fact, they are a regular occurrence around Fort Bragg, so the residents of North Carolina might be glad of the break. Not that Texas is a stranger to the practicalities of having a standing military. The residents of San Antonio, and pretty much every other military town on the planet, live with the good and bad of a huge number of military personnel and material (and, yes, a convoy 0f M35 2 1/2 ton trucks rolling past your house in the wee small hours of the morning is no fun).

And then there's the pretty much hourly basis on which the Legislature and every other Texas politician praises the US military.

Now, in an interesting case study, we've seen what happens when you juxtapose Texas' reverence for troops against the GOP's instinct to pander to the furthest reaches of its right wing rump.

Mere weeks after a state House committee hearing in which speakers railed against the Union in the Civil War, and called anti-slavery Texans traitors, Gov. Greg Abbott indulged in some naked pandering to those that hold modern US Special Forces in the same contempt. As has been widely reported, he has announced that he is sending the Texas State Guard to monitor the exercise. As a learning opportunity? No, because the right-wing fringe, ginned up by Agenda 21 conspiracy theories, black helicopter phobias, and radio demagogue Alex Jones, has decided that this is the beginning of martial law.

It came to a head in Bastrop, during a recent public briefing (because public briefings are how they get ya!). Lt. Col. Mark Lastoria, spokesman for Army Special Operation Command, said, "This is not a preparation for martial law. All we want to do is make sure our guys are trained for combat overseas. That's it."

Tell that to the crowd wearing Infowars t-shirts and carrying signs with such bon mots as "No Gestapo in Bastropo."

Abbott could have laughed this off, or ignored it, or adopted a statesman-like pose and said that this is a training exercise and residents shouldn't be afraid. Instead, he interjected himself as a bold protector of Texas against the North (sorry), ISIS (no, wait) the Revenue Man (no, wait, we've got this) Obama. In a letter to the Texas State Guard command, he said that they would be dispatched "to address concerns of Texas citizens and to ensure that Texas communities remain safe, secure, and informed."

So what's next? Do the crazies believe that North Carolina is already under occupation? Will Abbott send the Texas Rangers to keep an eye on Fort Mead? And why feed into this inflammatory Texas vs the US rhetoric? Because that's what Abbott does. This is, after all, the same Abbott that, as attorney general, infamously gave his job description as "I go into the office, I sue the federal government, and I go home." Of course he's going to pander to anti-DC sentiment. Plus, he's waded deep into Agenda 21, anti-UN conspiracy theory waters before: Back in 2012, he went on a Twitter rampage against UN elections observers, warning them that "groups and individuals from outside the United States are not allowed to influence or interfere with the election process in Texas." Which, of course, raises the question about what part of "observer" slipped his grasp. 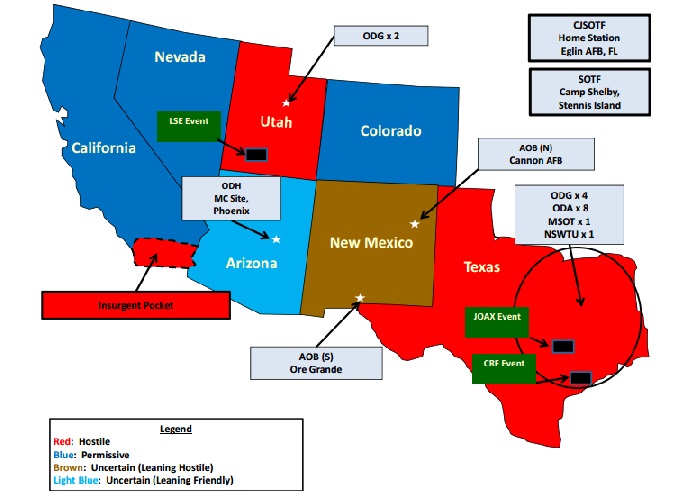 The map for Jade Helm 15, the upcoming US Special Forces training exercises. Unsurprisingly, Texas is marked red for hostile

Not to be outdone, enter the GOP's grandest of grandstanders, Sen. Ted Cruz, who told Bloomberg News that he is keeping an eye on Jade Helm, and has asked the Pentagon for details. He said, "I understand the reason for concern and uncertainty, because when the federal government has not demonstrated itself to be trustworthy in this administration, the natural consequence is that many citizens don't trust what it is saying."

But this wasn't just the kind of rote anti-DC sentiment that gets a contented rumbling from the rump and back-slapping at the Austin Club. Bashing federal elected officials and civil servants is one thing, but the military is a step too far for some Republicans. Former Lt. Gov. David Dewhurst stepped out of semi-retirement to pen a column for the Dallas Morning News, trying to stuff Abbott's genie back in the bottle.

Dewhurst polished his credentials by noting that he is a Vietnam-era US Air Force officer (admittedly, he does gloss over the fact that he was a CIA case officer in Bolivia – possibly wisely, since this would convince the fringe that he's in on this conspiracy too). While not explicitly naming Abbott, he stated that "When [US military forces] arrive, they should be greeted by a freshly-swept welcome mat, not suspicion and angry protest." Dewhurst noted that he had recently traveled to Fort Bragg and met with Major Gen. Darsie Rogers of 1st Special Forces Command. "I told him that Texans were looking forward to supporting them as they utilize our state as one of this year’s training sites. It appears I may have spoken too soon, as some Texans have inexplicably gone on the offensive against this effort to train our troops."

Of course, Dewhurst refrains from taking a pot shot at the fringe media that has fueled these crackpot concerns, or even the crackpots themselves. Instead, he blames the White House. "Unfortunately," he said, "some Texans have projected their legitimate concerns about the competence and trustworthiness of President Barack Obama onto these noble warriors."

That leaves him at the same end of the pool as Cruz, who blamed the Tinfoil Helmet fever on "a federal government disrespecting the liberty of the citizens. That produces fear, when you see a government that is attacking our free speech rights, or Second Amendment rights, or religious liberty rights."

But the strongest backlash came from the most unexpected of sources: former Euless state rep Todd Smith, who wrote to Abbott saying that his "pandering to idiots … has left me livid." While throwing the conciliatory bone that Abbott is still better than Lt. Gov. Dan Patrick (throwing particular shade on "the lieutenant governor driven nut job driven rant regarding your Pre-K program"), he bemoaned the fact that traditional Republicans now must "choose between degrees of demagoguery. … As a 16 year Republican member of the Texas House and a patriotic AMERICAN [Smith's emphasis], I am horrified that I have to choose between the possibility that my Governor actually believes this stuff and the possibility that my governor doesn't have the backbone to stand up to those who do. I'm not sure which is worse." 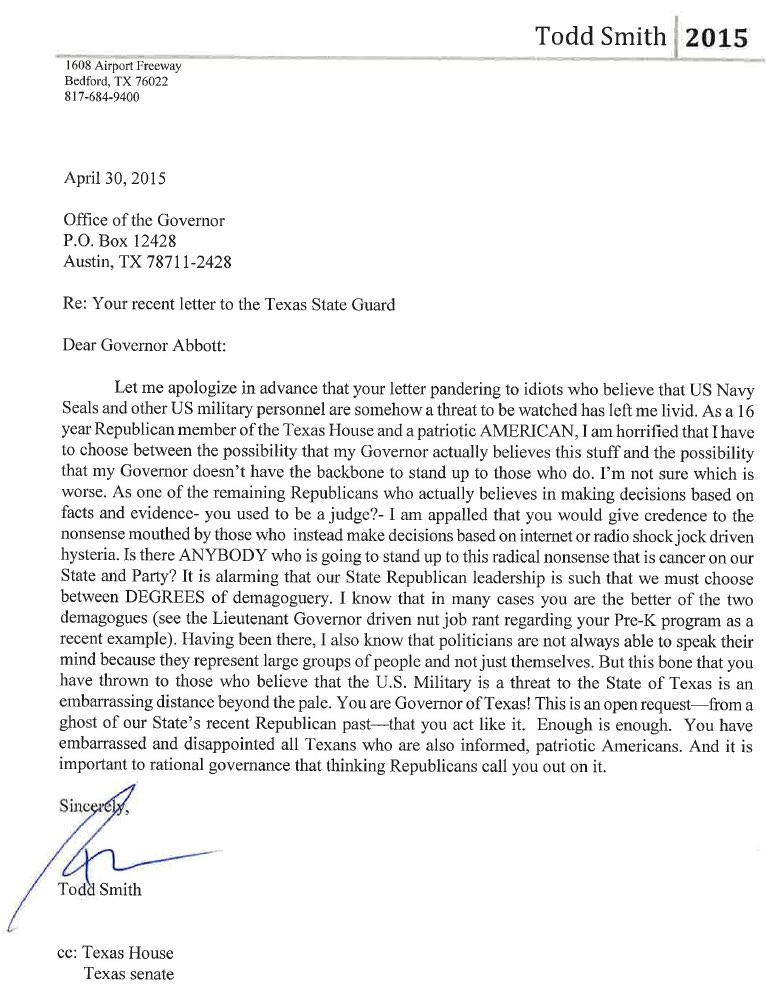 In a statement that must leave Alex Jones' ears burning, Smith throws the blame – not at the Obama administration – but directly at Abbott for giving "credence to the nonsense mouthed by those who instead make decisions based in internet or radio shock jock driven hysteria."

This seems to be a Texas phenomenon, since no other governor in a state with a Jade Helm 15 presence has disappeared over this cliff. In a statement to Talking Points Memo, Republican Utah Gov. Gary Herbert simply said he had "been assured that this will be a standard training exercise, much like those done throughout the rest of the country."

So that's a Utah governor and a couple of retired Republicans taking on Abbott's posturing. But there has been utter silence from the rest of the Republican party. This stands in stark contrast to 2009, when then-Sen. Bob Deuell, R-Greenville, called out his party mates, saying they should "dealing with black helicopters and other myths that are out there by the right-wing extremists."

Because here's the underlying fact. The GOP is afraid of its own flank. Sitting Republican office holders, true blue Conservatives, know that there is no position they can adopt that is too extreme to prevent them being primaried by someone even further to the right. The party's furthest, craziest reaches don't even want competent or qualified anymore. They want bomb throwers like Rep. Jonathan Stickland, R-Bedford, who wears his contrarian habits like a badge of honor, shuns legislative process, and was recently publicly kicked out of a committee hearing. That's unprecedented. It will also probably see him running for Senate one day. And there are too many GOPers who would rather flow with that river than fight back against the tide.

They remember the other part of the quote about the Terminator. It can't be bargained with. It can't be reasoned with. It doesn't feel pity, or remorse, or fear. And it absolutely will not stop, ever, until you are dead. Or, in this case, primaried out in favor of the next Stickland. 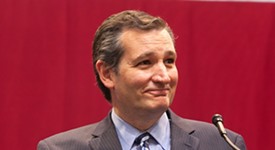