Body Cameras for APD, but When? 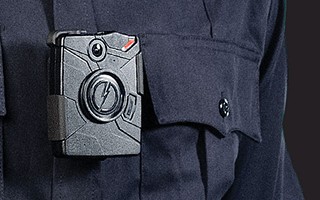 Monday night’s City Council Public Safety Committee hearing took up, among other things, the topic of body cameras for Austin Police Department officers. It appeared as though all sides were in agreement that body cameras should be implemented; however, there was disagreement about the timeline for implementation and policy details.

The first to speak on the subject was APD Assistant Chief Jason Dusterhoft, who emphasized the complexity of implementation – “we want to do it right,” he said. He also discussed the likely benefits and drawbacks of the technology. He said that APD believes the cameras will lead to improved behavior, both for officers and citizens in general, and that video footage will expedite resolutions and provide training material for officers. On the other hand, he explained, use of body cameras raises privacy concerns different from those raised by dash cams. In the course of their work, police enter private homes, interact with victims of and witnesses to crimes, and deal with confidential informants. The cameras could have a chilling effect on people who might not be willing to talk if they knew they were being filmed. Dusterhoft also pointed out that APD is already backlogged with open records requests, which could multiply exponentially with the use of body cameras, especially considering that one incident could generate video footage from several cameras.

Dusterhoft outlined a timeline that, added together, would mean about two more years of work before full APD implementation. He also said that he expects the cost to be about $7 million over the course of five years, taking into account the initial start-up costs, as well as other costs such as data storage.

Police Monitor Margo Frasier took the podium after Dusterhoft. She noted that the privacy concerns raised by body cameras aren’t entirely new – even though dash cams don’t go into people’s homes, audio from within private residences is sometimes recorded. She also said that there is “a great need for us to work toward having body cameras”; there are cases she has dealt with as police monitor where there were conflicting accounts and, she said, “I wish I knew what really happened.” She warned that the city should not expect the Legislature to fund the implementation of body cameras, even if a bill authorizing a grant, such as SB 158, is passed. She said that when the Lege passed a law requiring dash cams, 60-70% of the state’s money went to funding DPS implementation. Frasier emphasized that APD need not wait until funding was in place for every officer to have a camera. She said that she thought the Downtown entertainment district could be a good place to begin using them, or even testing equipment, because those officers usually don’t have dash cams, and it's an area where there's a lot of activity.

Another important policy consideration will be what would trigger a camera to begin recording. Neither Dusterhoft nor Frasier appeared to believe it would be appropriate for the cameras to record an officer’s entire shift, but both were aware that clear rules would need to be in place regarding when it would be appropriate for an officer to turn off, pause, or mute a camera.

Debbie Russell of ACLU Texas said that the ACLU had come around on body cameras, and that its recommendations are now similar to those of the Police Executive Research Forum. Russell highlighted, however, her strong belief that officers not be allowed to view their camera footage before writing reports, in order to ensure officers provide honest first-hand accounts, rather than tailoring reports to match video footage.

NAACP Austin President Nelson Linder told the commission that he was bothered by the two-year timeline. “Why can’t we fast-forward this whole process?” he asked. Linder said police need to be held accountable now, because “we’re talking about lives … once somebody’s killed, we can’t bring them back.” He argued that more needed to be done than simply adopting body cameras, saying that “we want a uniform [use-of-force] standard,” and calling on Council to do more to hold police accountable. In response, Council Member Greg Casar said, “I don’t think that anybody thinks this is going to be a panacea,” and later said that he was looking into “other initiatives to build legitimacy.” Committee Chair Don Zimmerman suggested that one accountability fix could be requiring the police monitor to report directly to Council, to which Linder replied, "I'm for it 1,000 percent." On Tuesday, Linder repeated his call for urgency in an email he sent to Council, saying, "The false notion that somehow you can create another committee to address an issue that requires immediate attention is reckless and dangerous."

Peaceful Streets Project founder Antonio Buehler, the last of the scheduled speakers, said certain safeguards would need to be in place for body cameras to work, including not allowing police to turn off cameras when interacting with the public; punishing police officers for equipment malfunctions; not allowing police to review footage before giving statements in either criminal or civil cases; and making sure access to footage is controlled by a third party and as available to defense attorneys and defendants as it is to the police. He pointed out that in his own case, the media was never given access to the dash cam footage. Buehler argued, probably quixotically, that if an officer’s camera were to malfunction during a use-of-force incident, it should result in automatic dismissal, regardless of whether fault was able to be determined.