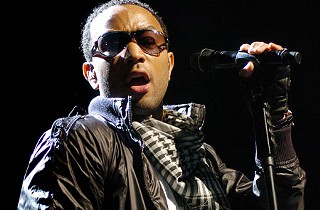 In this week's News Roundup, John Legend wants to use his celebrity for good; the DOJ discovers flawed FBI testimony in capital cases; local radio host Paul Pryor passes away; and more.

• John Legend was in Austin on Thursday to kick off his "Free America" campaign against mass incarceration. The singer performed for inmates at the Travis County Correctional Complex in Del Valle before cruising to the capitol to speak about his efforts with prison reform and meet with Rep. Sylvester Turner, D-Houston, and Sen. Rodney Ellis, D-Houston. Legend’s public remarks were brief, but he stressed that he hopes to put his celebrity to good use on the issue, and spoke to his understanding that that prison sentences are rarely the best rehabilitation service for juveniles, drug users, and those with mental illness.

Legend’s presence came in part thanks to the Texas Criminal Justice Coalition. The Austin-based nonprofit is currently lobbying for a number of bills to pass through the House and Senate that go hand-in-hand with Legend’s efforts. The coalition delivered literature at the event that outlines a three-part basic framework: 1) ending the over-criminalization of Texas youth by changing the laws concerning skipping school and breaking curfew; 2) reducing punitive sentencing practices and incentivizing probation over incarceration for small crimes such as low-level marijuana possession and prostitution; and 3) improving transparency and accountability standards for Texas prisons in an effort to increase the likelihood of successful reentry into civilian life post-sentence. – Chase Hoffberger

• The Justice Department and FBI acknowledged on Saturday that 26 of 28 examiners in the bureau’s microscopic hair comparison unit gave flawed testimony in almost all of the trials in which they appeared as evidentiary witnesses against criminal defendants during a period of more than 20 years before 2000. More than 95% of the 268 trials reviewed so far by the Justice Department were found to have included some kind of false testimony that aided state prosecutors, and included 32 cases that resulted in death sentences. The Washington Post, whose 2012 reporting on flawed forensic hair matches helped launch the investigation, wrote Saturday that while the FBI’s errors don’t transitively imply that those defendants were actually innocent, efforts are currently being made to investigate which cases would have grounds for appeal. More than 2,250 cases still need to be reviewed. – C.H.

• Big Money in Prisons for Refugees: A new report just released by Grassroots Leadership documents the latest expanding niche of the private prison industry: immigration detention. “Payoff: How Congress Ensures Private Prison Profit with an Immigrant Detention Quota” reports that 62% of all Immigration and Customs Enforcement beds are now operated by private prison companies (up from 49% in 2009); that the industry lobbies Congress fiercely and expensively to maintain a federal detention “bed quota” under immigration law (currently at 34,000 beds); that two private firms (Corrections Corporation of America and the GEO Group) operate 72% of those beds, accompanied by dramatic increases in profits; and that both companies are expanding their operations in Texas (Karnes County and Dilley) and Louisiana. The report, which recommends policy reforms – including elimination of the detention bed quota – can be read in its entirety here. For more on Grassroots' work, read last week's Chronicle story here. – Michael King

• Jump to It: Austin Energy reported that Saturday night’s storm at its peak knocked out power for as many as 11,000 customers at 90 locations, due to falling limbs and other line interruptions. Tree-trimming crews and line crews worked through the night to restore power; by late morning Sunday AE was reporting the number of customers still without power was 73. The storm dumped so much water on Auditorium Shores that the final day of the Austin Reggae Festival was canceled due to saturated grounds; you can still contribute directly to the Capital Area Food Bank. Better hope the Skatalites can make another trip. – M.K.

• R.I.P. Paul Pryor: Longtime Austin radio host Paul Pryor passed away April 10, after a long battle with kidney disease; he would have been 66 on April 22. Pryor was the son of Cactus Pryor, a legendary local radio and TV personality, and brother of Don Pryor, co-host of KLBJ-AM’s “Todd and Don Show”; Paul followed his father and preceded his brother in what became the family profession. Cactus Pryor was a contemporary of President Lyndon Baines Johnson, and a liberal Democrat in an era in which the LBJ family owned and operated KLBJ radio and then TV. His son Paul’s career marked the changeover at KLBJ-AM (where he worked from 1993 to 95) from its days as a 24-hour news station to one dominated by conservative talk – as was happening across the country – in a local version of Rush Limbaugh, then at his political height. Pryor made a harsh target of local environmentalists and other liberal activists, and told an interviewer at the time that he had moved to the far right “for the ratings, for the money.” He also battled addictions throughout his career, and was fired from KLBJ in 1995 after a relapse. He resurfaced at KVET-AM in what then Chronicle media critic Lee Nichols described as a “kindler and gentler” version, with conservative commentary but also playing traditional and local country music – interrupted by another serious health crisis in 2000. Ill health kept him from radio work in recent years. His career represented an Austin version of the national polarization of popular culture over the last two decades, as had the shift of KLBJ-AM to hard-right commentary after the abolition of the Federal Communications Commission’s Fairness Doctrine in 1987. The FCC's action gave an enormously lucrative gift to GOP politics, and is still congenial to the corporate ownership of broadcast networks, while moving the center of the national political debate steadily rightward. – M.K.