In a multi-state tour gauging his prospects for a 2016 presidential run, U.S. Senator Bernie Sanders, I-Vermont, dropped into Austin this week for a handful of speaking engagements, including a town hall at the Electrical Workers Union Hall and a keynote address at the Travis County Democrat's dinner honoring marriage equality advocates. 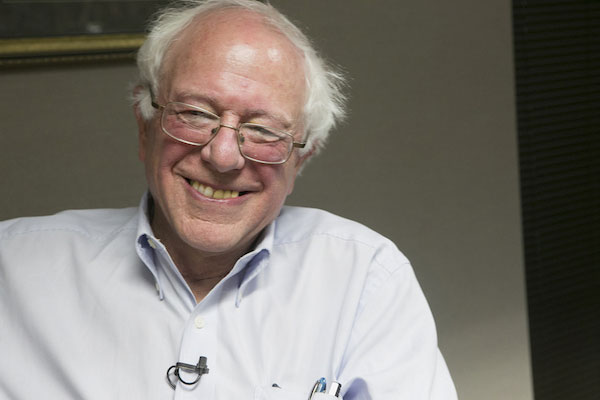 The longest serving independent member of Congress and self-proclaimed democratic socialist, Sanders is recognized as a staunch champion of the middle class and campaign finance reform, making a potential presidential bid in a post-Citizens United environment a true test of his values.

The Chronicle sat down with Sanders to talk about his possible presidential run, the state of income and wealth inequality, and why progressives have yet to see economic justice come to fruition.

AC: Have you made a decision about whether or not to run for president in 2016?

BS: We’re giving it very serious thought. I have been in California, Nevada, Texas, and tomorrow, Illinois to try to ascertain the kind of political support that’s out there for what would be an unprecedented grassroots campaign involving millions of people. I feel good about the support we are seeing but I won’t make a decision until we can determine what political support we have and the kind of capabilities we have to raise the kind of money that we need to run a strong campaign.

AC: What would that potential presidential campaign platform look like?

BS: It would focus on the grotesque level of income and wealth inequality in America: The fact that the wealthiest people and largest corporations are doing phenomenally well while the middle class continues to decline and we have more people living in poverty today than in almost any other time in American history.

Today in America, the top one-tenth of 1% owns more wealth than the bottom 90%. Today in America, 99% of all new income goes to the top 1%. In the last two years, the 14 wealthiest people in America saw their wealth increase by $157 billion, which is more wealth than is owned by the bottom 130 million Americans. That is what is going on America today – that is obscene, that is unacceptable, that has got to change.

Meanwhile, the middle class continues to decline, people are working longer hours for lower wages and can’t afford to send their kids to college, and in many cases, people are having a hard time putting food on the table to feed their families. So we need an agenda which creates millions of decent paying jobs. The fastest way to do that is to rebuild our crumbling infrastructure. We need to raise the minimum wage to a living wage. We need pay equity for women workers. We need a new trade policy that demands corporate America invests in bringing jobs here. We need to deal with climate change, which is threatening the planet. We need to make college affordable. In the next few weeks I’ll be introducing legislation, which, if passed, would provide free tuition for public colleges and universities throughout America. We need the rich to start paying their fair share of taxes. And we need a health care program that guarantees health care for all Americans.

AC: When Occupy Wall Street hit its peak and there was growing fervor aimed at overturning the U.S. Supreme Court's Citizens United decision, it felt like America was at a tipping point. Do you feel that progressives seized the moment or do you feel it was perhaps a missed opportunity? 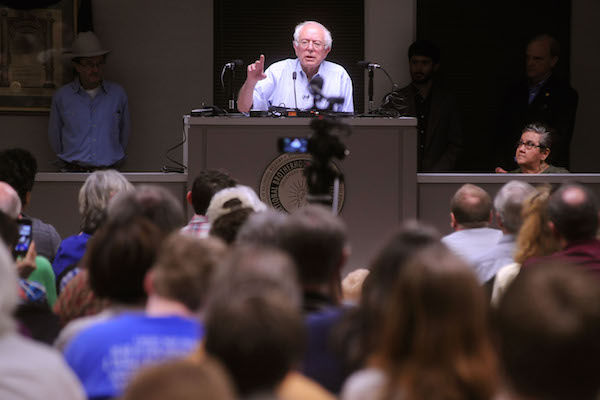 Sen. Bernie Sanders speaks before a crowd at the Electrical Workers Union Hall on Tuesday evening. (Photo by John Anderson)

BS: I think Occupy Wall Street deserves a lot of credit for doing two things: Focusing attention on the greed, the recklessness, and illegal behavior of Wall Street, and how much incredible harm and pain Wall Street has inflicted on the American people – that was very, very important. The second issue they talked about – which many of us have been talking about for a long time that needs to be talked about over and over – income and wealth inequality. So I think Occupy Wall Street did a great job of raising those issues. The question of how you take those issues and build a strong grassroots, political movement…well, that remains to be done.

AC: As a nation, where should progressives focus their efforts when it comes to bridging wealth inequality?

BS: They should demand the rich and large corporations start paying their fair share of taxes. Warren Buffett reminds us that he is a multi-billionaire, the second richest guy in America, and his effective tax rate is lower than yours, probably, because of all the loopholes billionaires can take advantage of. So his effective tax rate is lower than a nurse or a truck driver, and that’s totally absurd. We are losing about $100 billion a year because corporations stash their profits in the Cayman Islands, in Bermuda, in other tax havens – that’s absurd, corporations are going to have to start paying their fair share of taxes. To achieve wealth equity and economic justice you have to raise income – one way to do that is to raise the minimum wage to a living wage. I would go over a period of years to $15/hour; no one that works 40 hours a week should live in poverty. There should be pay equity for women workers who are now making 78 cents on the dollar compared to men. So, in terms of economics: a massive jobs program, investing in infrastructure, raising wages, a new trade policy that invests in America, not in China.

The time for us to be breaking up the major Wall Street banks is long overdue. I don’t think Congress controls Wall Street, I think Wall Street controls Congress – they’re too big, they should be broken up.

AC: What are some ways that citizens can combat wealth inequality at the local level?

BS: At all levels of government – local, state, federal – there has to be an understanding that the middle class has been declining for 40 years while the rich get much richer. Which means at the local, state, and federal level the largest and most profitable companies are going to have to start paying their fair share of taxes. We need progressive taxation. We need job creation. Many states have already taken to raising the minimum wage. And also, with this disastrous Citizens United court decision, cities and states can play a very important role by passing resolutions saying we’ve got overturn Citizens United.

AC: What do you believe is the major culprit in stunting a strong progressive movement that would usher in true economic justice?

BS: I think a lot of people are very demoralized with politics, they think the billionaire class is so powerful that they can’t be beaten, and it makes no sense to even get involved in politics. They’re exhausted, because in many cases they are working longer hours for lower wages. I think we have a corporate and right-wing media that tells us how bad government is every single day and discourages people from getting involved in the political process. Those are some of the reasons.

AC: Do you think there’s any truth to that – that corporations are too big to fail? That perhaps the barriers to economic justice are just too high to overcome?

BS: Look, when you have a decision like Citizens United that essentially says that the Koch Brothers – the second wealthiest family in America, worth $85 billion – who want to end social security, Medicare, Medicaid, federal aid to education – when they are so powerful and prepared to spend $900 million in this next election, it may well be. It may well be that the billionaire class is so powerful, have so much influence over the economy, over the political life of the country, over the media that maybe we cannot beat them – I don’t know that.

But I have four kids and seven grandchildren and I’m going to do my best to beat them. I’m not guaranteeing success but I think it would be wrong not to do what brave Americans have done throughout history – to stand up, to fight back, and to do our best. And that’s what I look forward to doing.