City Council meets this Thursday, March 12 (work session Tuesday), with an even lighter formal agenda (23 Items) than last week. We’ll have more on the upcoming agenda and other matters in this week’s print edition. Here’s a brief summation of actions taken at the March 5 meeting. 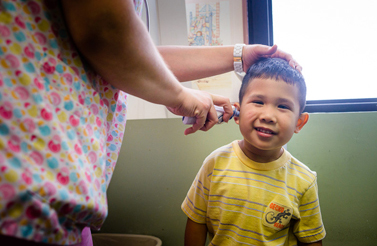 Patient at the People's Community Clinic

There were three headline items:

The Long Metropolitan Park/Decker Lake golf proposal, which after quite a bit of dais discussion and some questioning of staff (the public hearing had been closed last year), Council voted 9-1-1 to refer to committee for review – actually two committees, Open Space and and Economic Development (chaired respectively by Council Members Leslie Pool and Ellen Troxclair), to return with their recommendations in April. Most members seemed at least dubious about the proposal, with Mayor Pro Tem Kathie Tovo and D7 CM Pool firmly opposed, and only D1 CM Ora Houston (in whose district the park is located) strongly in favor of the proposal. CM Delia Garza (D2) abstained.

Just before the vote was taken, Houston read into the record a statement supporting the project as a necessary economic development for the Northeast area, saying in part: “Item 28 [the Long park proposal] is not about the environment, natural resources, flora or fauna. Item 28 is about people, opportunity, economic development and hope. … Adults, seniors and children who live East of Highway 183 have been waiting patiently for the city to get serious about employment opportunities. We now find ourselves in a situation where many people see the public/private partnership to create golf courses as the way to get the jobs, financial resources and community benefits that are needed, before another 15 years passes.”

Also prominent on the agenda was the decision to move forward on the buyout of 240 more homes in the Onion Creek 100-year floodplain, 140 of which were considerably damaged in the 2013 Halloween flood. The vote was 10-0-1 (D6 CM Don Zimmerman abstained), although some Council members worried that the action would set a precedent for the city to purchase all homes in 100-year flood plains (city staff estimates about 5,700 such homes). Staff said that this area is a priority for flood mitigation, and additional monies have been budgeted (not yet approved) to purchase homes in the Williamson Creek floodplain.

After a relatively brief debate on second and third readings on the now legendary Garza Ranch tract (the final tract in a MoPac at William Cannon development), Council voted 7-4 to allow the development to move forward with a 13,000 vehicle trip limit, and some additional restrictions (attempting to keep traffic off MoPac during peak hours). The question had historical and symbolic resonance, and the main objections were the potential of additional environmental degradation in the Barton Springs watershed. The no votes were D5 CM Ann Kitchen and Garza, Tovo, and Pool.

• Authorized negotiation and execution of a “Promise Zone” initiative with other local jurisdictions, in a wide swath of north, east, and southeast neighborhoods, under a pending federal designation by the U.S. Department of Housing and Urban Development – not requiring a financial commitment, but collaboration details to be worked out with Austin ISD and other local partners.

• Approved about $34,000 in fee waivers for various building permits needed for the new People’s Community Clinic to be located on Camino La Costa in northeast Austin. The new clinic will serve approximately 10,000 low-income residents, and clinic CEO Regina Rogoff said in a release, “The fees waived by the council will have a huge impact on People’s and those we serve. It can translate into nearly 200 vaccines for senior citizens or 240 well-child visits to monitor children's growth.”