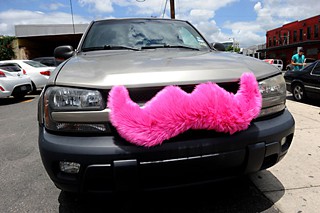 In this week's News Roundup, an Austin man gets $1 million dollars after being punched and Tasered by a couple of APD officers; Austin landlords can refuse to accept Section 8 vouchers, for now; and the Lege contemplates letting Uber and Lyft drive across the state.

• On Thursday, March 5, after three days of testimony and one full day of deliberations, the city of Austin was told to award a total of $1 million to Carlos Chacon when a jury determined that APD Officers Eric Copeland and Russell Rose violated Chacon’s rights under the Fourth Amendment. The seven-person panel also decided that the two officers weren’t objectively reasonable in their efforts against Chacon on the night of April 29, 2011.

Chacon, 56, called police that evening after discovering what looked like a prostitution ring at a Motel 6 on I-35. He reported that a gun was present, and indicated that – at the time he saw it – it was in the possession of a black man wearing shorts, a black hat, and a t-shirt.

Chacon was driving his BMW around the motel’s parking lot when the officers arrived; the officers drew their guns at toward the car and told Chacon to exit. Chacon initially showed his hands but briefly pulled them back into his vehicle to put the car in park. The two officers approached and grabbed him as he was exiting, taking his body to the ground. A scuffle ensued, and Copeland landed two punches. Rose fired at Chacon with a Taser. Chacon was initially arrested for resisting a personal search, though never indicted.

Copeland and Rose’s chain of command reviewed footage of the arrest and found it acceptable. Chacon filed his civil lawsuit against the officers and the city of Austin in March 2012 alleging inadequate training or supervision and negligent hiring and retention.

The day before in an unrelated case, Gene Vela was found not guilty of assault on a public servant when a jury found him not guilty in an arrest stemming from Nov. 2013.

Vela, 31, was shot by police after threatening them a weapon when officials were called to his home by neighbors asking for a check up on his well-being. Vela’s attorneys argued successfully that the responding officers did not properly identify themselves when they showed up at Vela’s door, and their client had the right to act accordingly. Attorneys also noted that Vela, a former Marine, was experiencing severe post-traumatic stress disorder at the time, and believed that an attack was being made on his apartment. – Chase Hoffberger

• Only in effect for one week, Austin’s source-of-income ordinance – originally set to be enacted on Jan. 12 – has once again been halted. On Friday, the (mostly conservative) U.S. 5th Circuit Court of Appeals granted the request for an emergency injunction filed March 2 by the Austin Apartment Association, who recently failed to persuade U.S. Judge Sam Sparks that the measure is unconstitutional. The ordinance is meant to widen housing opportunities for the working poor, the disabled, veterans, and the elderly by requiring landlords to accept recipients of child support or government subsidy, including the U.S. Housing and Urban Development's Housing Choice Voucher program, commonly referred to as Section 8. In a surprising conclusion for some – considering his tone toward the city – Sparks denied the AAA’s motion for preliminary injunction on Feb. 27, finding the group’s claims insufficient to demonstrate a substantial likelihood of success on the merits, as the Chronicle previously reported.

But now, the 5th Circuit’s ruling has thrown a wrench in the ordinance’s enforcement, putting it on hold yet again until full arguments are heard. Rehashing largely the same claims from the outset, AAA continues to argue they will suffer “irreparable harm” if the rule is enforced. “There are sound business reasons why more property owners do not participate in Section 8 and they have nothing to do with the potential residents,” said AAA President Robbie Robinson in a statement. “The program is historically troubled, bureaucratic, and underfunded. Every property owner wants good residents; what we don’t want is a forced partnership with a governmental agency that significantly impacts businesses and operations.” – Mary Tuma

• A state representative wants you to be able to take an Uber from Austin up to Amarillo and back again, without any fears about riding at all illegally. On Friday, Rep. Chris Paddie, R-Marshall, filed House Bill 2440, a bill that would make transportation network companies like Uber and Lyft legal throughout the state if they file an annual $5,000 fee and follow a string of various rules. The Texas Tribune has a full story on the bill; it reports that Paddie’s bill wold make state background checks less stringent than those currently employed by cities that allow the transportation option. Currently, TNCs are allowed in Arlington, Austin, Corpus Christi, Dallas, Fort Worth, and San Antonio. Uber specifically is active in Amarillo, El Paso, Houston, and Lubbock.

Meanwhile, in related news, Friday saw the announcement of Uberpool, a carpooling-like option that Uber plans to employ during South by Southwest. And Lyft reports that it has become the first ridesharing partner at Austin-Bergstrom International Airport. Previously, TNCs were legally barred from making trips out to the airport, though the companies would often provide tutorials to drivers on how best to operate there under the radar. A spokesperson at the airport said that any TNC operating at the airport must agree to a 10% concession fee on gross revenues. Lyft agreed to those terms on Friday after 5pm; Uber has yet to comply.– C.H.

• Zucker on This: The draft, or “working version,” of the “Zucker Report” – a systems analysis of the city’s Planning and Development Review Department, produced by the consultant firm Zucker Systems – was released last week, in response to public and City Council pressure after the department declined to do so, saying the raw report was unfinished. The exhaustive report was still undergoing staff review and response, Assistant City Manager Sue Edwards wrote concerning posting the working version to the department website: “While I disagree with releasing draft versions of consultant information without proper vetting, it’s important for me to make it clear that this entire process was done with the utmost professionalism and integrity.” An additional prefatory note says that the standard pre-release review is a departmental edit to remove “factual errors.”

In brief, the report recommends investing $3.5 million in additional staffing and improvements, including 464 recommendations, of which 121 are priority items. The posted working version includes staff responses ranging from correcting typos to disagreements or elaborations about the findings. Edwards wrote that the final version is expected to be ready for release in late March.

While there is plenty of grist to be ground in this particular, 700+-page mill, the takeaway thus far has been that the PDRD is not popular with Austinites, either outside or within the department. The consultants surveyed PDRD “customers” – persons who applied for permits or had other direct interactions with the department – and report “the negative responses … are the worst [Zucker has seen] in our national studies, including several Texas communities.” Of the employee survey on departmental conditions, the consultants report: “These are the worst scores we have ever recorded in our various studies. … Employees are very unhappy about the direction and leadership in the Department.” The consultants also met with “stakeholder groups” – “two Chamber groups, nine industry-related groups, four meetings with many groups of neighborhoods, and one special interest group” (various advocacy organizations) – but did not attempt to characterize the overall response (perhaps because the complaints were so polarized, e.g., developers get whatever they want vs. established neighborhoods get whatever they want. Welcome to Austin politics.) – Michael King

• Homeless Snapshot: Last week, the Ending Community Homeless Coalition announced the results of its Jan. 23 “Point-in-Time” count of Austin and Travis County homelessness. More than 400 volunteers counted both sheltered and unsheltered (living on streets or in greenbelts, etc.) homeless persons to provide a “snapshot” of people experiencing homelessness on one day. ECHO announced the total number of homeless people counted was 1,877, of whom 1,210 (64%) were sheltered. This is a decline of 6% from last year’s count, matching the average yearly decline over the last four years. Overall, ECHO reports, there are 29% fewer people experiencing homelessness in 2015 than in 2009, and in 2013 and 2014, local programs helped 1,280 people secure permanent housing. For the first time, the PIT count distinguished numbers by City Council district; 40% of the homeless (265 people) were counted in District 9 (Central/Downtown). – M.K.

• Honoring Selma: "The Americans who crossed this bridge were not physically imposing. But they gave courage to millions. They held no elected office. But they led a nation. They marched as Americans who had endured hundreds of years of brutal violence, and countless daily indignities — but they didn’t seek special treatment, just the equal treatment promised to them almost a century before.

"What they did here will reverberate through the ages. Not because the change they won was preordained; not because their victory was complete; but because they proved that nonviolent change is possible; that love and hope can conquer hate." – President Barack Obama in Selma, Alabama, March 7, marking the 50th Anniversary of the "Bloody Sunday" civil rights marches from Selma to Montgomery. – M.K.

This post has been updated to clarify details concerning Lyft’s agreement with ABIA.