Abortions in the Name of God

Dr. Willie Parker considers himself a devoutly religious man. The Alabama-based physician abides by the Bible’s words, and lives according to his deeply held spiritual values of Christianity. 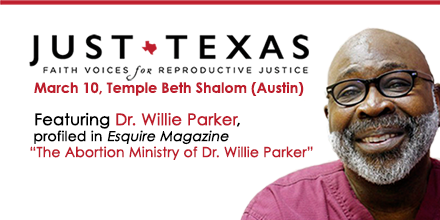 The most essential value of his religion, says Parker – one that he believes is universal to any major faith tradition – is compassion. And Parker, a trained OB-GYN and family planning health care provider, shows his compassion by providing abortion care to women when they have unplanned pregnancies or lethally flawed ones. While religious-right and conservative activists in Texas and elsewhere may shudder at the thought, Parker performs abortions because he is a Christian, not despite it.

“It’s not mutually exclusive to do the work that I do and hold the values that I hold,” he told the Chronicle in a recent phone interview. “The Bible tells us to love our neighbors with all our strength. Neighbors also mean struggling women who are going through times that are very complicated for them.”

As part of a second religious awakening and a realization that reproductive justice would be his own civil rights struggle, Parker began providing abortions full-time, to provide care for the most needy and most vulnerable women. A physician of more than two decades and abortion doctor of 10 years, Parker makes the drive to Mississippi’s Jackson Women’s Health Organization twice a month – the last remaining abortion clinic in the state. After a series of harsh reproductive health and “TRAP” laws enacted with the support of active anti-choice activism, the clinic is the only one surviving.

Parker – once a Baptist preacher in his teenager years – and other faith leaders from Protestant, Jewish, Roman Catholic, and Unitarian faiths plan to gather on Tuesday, March 10 at Temple Beth Shalom to help launch a new statewide campaign in support of access to reproductive health care for all citizens. The physician will address an audience that knows all too well the ramifications of ideologically driven health laws. Still in limbo at the 5th Circuit Court of Appeals (the same appellate court that held the Jackson clinic’s fate in its hands), the final provision of Texas House Bill 2 is expected to close all but seven abortion clinics in the state.

Parker has experienced the consequences of diminished abortion care access and seen the “desperate measures” women take to terminate pregnancies. His patients, many of whom are low-income, minority women, come to him after attempting to end their unwanted pregnancies with black market, online abortion-inducing medicine, or by self-injury. Echoing Texas clinic leaders, Parker says anti-choice laws don’t prevent abortion – only legal, safe abortions. For those local lawmakers who use their religious faith as a defense for onerous abortion regulations, Parker insists they be guided by humanity, not ideology.

“I would steer them back to the notion that they should govern from a place of fairness and compassion,” said Parker. “The true art of statesmanship is to hold those deeply held convictions and then to do what’s in the best interest of all people even if it doesn’t necessarily agree with your specific understanding of the world.”

He continued, “They are distracted by their narrow beliefs. I’ve never seen Jesus’ behavior or the behavior of major religions ever justify intentionally harming another person or creating circumstances that don’t allow people to take care of themselves. That is nothing but misguided.”

As Texas faces an uphill battle to secure reproductive justice for its citizens, Parker offers words of hope: “Whatever you do, don’t lose heart – there are others standing with you in solidarity.”

The “Just Texas: Faith Voices for Reproductive Justice,” event, co-sponsored by the Texas Freedom Network, Religious Institute, Catholics for Choice, Texas Unitarian Universalist Justice Ministry, and National Council of Jewish Women, will be preceded by an advocacy training session at the First United Methodist Church’s Family Life Center (Lavaca & 13th), and a series of legislative visits to the Capitol. 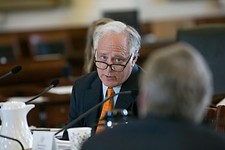 Lege Lines: Toxic Masculinity Drops the Hammer
Standing up to anti-choice rhetoric during a three-bill frenzy at the Capitol