News Roundup: Never Give Up

In this week's News Roundup, some Texas lawmakers are doing their damnedest to shove the marriage equality rabbit back in the hat; notorious piñata foes F&F Ventures are still looking for a profitable use of the now empty space; Council has a busy week planned; and more.

• Those involved in Texas’ first gay marriage are facing even more pushback. Freshman Tea Party Rep. Tony Tinderholt, R-Arlington, has filed a complaint with the Commission on Judicial Conduct to investigate the actions of District Judge David Wahlberg, who allowed the issuance of the license. Tinderholt claims Wahlberg failed to notify the attorney general of a constitutional challenge, which requires a 45 day wait to enter a final judgment. However, the newly married couple's attorney Charles Herring counters the complaint on three grounds: First, Wahlberg issued a temporary restraining order, not a final judgment. “We never sought or obtained a final judgment. Instead, we sought an emergency temporary relief. Therefore, no deadline yet applied, and neither we nor the judge violated the statute,” Herring tells the Chronicle.

Secondly, the supposed infraction of the code (422.010) Tinderholt references was ruled unconstitutional by the Texas Court of Criminal Appeals as a violation of the separation-of-powers provision in the Texas Constitution. And lastly, Herring considers the complaint frivolous on its face. “Even when judges err in ruling on a legal issue, that is not grounds for a judicial-conduct complaint. That’s why we have appellate courts, to consider trial court rulings,” he said. “[The complaint] is apparently motivated by more of his right-wing demagoguery that is out of step with history and wrong as a matter of constitutional law.”

The complaint comes after Attorney General Ken Paxton filed two petitions with the Texas Supreme Court to invalidate the marriage of Sarah Goodfriend and Suzanne Bryant (the second because it appeared Paxton wasn’t clear that the first motion wouldn’t impact the couple’s matrimony) and the introduction of a new bill authored by Rep. Charles Perry, R-Lubbock, that would transfer the power to issue marriage licenses from the county to the secretary of state. – Mary Tuma

• More bad news for the wrecking ball crew: A rep for F&F Real Estate Ventures, the company that recently demolished the long-standing Jumpolin piñata store on the Eastside (without prior notice, Jumpolin’s owners and their attorney contend), reached out to a food truck trade association with a sweet deal: use of the now-cleared, post-demolition lot for its clients during this year’s SXSW and for months thereafter – rent-free! But Tony Yamanaka of Food Trailers Austin – roughly 350 food truck operators whom he helps find gigs – passed on the offer. He told the Chronicle, “After mulling over the offer – for about five minutes – I called and told them it’s not a good idea for us to get involved. It was a conflict, morally, for me to get involved. And If they get protested and then the trucks appear on the front page of the newspaper, I don’t want to be the one who lured the food trucks out there.”

Jumpolin supporters have vowed to protest en masse during whatever event the new property owners stage during this year’s SXSW at the site of the destroyed Latino-owned piñata business at 1401 E. Cesar Chavez. (Jumpolin has temporarily relocated to 4926 E. Cesar Chavez.) The company’s food truck proposal comes in the wake of New York City-based party planners Splash Inc. cancelling their plans to stage a party after feeling pressure from the community to withdraw. While the post-demolition site seems to have achieved pariah status, its owners still stand to profit from the presence of the annual music and arts festival, via its residential properties at 93 Navasota and 206 San Marcos. Fourteen listings now appear on Airbnb advertising rooms at both houses for rent during SXSW. Depending on location, the price tag to rent a whole house: $1,500 and $1,800 per night. – Tony Cantú

• Rumors that the city will permit roughly 105 temporary events during South by Southwest have been greatly exaggerated. On Friday, Austin Center for Events administrative manager Bill Manno told the Chronicle that his conglomerative office – a city-initiated effort founded in 2012 to place all representatives from all integral city departments into one centralized location in preparation and during major civic events – hasn’t yet finalized the total number permits it plans to issue and won’t hinge that figure on any intended figure. The presupposed 25% downsizing that had everybody talking through February actually only had to do with the number of applications it would accept in total.

ACE stopped accepting applications for events on Feb. 10 after it received 147 requests. Manno said the city received 168 last year for the week of South by Southwest. “A 25 percent reduction would have been about 124,” he said in reference to this year’s March melee. “We ended up with 147. Everybody knew 124 was a soft target.” Same goes for the number of events that will eventually get approved. Manno said whatever number ACE targets would likely change once it obtained a better understanding of the circumstances for each event. “It all depends on the size. We knew we could go over [124] anyway if there were applications for small, private events that didn’t have much of an impact.”

The city posted a list of applicants to its website last week. Manno said Friday that ACE had just conducted what he hopes would be its final planning meeting with a potential event, and that he’s still not sure when a finalized list would come to fruition. “We’ve been meeting like crazy with the promoters and organizers,” he said. “There are a few sites that have issues we’re trying to work through.” – Chase Hoffberger

• Have We Met Before? There are three formal City Council meetings scheduled this week: a two-session policy workshop today (Mar. 2), a Tuesday work session, and Thursday’s regular meeting (Mar. 5). It’s possible that the committee meetings will also begin this week – the schedule remains in flux – and once that happens, the tentative plan is to hold executive sessions Tuesday afternoons (following the work sessions) and to alternate the regular Thursday meetings with Thursday sessions devoted to zoning cases. While it doesn’t look like that will happen this week, the Mar. 5 agenda lists a paltry 35 Items – with luck allowing a relatively early adjournment, as the Feb. 26 session nearly broke midnight.

There still might be plenty of wrestling, as the agenda includes a few items likely to raise sand at least in some corners of the dais. The Garza Ranch zoning case returns (approved last week only on first reading), with the public hearing closed but Council split on the best outcome. If that doesn’t cause enough heartburn, approving $60 million in spending on an additional 240 Onion Creek floodplain properties will be an early test of Council principles and regard for precedent. And speaking of heartburn, the Decker Lake/Long Metropolitan Park golf course proposal (postponed last week) returns, bearing a new deep-drilling water plan and battle lines drawn between economic development and environmental forbearance.

Tuesday’s work session might reveal a few hands in advance. And in the meantime, Monday’s policy workshops are: (1) Austin Resource Recovery (9-11am) and (2) Austin Energy (12:30-2:30pm). Consider those times approximate, as these will be contentious subjects and the message board is already jockeying with who constitutes experts (or counter-experts). – Michael King

• Yvette Smith, who was shot to death last year by a Bastrop County Sheriff’s deputy, is now listed on the Texas Attorney General’s Custodial Deaths Report. The Chronicle reported last week that her name had been missing from the list, which is supposed to include any death that results from a peace officer’s use of force. The omission was due to the Bastrop County Sheriff’s Department’s previous belief that they were only required to report deaths that occurred “in custody, control, restraint, or under arrest at the time of death." – Amy Kamp

• ABCs for Infant Sleep: The Travis County Medical Examiner’s Office reported that in 2014, there were 13 infant suffocation deaths in the county, including 11 associated with bed-sharing – the highest number of infant sleep-related deaths since 2010, and six occurred during the winter months. The MEO is urging parents not to sleep with their babies nor to use blankets with infants – instead recommends a sleep sack or one or two layers of a long-legged, one-piece sleeper, not so warm as to make the infant perspire. The American Academy of Pediatrics recommends the “ABCs” for sleeping babies: (A) Alone (room-sharing rather than bed-sharing); (B) on their Back, not on sides or tummy; (C) in a Crib (safety-approved). – M.K. 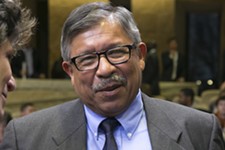