Email From the Mayor 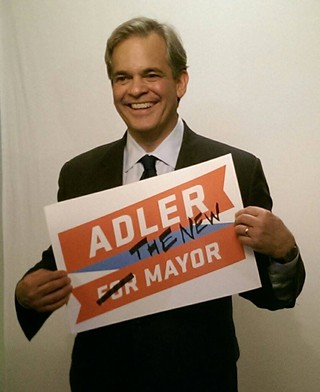 In an unusual move, Mayor Steve Adler emailed an open letter Wednesday, asking supporters to contact City Council supporting “Item 40” – today's proposal to “add additional staffing and resources for the Mayor and Council offices.” The proposal had a rocky rollout – beginning as a bid for private funding – and may be a close question at Council today.

The mayor’s decision to ask for direct public support on a particular Council vote may not be unprecedented, but Newsdesk can’t recall a similar occasion during the last few years. It’s apparently prompted by a strong public backlash against the proposal in its original form – an expanded “Better Austin Foundation” that would raise private funding for additional mayoral staff – and persistent Council skepticism this week over the necessity of expanding the footprint of the mayor’s office, this time through reassigned city staff positions that are already funded in the existing FY2015 budget but currently vacant – as well as shifting $25,000 to each Council member's office for "enhanced constituent services."

The revised version (without private funding) appeared to find more support at Tuesday's work session, but several Council members – District 2 CM Delia Garza, Mayor Pro Tem Kathie Tovo, and D8 CM Ellen Troxclair – sharply questioned the mayor on the need for the change, whether it would create an imbalance of power on Council, and whether other budgetary needs down the line would be superseded by the shift in funding. There was also some sentiment that the proposal should first be reviewed in one of the new Council committees, perhaps Audit and Finance. Adler may be anticipating a narrow vote at Council today, for a resolution (co-sponsored by CMs Leslie Pool, Sheri Gallo, and Ann Kitchen) to direct the city manager to "identify funding options" for such a change – although in his letter, Adler describes the resolution as already acting to "add additional staffing and resources for the Mayor and Council offices."

In addition to whipping today's vote, the mayor’s email may also be in part a response to a fairly blistering open letter circulated by Terrell Blodgett, Professor Emeritus at the LBJ School, who wrote to the mayor (see below) saying he thinks expanding his staff – either through outside funding or with reassigned city staff – is a bad idea, and violates the spirit of the new 10-1 Council as well as the structural integrity of the city’s existing Council/Manager form of government. Although Blodgett wrote that he had supported Adler for mayor, he “did not expect that [Adler] would try to run the city singlehandedly.”

The text of the mayor’s email – sent from his campaign account – follows:

As you know, change is never easy. Austin is constantly changing – we see it in the cranes on our skyline and in long-time friends who are moving on because they can no longer afford to live here. I’m writing to ask you to e-mail our City Council to ask them to vote YES tomorrow on Item 40, which will add additional staffing and resources for the Mayor and Council offices.

Now, we are seeking to enact that change in City Hall by enabling the City Manager to give me and the other Council Members the tools to pursue big ideas and initiatives that will help us finally make progress on festering issues like traffic, growing unaffordability, our broken permitting process, and our looming water crisis. Recently, the Austin American-Statesman said that Austin is now the most economically segregated large city in our nation.

I need your help to remind our City Council that you chose change! On the campaign trail, I talked about inertia being one of the biggest threats to enacting change. The forces of the status quo would prefer to keep things as they are, with us continuing to fall behind on our biggest challenges. We can’t let that happen.

Tomorrow, City Council will vote on keeping things the same or moving forward in a new way. I know where you stand, and I need your help letting others know that the change we promised hasn’t been forgotten. It will only take a little time to remind your district council member and all of the council members that you would like them to vote YES on Item 40.

Thank you for your help.

The text of Blodgett’s letter is as follows:

AN OPEN LETTER TO MAYOR ADLER AND THE AUSTIN CITY COUNCIL

I am aware, Mr. Mayor, that when we talked recently, I agreed to drop the questions I had raised on your initiatives but you keep bringing up new ideas that I feel must be addressed. I voted for you and raised money for you, but I did not expect that you would try to run the City single-handedly. You have told me and others that you are not trying to change the form of government but your actions raise questions in many of our minds.

We have a council – culturally diverse as the city, with a wide variety of experience in their background. You have a city manager and 10,000 dedicated employees. The voters at the last election expressly rejected the idea of concentration of power and instead, voted for dispersion of such power. Thus, we expect you to be a leader with big ideas, but not a person who has to dominate every aspect of city operations – with a staff that overwhelms the council and manager. There really is an important role for the council and the administrative staff.

You continually refer to having a bigger burden with the adoption of the 10-l system. I remind you that, with the exception of Austin’s incremental growth, you have no more constituents than did Mayor Leffingwell or the mayors before him. He presided over roughly 800,000 citizens and you have the same number.

Secondly, with all due respect, I think repeated references to LA and NYC are meaningless. We have 2 cities in Texas that Austin can and should compare itself to. Both San Antonio and Dallas are considerably larger than Austin and operate under the same council-manager form as does Austin. Both are world-class cities as we strive to be.

Mayor Rawlings in Dallas, WITH NO MORE AUTHORITY THAN THE AUSTIN CHARTER GIVES YOU AND NO MORE STAFF THAN PREVIOUS AUSTIN MAYORS HAVE HAD, has given strong leadership in Dallas, challenging the educational establishment and making progress, with strong DALLAS NEWS support, in integrating South Dallas (the East Austin of Dallas) into the economic mainstream of the city. And now, Dallas has been given international recognition for its architecture in its proud Museum District. These are successes in Dallas which have been accomplished with a minimum staff and authority in the mayor’s office.

San Antonio, with a history of over 60 years of council-manager government, has had a succession of outstanding mayors, dating back to Lila Cockrell, Henry Cisneros, and Julian Castro. In contrast to Dallas – business oriented, home of the “Big Rich” – San Antonio is ethnically diverse, has a lower per capita income, and a much larger geographic area to govern. Again, the mayor’s office has a minimum staff and the MAYOR HAS NO MORE CHARTER AUTHORITY THAN YOU DO. The two commonalities in city governance which the two cities share is they operate with a shared governance model – the mayor, the council, and the city manager AND the two mayors “lead" not by overwhelming the city council and the manager but by force of their personality and leadership style.

I am particularly concerned now over your wanting to use vacant positions in the city to staff your office. Those positions were established because of a specific need; you put the city manager in an impossible position when you unilaterally request that he transfer employees to your office. You also upset the balance of power between your office and council members – and the city manager.

I urge this City Council to question why you need a staff of 15 or 20 persons when previous Austin mayors and current mayors of Dallas and San Antonio have and are succeeding with a fraction of that number. If it is indeed contemplated to move vacant positions to the mayor’s office, I also urge the Council to require that this be done in a formal, transparent way.

It has been reported that you have told council members that you will make these proposed staff positions in your office available to council members, but they will certainly be beholden first and foremost to you. And it might be noted, council members now have one-tenth the number of constituents compared to former councils.

In your campaign, Mr. Mayor, you stated that you would take 100 days to assess the situation and learn the ropes of being mayor. You have now been in office less than half that time and you are already proposing major changes to a government that has operated successfully for more than 90 years in this model. There’s only one holdover on this council. The new office responsibilities which the other 9 have are unlike anything that many of them have experienced. I urge you to step back and give this new council and yourself time to get “up to speed” on the many complexities of city governance.