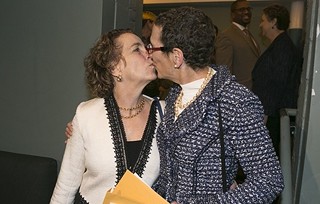 In this week's News Roundup, A.G. Ken Paxton continues his fight against the wedded bliss of two Austin women; a judge throws out activist Antonio Buehler's civil suit against the city and APD; Mayor Steve Adler abandons his plan to privately fund some governmental functions; and more.

• The Fight for Marriage (In)Equality: Attorney General Ken Paxton has continued his dogged attempt to perpetuate inequality by tearing apart the new – and historic – marriage of Austin women Sarah Goodfriend and Suzanne Bryant, who quietly wed Thursday morning in Travis County, the first gay couple in Texas to do so. The same day, Paxton secured a temporary stay from the Texas Supreme Court preventing any future same-sex marriages in the county; however, the stay did not impact the couple's marriage. Unsatisfied, Paxton filed again with the court the following day to directly dissolve the couple's marriage, which was sped through, in part, due to Goodfriend's “medically fragile” state (she has ovarian cancer).

Paxton claims Travis County Judge David Wahlberg “abused” discretion and took “rogue action” when granting the order that allowed the county to issue the license by not notifying the AG, by not following current state bans against marriage equality or waiting until other gay marriage cases are resolved; the marriage should be void to prevent “legal chaos,” he argues. “This ruling may cause same-sex couples to seek marriage licenses across the state, and county clerks may mistakenly rely on that order to begin granting such licenses. If that occurred, the harm to the couples, state officials, and the general public would be difficult if not impossible to undo,” Paxton writes in his petition. Attorney Charles Herring and County Clerk Dana DeBeauvoir remain steadfast in upholding the marriage’s legality, refuting Paxton’s claims of invalidation. Giving the anti-LGBT attorney general a boost, Rep. Charles Perry, R-Lubbock filed legislation Friday (SB 673) that would redirect the process of obtaining a marriage license to the Texas secretary of state’s office instead of county clerk’s office – a pointedly hostile reaction to the lesbian newlyweds. (Rep. Cecil Bell, R-Magnolia, filed a House companion bill, HB 1745.)

• Friday afternoon, U.S. Magistrate Judge Mark Lane dismissed the civil lawsuit Peaceful Streets Project co-founder Antonio Buehler had filed in 2013 against the city, APD, Chief Art Acevedo, and four APD officers. Lane cited a Fifth Circuit ruling that grants city entities qualified immunity if a grand jury determines that the individual filing suit had probable cause to be arrested. Buehler filed the lawsuit on Dec. 31, 2013, in the wake of three arrests and one other run-in with APD Officer Justin Berry. The 37-year-old police accountability activist was initially no-billed for the immediate charges filed in the three arrests, but a grand jury decided to indict him on four counts of failure to obey a lawful order. He was acquitted on the first charge – stemming from his controversial NYE 2012 arrest. In the past two months, city judges have dismissed outstanding charges.

Buehler said that he plans to appeal Lane’s dismissal, citing Lane’s own acknowledgement that other circuit courts don’t agree with the Fifth Circuit, but he conceded that it could take years before a decision is finalized. Check Thursday’s paper for more.

• The Statesman reported Saturday on a statement by a key witness in the upcoming manslaughter trial of former APD Det. Charles Kleinert. According to the paper, Regina Bethune told investigators that “a police officer, who commandeered a car in the frantic moments before he shot and killed a man, was out of control and he said the suspect he was chasing wasn’t dangerous,” a description similar to what the Chronicle reported August 8, 2013. Bethune, who was driving the car Kleinert commandeered, also told investigators that “she saw a man she thinks was Jackson walking at what she described as a ‘normal pace’ and that he ‘did not appear to be fleeing.’”

Kleinert’s trial had been scheduled to begin April 20, but a motion filed late last year asking the case be removed to federal court has delayed proceedings – that motion is scheduled to be heard by U.S. District Judge Lee Yeakel on April 9. For more on the case, see this week’s issue of the Chronicle.

• U.S. Attorney General Eric Holder suggested last week that all executions be put on hold while the Supreme Court considers Glossip v. Gross, a case involving Oklahoma’s lethal injection procedure. Holder, a longtime critic of the secrecy that’s often inherent in lethal injections, stressed that the suggestion was his own and not representative of President Obama’s administration. He added that he believed the United States’ justice system is the best in the world, “comprised of men and women who do the best they can, get it right more often than not, substantially more right than wrong. But there’s always the possibility that mistakes will be made …. There’s no ability to correct a mistake where somebody has, in fact, been executed.” That’s something that will come under the spotlight in Texas over the next two weeks, as the state prepares to execute Rodney Reed, a man many believe did not actually kill 19-year-old Stacey Stites, on March 5.

• You Say Ram, I Say Lamb: “Happy New Year!” was the refrain at the Friday luncheon sponsored by the Greater Austin Chamber of Commerce at the new Downtown Marriott, in honor of visiting Republic of Korea Ambassador Ahn Ho-Young. (The Korean New Year began Feb. 19.) Preceded by Chamber President Michael Rollins, Asian Chamber President Paul Kim, Mayor Steve Adler (who presented Ahn with the key to the city), and introduced by Consul General Park Suk-Bum, Ambassador Ahn focused on the economic connections between the U.S., Texas, and South Korea, which he described as growing rapidly in the last decade, especially since the arrival of Samsung Austin Semiconductor. Numbers were flying about the amount of economic exchange between Austin and Korea, including the mayor noting that in 2013 alone local exports to Korea amounted to $2.9 billion, or 32% of Austin’s export trade (much of that attributable to Samsung’s in-and-out chip fabrication). Kim said that approximately 10,000 Koreans live in Austin, and he made a point of thanking Texans for their help in the Korean War. Ahn said that Samsung’s $15 billion investment in Austin is the largest in the U.S., and asked the assembled businessmen and dignitaries, “Let’s keep on working together.” In response to a question from Congressman Lloyd Doggett, he sketched out the contemporary history of thawing relations between Korea and Japan; in response to another from Richard Jung, he said there is “no daylight between Korea and the U.S.” on China policy, most specifically on encouraging the Chinese to use their influence on North Korea concerning nuclear weapons. He also wished the audience a Happy New Year of the Lamb, effectively confirming that some say "Lamb," some say "Ram" … and "Sheep" is popular too.

• Waiting on Obama: Doggett spoke briefly with Newsdesk following the Chamber lunch, saying that he had been somewhat disappointed that the Obama administration had not been immediately ready to respond to the much anticipated South Texas judicial decision to block the president’s relaxation of enforcement of some immigration laws (“Judge Blocks Immigration Reforms,” Feb. 20). But he applauded the president’s decision to seek a stay of the judge’s order, and the planned immigration town hall scheduled to take place in Miami next week. Doggett also called attention to the Republicans’ attempt to hold Homeland Security funding hostage to the immigration issue, saying that whatever one thinks of the overall security policies, the Department provides “vital services” and employs many government workers, whose lives will be disrupted if the agency is not funded. “The GOP promised to put an end to these [Sen. Ted] Cruz-style shutdowns.”

• Mayor Pivots: Also following the Marriott event, Mayor Steve Adler said, “I’ve done a full pivot,” referring to his withdrawal of his proposal to fund additional mayoral and City Council staff through an expanded Mayor’s Better Austin Foundation. Adler had originally proposed to expand the number of trustees and staff for the foundation, in order to raise supplemental funds for special projects and to expand the administrative and service capabilities of the Council. But there was substantial backlash from other Council members and the public – particularly to the private funding of public functions – and late Thursday Adler told the Austin Monitor’s Jo Clifton that he had “moved past that concept.” Adler reiterated the change to Newsdesk Friday, saying that he believes funding it through the city budget is in fact “better policy,” and the new plan reportedly calls for moving some vacant budget staff lines into the mayor’s office, and amplifying each Council budget with $25,000 for additional constituent services or other purposes – without new cost to taxpayers. The new version should be discussed at Tuesday’s work session and the matter is on the Feb. 26 agenda for possible action; some Council members also expressed concern that expanding the mayor’s staff could create a power imbalance among the 11 members. But Adler said he was pleased by the shift in funding perspective, and when it was wryly suggested that perhaps this was his strategy in the first place, he laughed and said, “I’ll take the credit for it.”