When Is Austin Not “Austin”?

Earlier this week, Kirk Goldsberry posted an essay on the FiveThirtyEight politics site responding to recent research reflecting the decline in Austin’s African-American population, even while the city's overall population is rapidly expanding. In sum, Goldsberry says, "It just ain’t so."

In his post titled “It’s Foolish to Define Austin by Its City Limits,” Goldsberry is responding to research by UT-Austin's Eric Tang and Chunhui Ren reporting that Austin is "the only major city in the United States to experience a double-digit rate of general population growth coincident with African-American population decline." (“Outlier: The Case of Austin's Declining African-American Population”) Goldsberry was apparently alerted to the study by Tang’s Washington Post op-ed arguing that nationally, college graduates moving into city neighborhoods are pushing African-Americans out of inner cities, and that Austin is a prime example of the trend.

“But wait. That can’t be right,” writes Goldsberry. “These maps [see below] leave little doubt that there are more African-Americans in this region than there were 10 years ago. Yet the Post piece is claiming the opposite is true. What’s happening here? How could the Post publish a claim that seems to be flatly incorrect?” With several maps, Goldsberry attempts a simple sleight-of-hand – substituting “the Austin region” for “the city of Austin.” Having made that shift, Goldsberry consistently uses “Austin” to mean the entire metropolitan statistical area – allowing him to claim that there are now more African-American residents “in and around Austin” than in earlier periods. That's true – using that very flexible definition. 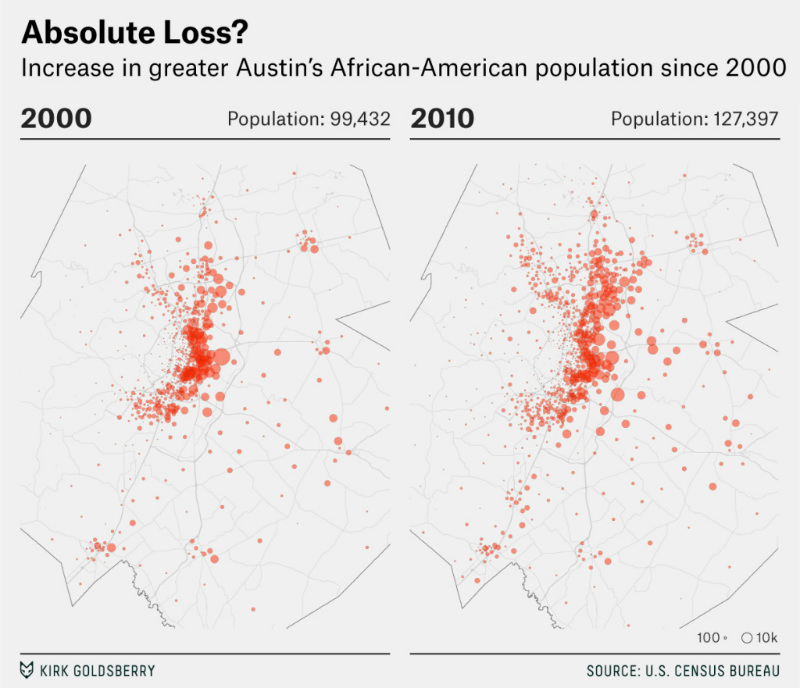 But the actual question raised by Tang and Ren’s research is why long-resident African-Americans are leaving the city of Austin, when the overall population is exploding (up 20.4% from 2000 to 2010) – and that question is not answered by simply re-defining it away.

Goldsberry does cite “gentrification and suburbanization” as the dominant trends, but he’s dismissive of drawing any negative implications from those phenomena. “It’s undeniable that East Austin has experienced rapid gentrification,” he writes, “but that’s not the only force at work here. Yes, the aimless yearnings of capitalism [have] brought condominium complexes, craft cocktails, yoga studios and yogurt shops to East Austin. But the suburbs can be appealing, too. An explosion of new suburban housing options and better school districts have enticed black Austinites to move away from the urban core.”

Goldsberry cites only a single anecdotal example (from the Statesman) of a black professional family moving from the central city for those benevolent reasons. But Tang’s continuing research suggests otherwise – that in fact, “persistent structural inequalities” lie behind much of the current diaspora.

There are, of course, many changes happening in Austin’s population, and many reasons residents choose to move or to settle elsewhere. But Goldsberry’s post says little about the potential significance of those changes, instead explicitly arguing that they’re positive by definition, and that it’s flatly wrong to suggest otherwise: “To assume that ‘college graduates’ have ‘pushed’ people away from the urban core is not only incorrect," he concludes, "it’s irresponsible.”

Newsdesk asked Tang if he had any response to Goldsberry’s piece, and he replied:

I guess my first reaction to the piece is that many African-Americans who once lived in the urban core would strongly beg to differ. That they can no longer afford to live in Austin proper, that they feel pushed out of the urban core and compelled to live in surrounding suburbs outside the city limits marks a big difference to them by way of history, culture, quality of life. This much I've gleaned from the qualitative interviews we've done. To diminish or devalue this difference seems presumptuous at best, callous at worst. Tied to this is the question of affordability throughout the entire city. What happened (is happening) to the African-American community in Austin serves as a bellwether for affordability throughout the city as a whole. Longstanding residents of all racial backgrounds are increasingly finding it impossible to live within the city limits. In other words, it's not just African Americans who are experiencing this (although they have suffered the brunt). We need to keep the city/MSA distinction in order to study and understand broader issues [of] affordability and, inversely, the suburbanization of poverty.

My second reaction is that the author seems to miss the point of the study. Austin's outlier status is not about Black population loss alone, but about how Austin fails to behave like other fast-growing major cities. The takeaway from the study is that when you compare Austin to other major cities with population growth at more than 10% between 2000 and 2010 (and here we were consistent in using city-based [not MSA] census data for these other cities) all of them showed simultaneous growth in African Americans (even Portland – a city often described – not to mention parodied – as being just like Austin). That is, no other city experienced anywhere near the growth of Austin's saw any Black population losses. It's a remarkable distinction, and one that the FiveThirtyEight article conveniently sidesteps.

Finally – and I don't mean to be flippant here – if the city limits do not matter when it comes to racial demographics, then when do/should they matter? The city of Austin keeps a range of city-limited data that is used to influence its city-limited policies and actions. Is the author suggesting that all such city-level data is now irrelevant? Or is only the data that exposes racial and economic disparities irrelevant? Feel free to read between the lines here.

I also asked City Demographer Ryan Robinson, who has closely tracked these local population changes over the years, if he had any reaction to the Goldsberry piece. He responded simply, “We’ve long pointed out that the loss of African-Americans is largely a ‘jurisdictional’ phenomenon – but still very real.”

In short, it may be foolish to define Austin only by its city limits; but it's at least equally foolish to pretend those boundaries – and their legal, economic, and social implications – don't exist.