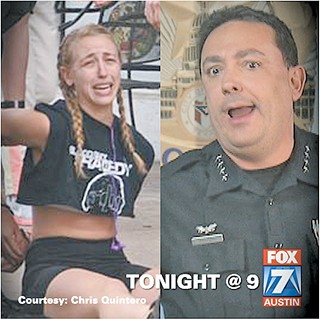 The picture that started it all: Amanda Jo Stephen and Art Acevedo

Phillip Perea, the man who shot and killed himself outside New York City’s News Corp. building Monday, spent the morning handing out fliers that detailed ways in which Fox News, a subsidiary of Rupert Murdoch’s global media conglomerate, ruined his career. Specifically, reports note, he was referring to the deeds of Austin’s Fox affiliate, KTBC.

Perea was dismissed from the network late last May. In July, the Chronicle covered his dismissal in the context of a reported media stonewalling on the part of Austin Police Chief Art Acevedo – a circumstance that came to light after Perea emailed extended soundbites of conversations recorded to video tape between him and KTBC Vice President and General Manager Michael Lewis.

The conversations came about, the soundbites detail, because Acevedo took issue with an unflattering picture of his likeness that Perea, then a promotion producer with the network, posted onto Facebook in the wake of the chief’s much-criticized February press conference following the jaywalking arrest of jogger Amanda Jo Stephen (in which, amidst an emotional week, Acevedo dismissed backlash against his officers’ actions by saying “In other cities there’s cops who are actually committing sexual assaults on duty, so I thank God that this is what passes for controversy in Austin, Texas”).

The transgression put Perea on the outs with his immediate employers and brought about a series of instances in which he was accused of being disruptive, threatening, and insubordinate. At one point, in an effort to demonstrate the ways in which he was being unfairly targeted, Perea hired a ghost-writer to submit broadcast copy on his behalf (in hopes that his bosses would overly edit a superior writer’s stories).

Perea approached us about reporting on the “quid pro quo dynamic between FOX 7 and the police chief” in early June, just as he was beginning production on the YouTube series national media outlets are embedding on their web pages today.

“My career is over,” he wrote when asked if he wanted to associate his name with the accusations. “I have nothing left to lose.”