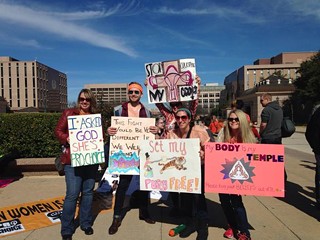 In this week's news roundup, the 42nd anniversary of Roe v. Wade brings the topic of reproductive rights back to the Capitol (not that it ever really leaves); City Council gets ready for its first meeting and at least some debate; and Laura Pressley isn't ready to say goodbye just yet.

“You are why there was a filibuster […] you are who carried Senator Davis through those 11 hours,” Farrar reminded the audience. “But we aren’t done. Right when we think it can’t get any worse, they surprise us. We have a more hostile environment in the Senate, so we are going to need you to be more vigilant than you’ve ever been before.” Farrar then called on activists to closely follow legislation, show up to committee hearings and write to anti-choice Republicans, “Make sure they know you are watching, you are listening, and you are focused,” she said.

Dukes, who revealed her personal abortion story last year, revved up the crowd by motivating them to stay engaged, keep fighting, and not be ashamed to tell their own personal stories. “No matter how much they try to make the term abortion pejorative, we’re going to strip off that scarlet letter A and stand up and remove the stigmatism that has been placed on this and fight for our rights,” she said. (Video of the pro-choice rally can be viewed here)

On the opposite side of the Capitol, a swarm of blue-clad activists converged to applaud speakers who lauded the strides Texas has made to decimate abortion rights. Newly elected Land Commissioner George P. Bush and Texas’ new First Lady Cecilia Abbott headlined the Texas Alliance for Life-hosted Saturday event, which drew an estimated 1,500 anti-choice advocates. Bush criticized the landmark Supreme Court case that legalized abortion as an “infamous” and “horrendous” decision that produced an ongoing “national nightmare.”

Abbott, reading a letter written by her husband, thanked the crowd for pushing to cement Texas as leader of harsh abortion rules, including the package House Bill 2, which has already forced half of Texas abortion clinics to close. If the final provision of the law – currently awaiting a 5th Circuit ruling – takes effect, only seven providers will remain. “Because of you, innocent life is protected after five months, the unborn are spared pain, and safety standards for women are improved,” Abbott said. Other speakers, like Cynthia Wenz of Houston crisis pregnancy center The Source, didn’t skirt around their mission to eliminate the legal procedure altogether – Wenz vowed to end abortion in her lifetime and likened abortion to genocide by saying she hopes the “Holocaust” of our day ends.

• To Each According to His Need: The new City Council takes on its first full meeting agenda this week, with a work session Tuesday and then the first regular meeting Thursday, Jan. 29. At 53 items, it’s not an imposing agenda, but there may be a few speed-bumps in the way of the new Council’s declared determination to keep meetings efficient and short. Council will have to approve some version of its draft proposal to revise the existing meeting and committee structure (Item 26), following its Jan. 22 town hall and miscellaneous feedback online and elsewhere, and that’s likely to eat up time. There are also proposals to establish task forces on “Regional Affordability” (Item 22) and “Community Engagement” (Item 23) that didn’t quite fit into the proposed committee structure, and fairly considerable load of zoning cases. An even touchier proposal turns out to be Mayor Steve Adler and District 1 Council Member Ora Houston’s request to allow Council members to reduce their own salaries and reallocate the money in their office budgets. Adler is independently wealthy and Houston says her state pension is adequate to her own needs; other CMs suggested that as a policy matter (not to mention individual family budgets), dropping some salaries might establish an inequitable precedent. (Instead of passing the resolution last Thursday, as anticipated, they postponed the matter for further discussion at the work session and for consideration to this week’s meeting.) Meanwhile, District 6 CM Don Zimmerman posted a proposal to the Council message board suggesting that the city manager and city attorney no longer share the dais with the Council (to make clear who’s in charge); he also suggested to the Statesman that he disliked seeing so many staff proposals on the agenda (mostly contracts and and zoning matters) that hadn’t first been vetted by Council. If Zimmerman should decide that every consent and zoning item requires full Council analysis and debate before approval … the new, more efficient City Council can kiss early adjournment goodbye.

• Pressley Marches On: Defeated City Council candidate Laura Pressley continues her solitary quest to overturn the results of the District 4 run-off, which she lost to Council Member Greg Casar by 30 percentage points and 1,290 votes. On Jan. 14, Pressley filed two complaints with the Texas Secretary of State alleging violations of state law during the Jan. 6 recount of the Dec. 16 run-off results (the recount precisely confirmed the original outcome). On Jan. 20, state Director of Elections Keith Ingram responded to Pressley’s complaints, dismissing them all. Pressley had made complaints concerning inadequate notice of the recount, concerning Travis County Election Division preparations for the recount prior to her arrival, and requesting a reconciliation of the poll lists with the number of votes cast. (Among thousands of votes, there can be some numerical inconsistencies between the signed poll lists and the number of votes cast, but a reconciliation of those numbers is made on election night, prior to the release of the results.) Ingram informed Pressley that “personal notice” is not defined in the election code, that at her request Travis County reprinted the “ballot images” (cast vote records) in her presence, and that a recount does not require another reconciliation. Pressley is free to file an election contest in court, wrote Ingram, but “none of the facts that you present to us in your complaint appear to involve criminal matters” that would necessitate a referral to the attorney general.

Undaunted, on Jan. 22, Pressley sent Ingram an email, appealing for reconsideration and suggesting several “points of clarification,” reiterating in more detail her complaints concerning the recount procedures. Pressley still failed to provide any evidence of actual discrepancies in the voting results, but continued to insist that the recount did not follow the letter of the law (as she sees it). “We respectfully request,” she wrote, “that these alleged election civil and criminal violations be forwarded to the Attorney General for investigation.”

Later the same day, Ingram responded that the secretary of state can only refer complaints to the attorney general if there is “reasonable cause” to suspect criminal conduct, and Pressley had not in fact alleged “any criminal violations.” He advised Pressley either to file an election contest or speak to her state legislators about revising election law.