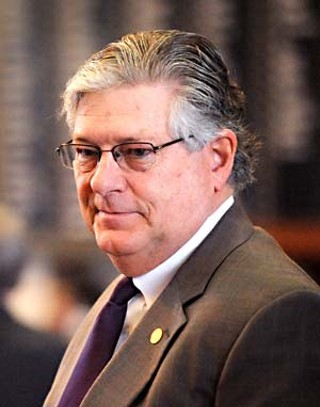 Are state incentives to private business moral? That's a complicated question, and one that two Texas House interim reports at least tangentially touch upon. Guess which fund gets the biggest lambasting? If you said one of the ones under a shadow of corruption, try the old conservative whipping boy of film and video games instead.

Last week, the House Committee on Economic and Small Business Development issued its interim report on how Texas business is doing. The raw politics is that it is basically uncritical of how Texas works with business. Public-private partnerships? Wonderful. Venture capital? Nothing to worry about. The entire thing could probably be set to the tune of "Everything is Awesome", and actually contains passages entitled "We're So Awesome!", "The Boogeyman", and "The Downside of Crankiness". Oh, well, at least it makes a change from the average dry and humdrum report, even if some sections could be penned by the creators of the "Hang in there!" inspirational poster.

Of course, those sections relating to state business subsidies seem designed to create tension. While far drier, it is also far more implicitly critical, calling for the scandal-wracked Emerging Technology Fund to be absorbed into other entities, and the establishment of an independent oversight commission for the Texas Enterprise Fund (which the authors note has been "criticized as a result of perceived politics involved in the process").

These are not unanimous opinions. Committee members are allowed to send letters to the chair, to be included as virtual minority reports. Rep. Borris Miles, D-Houston, sent one to Select Committee Chair Angie Chen Button, R-Richardson, critiquing their report for being too soft on the TEF and ETF. Similarly, Rep. Drew Springer, R-Gainesville, basically rewrote the entire report. Take his attack on the Texas Moving Image Industry Incentive Program (commonly, but incorrectly, called the film incentives). Because there are additional incentives for producers to work in historically underutilized areas, especially in East Austin and Dallas, he sees this as a local incentive program paid for by the state, and not a state program. He calls for its cancellation for film and TV, but then he's OK with it being used to attract game designers.

That's at least a logical argument. In his addendum to the Economic and Small Business Development report, Rep. Paul Workman, R-Austin, goes on a full-frontal assault on TMIIIP. He's not worried about the moral ramifications of the TEF and ETF sending public funding into questionable private ventures with no real oversight. Instead, to quote that great moral guardian Helen Lovejoy, "Won't somebody please think of the children?" He writes, "Texas should not be subsidizing morally objectionable movies [and] Texas should not be providing incentives for video gaming with violent or sexually explicit content that inevitably winds up in the hands of minors."

Here's the thing. The rules already bar funding for any material classified as obscene under state law. Then there was the widely mocked inclusion, at the behest of Sen. Steve Ogden in 2007, that projects not be allowed to portray Texas in a negative light (that was how Alex Jones' acolytes got the incentives pulled from Machete).

Workman goes further, stating that "movie makers know in advance what rating they want and we should bar incentives for 'R' rated movies."

Ah, but if only that were true. As is a matter of public record and historical observation, the Motion Picture Association of America's ratings system is often seemingly arbitrary, erratic, and weighted heavily against independent film makers. Violence is fine, but nudity and strong language sends the guardians of morality into a tizzy. Infamously, the MPAA recently branded innocuous love story Love Is Strange with the box-office deadening R (clearly for deeper reasons than just that the central characters are gay, right?)

Even innocuous, non-political, non-controversial documentaries, such as Conan O'Brien Can't Stop, Murderball (which was partially shot in Texas), Exit Through the Gift Shop, Bully (which was forced to recut so its target audience of students could see it), and Rock School, end up with unexpected Rs. Most famously and recently, a little Oscar contender called Boyhood ended up with an R rating. Anyone want to say that's what Richard Linklater was aiming for when he started shooting a decade ago?