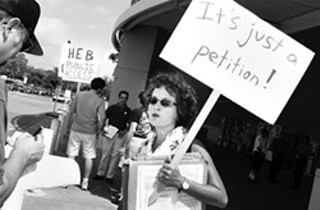 Linda Curtis protests outside of H-E-B in 2002. (Photo by John Anderson)

In this week's News Roundup, the TEA ranks schools, Linda Curtis returns, the city releases its draft report on "Impediments to Fair Housing," and the Fifth Circuit takes on free speech in advertising.

• The Texas Education Agency has released its 2015-16 Public Education Grant list of schools they think kids might want to leave. Statewide, 1,199 campuses, including 11 in Austin ISD, made the list, which gives the students in those schools the automatic right to transfer to either another campus within their school district, or a neighboring district. Considering AISD has an open transfer policy anyway, that's less of an issue than in other districts. However, being on the list does not mean the campus is a failure. While five Austin campuses on the list - Ridgetop Elementary, Martin and Mendez middle schools, and Eastside Memorial and LBJ high schools - are classified as "Improvement Required," the other six - Rodriguez and Widen elementaries, Burnet and Dobie middle schools, and Lanier and Travis highs - met the state standards. So how did six campuses that actually hit the target end up on the list? Because, under TEA rules, old failures are held against a campus. They make the list either by being classified as IR in 2013 or 2014, or by having a STAAR passing rate of less than 50% in any two years between 2012 and 2014.

• "But she doesn't even live in Austin!" For years, local political activists have wondered why Bastrop resident Linda Curtis kept dabbling in city politics, most recently pushing the 10-1 City Council system. Now she's got state ambitions, having filed to run in the Jan 6 special election in House District 17.

She faces two Democrats (Shelley Cartier and Ty McDonald) and two Republicans (John Cyrier and Brent Golemon) for the seat, currently vacant after incumbent Tim Kleinschmidt resigned to become general counsel for the Texas Department of Agriculture. This is one of four upcoming special elections, along with Sen. Leticia Van de Putte's Senate District 26, Rep. Mike Villarreal's HD 123, and HD 13, formerly held by Senator-elect Lois Kolkhorst. The elections have been scheduled so soon with the clear intention of filling the seats as closely as possible to the start of the new Legislature on Jan. 13. However, Curtis (who has never missed an opportunity to paint herself as an underdog) is claiming conspiracy. "Rick Perry is sneaking an election during the Christmas holiday," she declared." Let's not make this The Grinch That Stole An Election."

Curtis is currently head of Independent Texans, but she's joined, formed, and cast off groups like old socks, such as fiscal conservatives Priorities First! and the Patriot Party in 1995, Austinites for a Little Less Corruption and the Reform Party in 1997, Reformers Appalled by Kirk's Ethical Transgressions aka RAKET in 2000, and Clean Campaigns for Austin in 2001. Back in 2002 (when she still lived in Austin) she forced H-E-B to end early voting in their stores (Curtis was mad that the private firm wouldn't let her run petition drives on their property), and she has also been in the background on any campaign that would have her, from Ross Perot for president to Max Nofziger for Council. She has made a surprisingly successful career passing herself off as a political ingenue (as we wrote in 2005, "her studied pose of innocent bystander is getting very, very old").

• Blocked from Housing: On Dec. 22, the city of Austin Neighborhood Housing and Community Development Office released a draft Analysis of Impediments to Fair Housing Choice (also a requirement of HUD funding). The office is seeking public comment on the report, which is available for download at www.austintexas.gov/page/reports-publications, and in print at the Central Public Library, neighborhood centers, and other locations. The report was prepared for the city by Denver-based BBC Research and Consulting; the consultants reported that the city’s data limitations made some conclusions uncertain, but they identified a range of obstacles to residential housing choice, including: the lack of affordable housing's disproportionate impact on minorities and the disabled; historical patterns of segregation; overly complex land-use regulations; and private market practices (e.g., racial “steering”) that limit housing choice.

The report also provides an “action plan” for the city and other local authorities to improve broader access to affordable housing: e.g., CodeNEXT (land code) revision and simplification to enable a greater supply of affordable housing; the creation of a “land bank” and similar policies to make more tracts available for housing; and better metrics and incentives for neighborhood parks, to better distribute parkland throughout the city. Comments are requested by 5pm Friday, Jan. 9. For more information, visit www.austintexas.gov/department/housing.

• Verdict Affirmed: On Dec. 22, a three-judge panel of the Fifth Circuit Court of Appeals affirmed a 2013 jury verdict against Austin-based companies PlastiPure and Certichem, for violations of the Lanham Act, which forbids false commercial speech. A lawsuit had been filed by Eastman Chemical Company – makers of Tritan plastic resin, marketed as an alternative to plastics made with bisphenol A (BPA) – against the two companies, founded by UT-Austin neurobiology Professor George Bittner. PlastiPure, which also manufactures plastic resin, had distributed a sales brochure claiming that Eastman’s Tritan had exhibited “estrogenic activity,” potentially contributing to “hormone-dependent cancers, reproductive abnormalities, and other negative health conditions." A jury found that PlastiPure’s brochure was “false or misleading” commercial speech, and the court granted an injunction against further such commercial statements.

Among other questions, the panel ruled that “Application of the Lanham Act to appellants’ promotional statements will not stifle academic freedom or intrude on First Amendment values. By its terms, the injunction only applies to statements made ‘in connection with any advertising, promotion, offering for sale, or sale of goods or services.’ Appellants may continue to pursue their research and publish their results; they simply may not push their product by making the claims the jury found to be false and misleading.”

On its website, PlastiPure has posted a Nov. 2014 paper that argues “Chemicals having estrogenic activity can be released from some bisphenol A-free, hard and clear, thermoplastic resins,” explicitly including Tritan. For a more complete story on the original trial, see “Eastman Wins; Jury Still Out on Plastic,” Aug. 2, 2013.