News Roundup: No Justice, No Peace 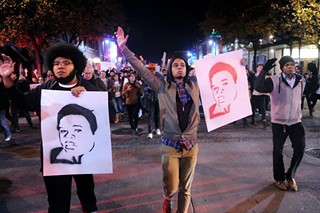 Although the Chronicle staff was on Thanksgiving break, plenty happened last week, from a shooting that could well be described as domestic terrorism, to some of the largest-scale protests since Occupy Wall Street.

• In the midst of everything, don't forget that early voting for the run-off elections begins today. Find a polling location here.

• KVUE-TV reported on Sunday that unidentified law enforcement sources told the station that a shot to the heart by Austin Police Department Officer Adam Johnson killed Steve McQuilliams, who at the time was firing on APD headquarters at 8th and I-35, and had earlier attacked the federal courthouse and the Mexican Consulate. According to APD, Johnson was putting away two police horses when he used his free hand to fire a shot at McQuilliams, although police have not yet publicly confirmed that Johnson’s shot killed McQuilliam. KVUE’s Kris Betts also reported that the Travis County Medical Examiner had found the words “Let Me Die” written on McQuilliams’ chest, and police found “funeral clothes” in McQuilliams’ Barton Hills apartment, laid out on his bed. For more on the Downtown shooter, see “Renaissance Man” on Newsdesk, Nov. 29.

Officer Johnson, who is currently on paid administrative leave – standard procedure when an officer is involved in a shooting – was one of the officers named in a lawsuit filed by Antonio Buehler. Buehler claims that his civil rights were violated by Johnson, who allegedly interfered with Buehler's First Amendment right to film and falsely arrested him for trying to exercise that right. According to KVUE, "the charges were dropped earlier this month." The Chronicle was unable to confirm this claim at press time. Reached for comment Monday afternoon, both Buehler and his lawyer say that, contrary to the KVUE story, Johnson is still a defendant in the suit.

• Protests continued across the country over the holiday. Outraged over the failure to indict now former police officer Darren Wilson for the killing of Ferguson, Mo., teenager Mike Brown, protesters took to the streets last Tuesday, Nov. 25, blocking traffic in many cities.

In New York City, where sympathies run especially high due to NYPD's own record of police brutality, some attempted to disrupt the Macy's parade on Thanksgiving Day. Five members of the St. Louis Rams made their own statement before a game yesterday, Nov. 30: Stedman Bailey, Tavon Austin, Jared Cook, Chris Givens, and Kenny Britt came out on the field making the "Hands Up, Don't Shoot" gesture that's become a common protest pose after Brown's death. Britt made his intentions more explicit by posting a picture on his Instagram account with the description, "This game was dedicated to #MikeBrown, his family and the Community of #Ferguson. #WeStandWithYou #MikeBrown #MyKidsMatter #HornsUp." The Rams beat the Raiders 52-0.

In Austin, the march on Tuesday was peaceful. Local activists seized the opportunity to "direct all the energy and frustration into a campaign people can actually get involved with," according to Lucian Villaseñor. Villaseñor, as part of the People's Task Force, has been working to draw attention to the case of Larry Jackson Jr. Jackson's sister, LaKiza, spoke at the protest, reminding attendees that a pretrial hearing for her brother's killer is scheduled for this Friday. Former APD Det. Charles Kleinert shot Jackson in the back of the neck last year after what he claims was a scuffle, and has been charged with manslaughter.

Kleinert's pretrial hearing has been pushed back numerous times, prompting the People's Task Force and other Jackson supporters to begin gathering on the evenings of the scheduled hearings. At last month's protest, there were about 40 people, a result Villasenor says is due to blockwalking and putting out flyers. Currently, the Facebook event page for Friday (Dec. 5, Travis County Courthouse, 7pm) has 335 people signed up. "All we can do is be in solidarity [with Mike Brown]. We can actually do something about Larry Jackson," explains Villaseñor.

• The District 4 City Council run-off debate Monday night between Greg Casar and Laura Pressley may carry a little more thunder than usual. Pressley, trying to make up ground lost in the first round (Casar led 39-22%) has gone negative, distributing a mailer describing her opponent as an “unemployed former lobbyist for WDP” (that is, the Workers Defense Project, a nonprofit advocating successfully for workers rights at City Hall; Casar stepped down to run). If that weren’t enough, Pressley accuses Casar of not paying property taxes (apparently indicating she doesn’t understand that renters pay property taxes through their rent). Pressley also points out that she’s married with children and grandchildren, while Casar’s both single and a “self-admitted atheist” (citing a college essay by Casar). Asked for a response to Pressley’s attack, Casar said, “I think most folks are generally shocked to see any political attack over religious beliefs. For what it's worth, I consider myself a pro-women's rights, pro-LGBT rights Catholic, but unlike my opponent I think it's inappropriate to suggest that my beliefs are a qualification for City Council. I expect District 4's voters to reject this desperate attack resoundingly.” (Love North Austin District 4 Debate, Dec. 1, 6:30-8:00pm, St John's Episcopal, 11201 Parkfield Dr.)

• Casar is also the recipient of a fairly tepid endorsement by the Statesman, which notoriously endorsed Pressley in the general election, and then retracted that endorsement, after "it became clear that Pressley’s views exceeded what was known to [the Statesman's board] at the time." The Statesman says it's endorsing Casar "despite some lingering concerns."

• City Council released the draft agenda for its last meeting before 10-1 takes over. So far, Council plans to take up rainbow crosswalks, and revisit Springdale Farm and the Decker Lake golf course proposal, among many, many other things (currently there are 182 items listed) We'll have more on the Dec. 11 meeting in our upcoming issue's Council preview.

• A new mural designed by Daniel Johnston will be unveiled Monday morning, 11am, at Nau’s Enfield Drug on West Lynn. The mural is a holiday gift to the city of Austin from advertising firm GSD&M; Mayor Lee Leffingwell will accept the gift. Also on hand will be Tom Gimbel, general manager of Austin City Limits and Daniel Johnston’s manager, and representatives of Superhero Kids, a nonprofit that supports the work of the Children’s Blood and Cancer Center at Dell Children’s Medical Center. Proceeds from the sale of T-shirts featuring the mural will go to Superhero Kids.

This story has been updated to reflect that Antonio Buehler and his lawyer Daphne Silverman told the Chronicle that Officer Adam Johnson is still named as a defendant in a lawsuit filed by Buehler, contrary to what was previously reported.