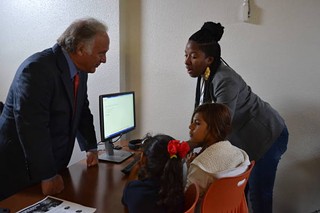 Austin is slated to take a major – and unprecedented– leap toward bridging the city’s digital divide, city and state leaders announced Thursday afternoon.

In partnership with Google Fiber, the city is offering 4,300 public housing residents living in the 18 HACA developments across Austin a chance to take part in the upcoming fiber rollout for free (or at least, a minimal cost) for the next decade. The larger Google Fiber rollout is expected to hit South and Southeast Austin starting December.

“If you lack access to the Internet, or don’t have access to a computer or tablet; or if you don’t understand the Internet’s relevance to your daily life, then you’re even farther apart and more separated from your community and its resources perhaps more than ever before,” said Gerber. “All too often that separateness has been the case for residents of public housing […] For us, the Internet is an information super highway, but for kids and families in public housing, the Internet, at times, is more like an information bike path.”

Dubbed the “Unlocking the Connection” initiative, the new program, led by non-profit Austin Pathways and supported by a dozen business, philanthropic, and academic partners, is meant to engage traditionally underserved and disconnected communities. Speakers – most personally, Georgian Manor public housing resident Rachel Martinez – drew the connection between equitable access to technology and social and economic mobility, pointing to the myriad opportunities lost when home web browsing isn’t a reality, including job searches, education and research, health care information , and civic participation. “My son uses a computer to work on his resume because if he wants a job, he has to apply online, and if you don’t have a computer it’s really hard to get a job,” said Martinez.

The effort's goal is three-pronged: Aside from the Internet connection, the program will deliver access to tech devices – Austin Community College has donated 600 pieces of computer equipment for the first year alone, said leaders. And corporate sponsors are contributing, too – the Ford and Open Society Foundations shelled out some $300,000 toward the effort (so far). Lastly – and “arguably the most important,” according to Gerber – the plan includes a digital literacy component coupled with science, technology, engineering, and mathematics (STEM) training. For instance, Google is helping subsidize training at Austin Free-Net, an Eastside non-profit dedicated to closing the digital gap.

The digital inclusion plan is said to be completely novel; never before has a city’s housing authority extended this type of service to its community. Castro, who left his post as San Antonio mayor in July, shared his hope that the trailblazing Austin plan will be used as a template for other cities.

“It’s clear that without broadband, folks are less likely to graduate high school, less likely to get high-paying, 21st century jobs – they start out at a disadvantage,” said Castro. “So what you’re doing here in Austin is a national model for what ought to happen in the United States of America for our young people.”

However there are some potential roadblocks and small caveats. First, neighborhoods (or “Fiberhoods”) must meet signup goals for the service and part of that means getting enough interested residents on board, not a guarantee – but to ensure that happens, program partners said they’re geared up to rally as many community members as possible. And while Google will build the fiber optic network infrastructure for “serviceable” HACA properties for free, as well as provide home Internet connection set-ups and service for 10 years at no cost, residents will still need to pay the $10 pre-registration fee, a possible (albeit minimal, compared to the waived $300 construction fee) barrier for the low-income Austinites being targeted. And lastly, the service is not quite equivalent to the famed 1 Gigabit per second super speed Google Fiber is now nearly synonymous with, but the not-as-fast but still speedy 5 megabits per second. (Residents can upgrade at any point – but for a price.) How much the aforementioned limitations impede the new initiative remain to be seen.

All in all, the plan is an impressive effort to increase digital inclusion and quite possibly a strategic effort on Google’s end to bypass the problems that emanated after the their first Fiber rollout, held in Kansas City, which scored the bid in 2011. Reports and surveys of the area have largely shown Google Fiber is being adopted by those that already have Internet access and very rarely by low-income and minority residents, i.e. those who stand to gain the most.

The Austin plan will be rolled out simultaneously with the larger Austin network plan over three years; the first phase begins with service to 1,423 South Austin residents. An announcement from Google Fiber on Monday (Nov. 24) is expected to answer lingering questions (a timeline, an exact service date) about the general Austin rollout, announced in April 2013. Time to Google Mark Strama
Retiring rep heads to Google Fiber, will not run for mayor