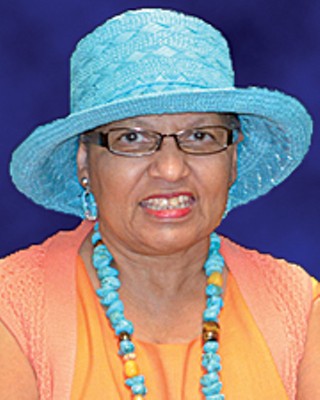 SBOE member Mavis Knight is not too pleased with the board's social studies textbooks.

While they were expected to take a preliminary vote on contentious social studies books Tuesday, State Board of Education members – amid a flurry of criticism from both academics and conservative activists – punted the decision to Friday, when a final vote is scheduled to take place.

The non-action, a surprise to most onlookers, came after hours of public testimony from roughly 20 speakers, many of whom offered a sizable dose of right-wing hysteria, including Muslim-bashing, climate change denial, allegations of Communist indoctrination, and last but not least, complaints about an unfortunate dearth of Ronald Reagan in the proposed text.

A handful of testifiers represented the coalition of academics (organized by the Texas Freedom Network Education Fund) that independently analyzed the textbooks in September and discovered several ideologically driven factual inaccuracies, including gross exaggerations of Moses’ influence on America’s founding. (Mentioning Moses, the text reads: The “biblical idea of a covenant, an ancient Jewish term meaning a special kind of agreement between the people and God, influenced the formation of colonial governments and contributed to our constitutional structure.”)

On the other end of the spectrum, members of the right-wing Truth in Texas Textbooks Coalition criticized the books for glorifying Islam and not portraying it as a violent religion. Allowed nearly an hour of the board’s time, Tea Party activist and “self-taught” expert on Islam, Roy White, bashed the books for their perceived "pro-Islam, anti-Christian bias." (White’s group has also complained the books grant too much coverage to civil rights and minorities.)

Defending the same notions as White, testifier Amy Baker saw rebuke from otherwise taciturn board member Lawrence Allen, D-Fresno, the only practicing Muslim on the SBOE, for her take on the religion, specifically the definition of “jihad." Other conservative testifiers, including retired school teacher Anthony Bruner, said “communist goals” have infiltrated the text, to which Republican board member Pat Hardy responded, Texas has the “most pro-American books of any other state.”

The debate also veered into (unsubstantiated) claims over whether Common Core standards – a target of conservative criticism for allegedly breeding liberal bias – had seeped into online materials; the standards are banned in Texas schools, under state law. Ultimately, the Republican-controlled 15-member board was reluctant to cast a vote without fully reviewing the incoming changes made by textbook publishers, who are still in the process of responding to claims of inaccuracy.

But don't expect a vote from board member Mavis Knight, D-Dallas, who said she would abstain from any vote on the social studies books due to her deep discomfort with the standards the books are based on. The standards, passed by the board during a heated May 2010 meeting, saw last-minute revisions from ideological board members. "I cannot affirm what I do not believe in," said Knight.

The books are expected to be adopted for the 2015 school year and be used for the next decade.