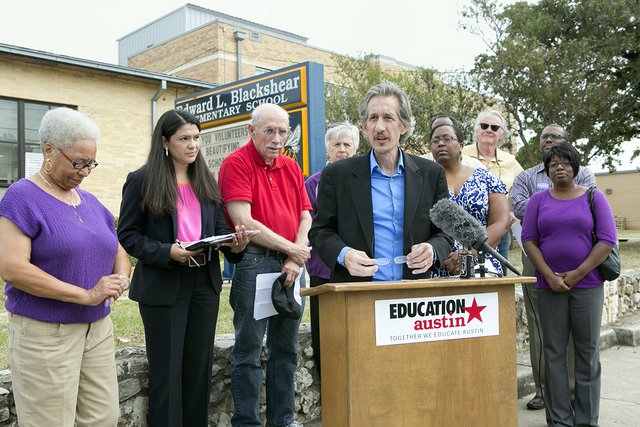 Education Austin president Ken Zarifis (at podium), along with former mayor Gus Garcia and current AISD board member Cheryl Bradley, spoke out last week against the sudden appearance of cash in the AISD District 1 trustee race from DC-based Leadership for Educational Equity (Photo by Jana Birchum)

Dark money, no whammies. It's tough to get the average Austinites to donate to Austin ISD trustee races. But the latest campaign finance reports show that two pro-education reform political action committees – one part of a Texas-based initiative, the other a DC-based tech sector money spigot – have been throwing cash around.

Austin Kids First was one of the big money players in the 2012 election, but it did them little good, with only of their candidates (District 5's Amber Elenz) taking a seat. This year, they've been spending heavy, starting with a $25,000 contribution to At-Large Place 9 hopeful Kendall Pace. She has already been pulling in some serious cash, including $12,000 from Houstonians Don and Beverly Griffith (that said, Toby Sudduth valuing his logo design as an in-kind contribution woth $10,000 seems a little steep). However, the $25,000 cash injection from AKF was her biggest single donation.

There were also perfunctory $2,500 payments to District 1 candidate Ted Gordon, and Julie Cowan in District 2, but the PAC has really doubled down on its spending for Yasmin Wagner, challenging District 7 incumbent Robert Schneider. On top of a $7,500 donation to her account, they have laid down over $33,000 in spending, most recently filing a special telegram announcing $13,112 to Kelly Graphics for a Wagner mailer.

AKF (a seeming offshoot of Dallas Kids First) is the local spearhead of the education reform movement. It has increasingly become a way for IT technocrats to play mini-Bill Gates, pushing themselves into schoolroom policy by throwing cash around. AKF is no exception: The reason it has been able to throw hundreds of thousands of dollars into races are contributors like former Dell CTO Eric Harslem ($50,000) and Silicon Labs cofounder David Welland ($50,000).

Rex Gore may not be a tech maven, having made his money as co-owner of Professional Janitorial Company and Owner of Cleanscapes, but he still dumped $30,000 into their accounts. He has started to cause ripples statewide by his contributions to Accountability First, a new PAC that, according to a Dallas Morning News analysis, has been throwing money at pro-reform Republican candidates, especially those interested in further cutting education spending.

However, AKF are not the only reform PAC dumping cash into Austin races. For some unknown reason, Leadership for Educational Equity, a DC-based has decided to throw its considerable weight behind David "D" Thompson in District 1. Pretty much every penny of the $7,000 they have spent in the last two election cycles has gone on Thompson's campaign, with no contributions or expenditures on any other candidates.

Which raises the question: Why does a DC-based PAC have a vested interest in the performance of a KIPP Austin charter founder's performance in an AISD race? And why exactly did former New York mayor Mike Bloomberg send $70,000 on Oct. 20, when the PAC had barely dented the $40,000 received in September from Silicon Valley tech venture capitalist Arthur Rock? And now the big question: How much of that remaining $121,000 war chest will they dump into an AISD trustee election before Nov. 4?