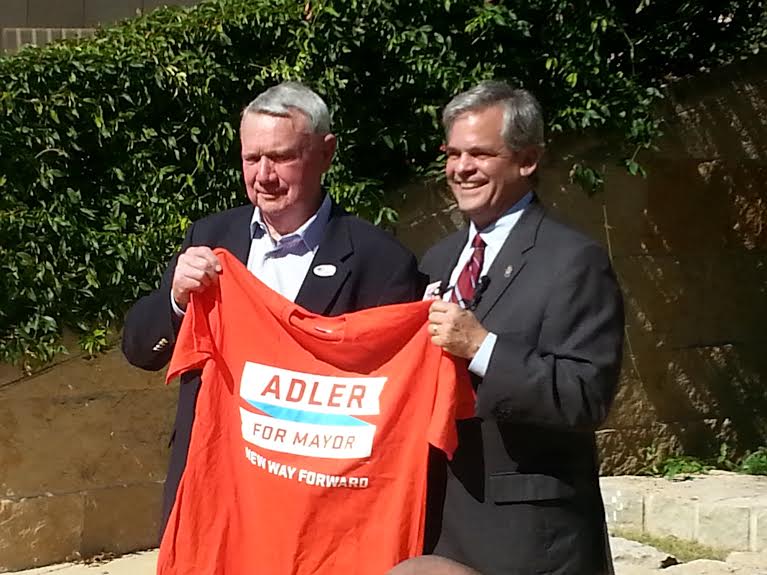 While avoiding direct criticism of the other major candidates – his Council colleagues, Mayor Pro Tem Sheryl Cole and Council Member Mike Martinez – Leffingwell said Adler has the “experience, gravitas, and demeanor” to be mayor. Leffingwell emerged from City Hall to say that he had just voted early for Adler – “There’s no one in this race that I trust more than Steve Adler” – and then addressed an additional factor that had entered into his decision. He said the recent entry into the local race of an “out-of-state Super PAC” (the South Forward PAC, based in South Carolina) to underwrite a phone campaign against Adler had “been a big motivator” in his decision to publicly support the candidate. “We don’t need Super PAC’s from South Carolina telling Austinites how to vote.” Leffingwell said he hoped that going forward, the mayoral campaign would remain “clean and focused on the issues.” Leffingwell reiterated later that he would not make any accusations against the other campaigns, but noted that the payments to South Forward apparently originated with two labor organizations (LIUNA Local 753 and the Southwest District Labor Council) that have endorsed Martinez.

Adler stood beside the mayor on the City Hall plaza, and following Leffingwell’s announcement, said he was “incredibly honored and thankful” for the mayor’s endorsement. “The mayor has served our city incredibly well; he’s been a public servant for over 10 years, over half of which as mayor.” When reporters noted that Adler's campaign has frequently attacked current officials for poor or inadequate decisions, Adler said that city “has accomplished many wonderful things during [Leffingwell’s] tenure,” but that there remain many “challenges … going forward, that will put us in an even better place. … The new 10-1 system offers us a historic opportunity to re-design how we govern.”

Adler has sharply criticized City Hall on many matters, including several initiatives very important to Leffingwell: the decision to build Water Treatment Plant No. 4, the process that created the pending transportation bond, and even the mayor’s management of Council meetings. Said Leffingwell, “I don’t agree with Steve on every single issue; that’s not the point – we have to look at the big picture, and who’s the best person to ‘lead Austin forward,’ to use his own phrase. … We may disagree on a few minor items, or even a few major items, but I think it’s pretty important that we elect a good man to be mayor.”

Later, the mayor explained, “I understand that someone who is running against someone who is tantamount to an incumbent, has to talk about a ‘new way forward’ and how they’re going to make changes. Virtually everybody does that.”

“Trust is a big issue with me,” continued the mayor. “I trust Steve Adler. I think he has the experience to do this job, and overall, that’s why I support him.”

The Cole campaign released a statement on the endorsement: "With the endorsement of Lee Leffingwell, Steve Adler’s “New Way Forward” is looking a lot like the “Same Way Forward.” Bad poll numbers have a way of convincing politicians to change course.

"Lee, of course, is entitled to endorse who ever he likes, even if it is in support of the most vocal critic of his leadership on the rail bonds. But what Steve and Lee don’t get is that the days of the Gentlemen’s Agreement in Austin are over, and with it, the ability of a handful of political insiders to direct the course of Austin’s future."

Asked afterward about Leffingwell’s endorsement, Martinez called it “not surprising,” but said he is proud of his endorsements by former mayors Will Wynn and Gus Garcia, as well as by Willie Nelson – “and we wouldn’t trade those in, any day.” As for Leffingwell’s specific complaint about the Super PAC involvement, Martinez reiterated that neither he nor his campaign have any knowledge of the South Forward PAC campaign, or “where that came from or who’s paying for it. … We are sticking to our message of fighting and working for middle-class families.” Moreover, Martinez noted that “independent expenditures” are nothing new in local races, and more specifically, that the Austin Board of Realtors, among other groups, are spending large amounts of money in favor of Adler. “How is that any different from any other organization getting involved in this race? … Independent expenditures always happen in election cycles.”

Newsdesk asked Leffingwell about the increasingly distant relationship between him and Martinez – once close political allies – and he responded with a joke about a farmer who is asked why he and his wife no longer sit as close together in their pickup truck as they once did. “‘I haven’t moved,’ the farmer said.’” Leffingwell said that he believes Martinez has changed, and while he did not want to specify specific disagreements, he concluded, “There were many, many things that led me to the decision I made” to endorse Adler.

For his part, Martinez said that “Lee has made it clear he cannot handle disagreements among political friends,” pointing in particular to their opposite positions on the $11/hour minimum wage for construction workers (which Leffingwell opposed) and the defeated proposal to move Austin Energy governance from Council to an appointed board (which Leffingwell had supported). “We’ve had policy disagreements, and policy victories that the mayor has been on the losing side, and he just can’t let it go.”

”I’m proud of my record,” concluded Martinez. “I’m proud of all the things that I’ve stood for. I congratulate Steve on his endorsement by Mayor Leffingwell. Good for them. We know that we can win this race, and we plan on doing that.”

The Road to 10-1: D7 Ballot Boxing Forum Tonight
Join the Chronicle and the eight candidates at the Alamo Village