Its defendant is billing it as “one of the most interesting and fun class C misdemeanor trials” you’ll see. Tomorrow morning downtown at Austin Municipal Court, Antonio Buehler stands in defense of his first granted indictment: a disregarded order of an officer charge he’s confident that he can beat.

Buehler, co-founder of the local cop watch assembly the Peaceful Streets Project, stands before a Municipal Court judge Thursday morning in defense of his actions on the morning of Jan. 1, 2012, a now infamous instance in which Buehler was arrested for interfering with the investigation of a possible DUI at the 7-11 convenience store on 10th Street and Lamar. According to his own account, Buehler was standing near his pickup truck when he heard a woman scream, and turned to find two officers, Patrick Oborski and Robert Snider, yanking the woman from the passenger seat of a nearby car. Buehler ditched post and rushed over, and started taking pictures.

Apparently Oborski didn’t like that. The way that Buehler tells it, the officer started to get aggressive. Things got physical; eventually enough to get Buehler arrested. Charges immediately filed included resisting arrest and harassment of a public servant (stemming from accusations from Oborski that Buehler spat in the officer’s face).

A grand jury no-billed Buehler for the two charges – as well as a few others stemming from later arrests – last April, deciding instead to indict the West Point graduate and Army veteran for disobeying multiple lawful orders. He’ll defend against the first one tomorrow, with two more scheduled in the coming weeks (Oct. 30, Nov. 6, and one as yet unscheduled). Despite reporting that a federal judge labeled each hearing as a priority, Buehler believes they’re likely to see delays. “Theoretically, they should all be tried within the next 45 days,” he says.

Thursday’s hearing promises to be an exciting one, complete with a series of handheld and surveillance videos; an animated, firmly enunciating defendant; and the possibility for a relatively rowdy viewing section. “Witnesses will finally be able to tell their story,” reports Buehler, who promises one witness in particular “who’s going to be able to really tear apart everything that the prosecution rests on.”

Should he win, Buehler will celebrate his second legal victory in the span of three months. It was in late July that he came out victorious against the Austin Police Department after U.S. magistrate Judge Mark Lane denied APD’s motions to dismiss Buehler’s civil trial, ruling a citizen’s right to record police officers in the line of duty was well established at the time of Buehler’s NYE arrest.

That case is currently set for trial in March, though its running on schedule could hinge on the fate of each upcoming misdemeanor hearing. 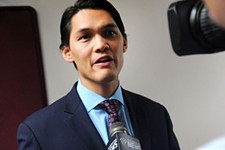