• Early voting begins today. If you're not sure where to vote, check out our complete list of polling locations here. Those concerned about lines can visit ACC-Highland Mall's early voting "megasite" featuring 4 check-in stations, 40 voting booths, and free parking.

• Over the weekend, SCOTUS upheld the Fifth Circuit's decision to allow Texas' Voter ID law to remain in effect, so voters will need to be sure to bring one (or more!) of the seven accepted forms of ID with them to the polls: 1) Texas driver's license, 2) DPS-issued Texas Personal Identification Card, 3) DPS­-issued Texas concealed handgun license, 4) U.S. military photo ID, 5) U.S. citizenship certificate with photo, 6) U.S. passport, and 7) DPS­-issued Texas Election Identification Cer­tif­i­cate (EIC). EICs are free to those who don't have any of the other six forms of ID; find more info about how to get one here. 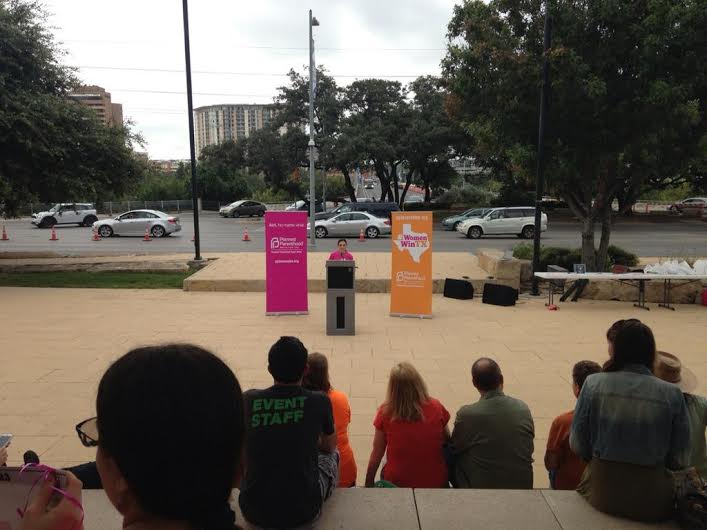 • The orange army keeps up the fight: On Saturday morning pro-choice advocates rallied at City Hall to pump up voters and celebrate the recent U.S. Supreme Court order temporarily halting House Bill 2. The event, organized by Planned Parenthood Texas Votes, featured reproductive rights leaders and allies from the Lilith Fund, NARAL Pro-Choice Texas, Whole Woman’s Health, Texas Women Vote, and Austin Leadership Advocacy Council, who reminded activists that the battle for reproductive justice isn’t over. “We know women’s health care hangs in the balance. Our rights and access to care should not be decided by a small group of extreme politicians and we shouldn’t have to hold our breath for these court rulings,” said Yvonne Gutierrez, executive director for Planned Parenthood Texas Votes. Rep. Dawnna Dukes, D-Austin, who recently made her abortion public, delivered an energetic speech that took aim at anti-choice politicians. “The right to make private medical decisions, like the one I made, should not be decided by […] your zip code,” said Dukes. Drew Stanley with Whole Woman’s Health (which previously operated a clinic in Austin, before the final part of HB 2 took effect) announced the network’s McAllen clinic has reopened since the SCOTUS ruling. Following the rally, activists took to the streets to blockwalk and mobilize voters in preparation for early voting.

• Transportation network companies are finally legal in Austin, after a series of contentious debates at City Council. Not that TNCs had been reluctant to "operate outside the regulatory framework," as the Council's draft ordinance puts it. We'll have more on the story in this week's issue.

• Embattled pot brownie baker Jacob Lavoro accepted a plea deal last Wednesday that will place him on seven years probation in Williamson County. The 19-year-old originally faced a potential life sentence for first degree possession of a controlled substance after police raided an apartment he shared with his girlfriend and found 660 grams of brownies and cookies that had been cooked with THC. The fundamental problem, of course, is that the measurement considered the brownies in full, and not just the THC amount Lavoro cooked into the flour, butter, sugar, and cocoa. Lavoro’s charges were eventually reduced to second degree (2-20 years), but he was cited for a traffic violation – and violating the terms of his pretrial release – while awaiting a ruling on a motion to suppress evidence filed in July, and spent the time between then and his acceptance of a plea deal in Williamson County jail. Terms of his probation haven’t yet been filed to the District Clerk’s office. • Holy Bat Protections: The world's largest (known) bat colony is safe for now. San Antonio's City Council agreed Thursday to pitch in $5 million toward a $20-million deal to purchase 1,500 acres in southern Comal County to protect a cave used by an estimated 50 million migratory Mexican free-tailed bats. The purchase puts the brakes on a massive proposed residential development that would have seen 3,500 homes constructed directly under the bats' nightly flight path. The Nature Conservancy and Austin-based Bat Conservation International plan to package the land with adjacent property to create and manage a 5,000-acre preserve.

• Yucca Yucca Yucca: Although the Texas Legislature and TCEQ have bent over (perhaps backwards) to expand the amount of low-level radioactive waste that can come to Texas for final burial in Far West Texas, early discussions about opening Waste Control Specialists' pit for possible high-level waste from the nation's nuclear power plants were dealt a blow Thursday. The U.S. Nuclear Regulatory Commission released a report championing a return to the long-studied and discarded Yucca Mountain, a push that could help topple Senate Majority Leader Harry Reid's (D-Nevada) long successful resistance to the project—especially if Republicans flip the Senate in November's election.

• Has Ebola arrived in Austin? A UT student is being monitored for symptoms after having flown on the same plane as health care worker Amber Joy Vinson, who was later diagnosed with the virus. Although the student wasn't in close proximity to Vinson during the flight and hasn't presented any symptoms, the student has agreed to stay at home and cooperate with Health and Human Services to monitor their condition. The city of Austin has posted FAQs about Ebola on its website.

• In the wake of the Chronicle's endorsement – "If the role of a governor is to wake and engage the whole state … then Davis is supremely qualified" – a couple of other newspapers have weighed in, in support of Wendy Davis. The Houston Chronicle called Davis "a leader with vision and foresight, one who’s willing to tackle tough issues too long ignored." And the Austin American-Statesman declared, "Davis’ positions on education, health care, and economic fairness make her the best candidate.…"

• However, Greg Abbott received an oddly reasoned endorsement from the Dallas Morning News editorial board. They claim that Abbott is the "candidate most capable of [...] holding in check growing extremism in the state GOP." We respectfully disagree that a man who's fought against marriage equality, access to health care, and the right to vote can be described as a "moderating influence."

• Last Wednesday's forum on Secure Communities included Sheriff Greg Hamilton and immigrant rights activists such as Amelia Ruiz Fischer and Alejandro Caceres. Hamilton continued to defend S-Comm, insisting that his office's compliance with ICE detainer requests is required by law. Unsurprisingly, the discussion grew heated. Read our most recent coverage of S-Comm here, and check back this afternoon for our full report on the forum.

• Local attorney David Ramos was charged last week with being part of a conspiracy to distribute cocaine and meth. The Department of Justice announced last Thursday that 34 people were in custody for their alleged roles in an "Austin-based drug distribution operation." Also charged was former lawyer Richard Patrick Fagerberg, who stopped practicing law after being injured during SXSW 2011.