Join the Chronicle and the six candidates at the Alamo Lakeline 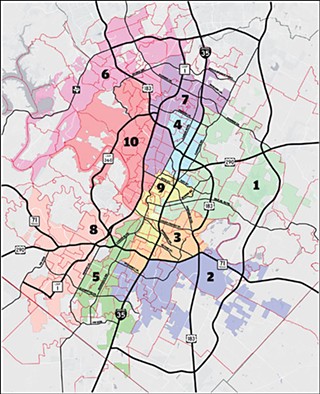 Tonight at 7pm at the Alamo Lakeline (14028 U.S. 183 N), watch the six District 6 candidates discuss the issues at the sixth media forum sponsored by the Chronicle, Austin Monitor, KUT-FM, KXAN-TV, and Univision.

The six candidates cover the political spectrum fairly well: on the right, there’s Jay Wiley, Don Zimmerman, and Mackenzie Kelly, a bit closer to the center is Pete Phillips Jr., and then Matt Stillwell and Jimmy Flannigan both stand somewhere on the center left.

District 6 was the only district to choose Romney over Obama in 2012, and is one of a few districts that could swing conservative in the election. The district is 64.4% white, and has the largest Asian population (13.3%) of any of the 10 districts. With large portions of the district recently annexed by the city, a comparatively low poverty rate and population density, a median income of $88,000, and the highest rate of population growth, D6 voters tend to be concerned about property taxes, traffic, property crime, and emergency response times.

All Ballot Boxing forums are free and open to the public.

For more on the candidates, including current endorsements, check out our candidate profiles here.

For dates and locations of our upcoming forums, check our Ballot Boxing schedule. For a comprehensive list of candidate forums citywide, click here.

Check back tomorrow at our Elections homepage for coverage of the D6 forum, as well as a link to the complete video of the forum, and look for the Oct. 3 edition of the Chronicle for more on District 6.