Ballot Boxing, the 10-1 City Council forum series co-produced by the Chronicle, KUT-FM, Univision, KXAN-TV, and the Austin Monitor, rolls into its second space tonight at 7pm with a District 2 forum at the Dove Springs Recreation Center, located at 5801 Ainez Drive. 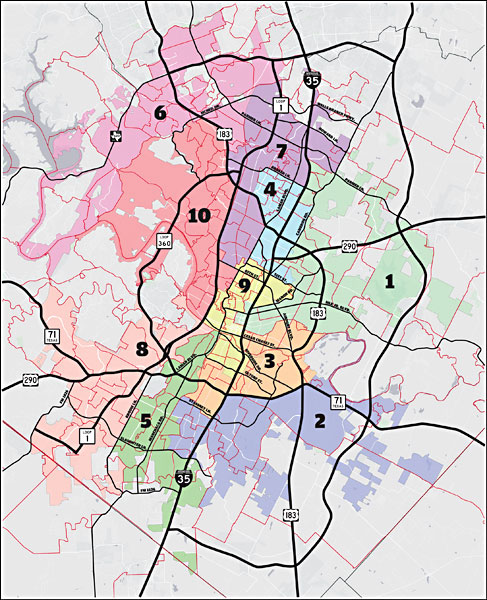 Standing in stark contrast to District 1’s lengthy list of City Council candidates, the city’s most southeastern district trots out only four options – three of whom filed for candidacy on the very last day. In fact, one candidate, local Realtor John C. Sheppard, told the Chronicle last week that he filed at 4:59pm on deadline day, Aug. 18 – one minute before doors closed – as it had appeared that Assistant State Attorney General Delia Garza (who just stepped down to focus on her run for office) would by default run uncontested.

No surprise, then, that Sheppard’s pitch for office within the majority Hispanic district (62.8%, the highest percentage of any district in the city, and one of three Hispanic opportunity districts) sounds more symbolic than systematic. The longtime Williamson Creek resident wants to provide a “point of view that hasn’t been represented” yet, and points to flood prevention and rail advocacy as two areas of interest. Thus far he carries no endorsements, and didn’t expound any specific plans to improve current flood prevention methods or rail transport. “Some folks call for ‘transparency in government,'’’ he writes on his campaign website, www.johncsheppard.org. “I think it’s pretty apparent that means another bunch of word games for insiders to make you think they care. Transparency means nothing without accountability.”

Just as critical of the current state of city government is 43-year-old Mike Owen, a Coca-Cola technician who hasn't offered any solutions but rather is using a GoFundMe.com page to argue in favor of a city “run by hard-working people and not by lawyers and politicians.” In a Friday update, he pushed for the removal of “car allowances for CapMetro executives,” a limit to firetruck usage, and better management for “how and where the money we already have is spent.”

Conversely, small business owner and Dove Springs Neighborhood Association President Edward Reyes – the third to file on the last day, although he's been a declared candidate for months – has taken the truly localized approach, promoting public safety and crime control, in addition to affordability. Like Sheppard, and Owen for that matter, he currently boasts no endorsements beyond his NA and doesn’t appear to be focused on specific issues other than the broad categories. But he's worked hard on Dove Creek response to last year's devastating flood, and is likely to be a neighborhood favorite son.

Garza has focused her campaign on transportation (better bus service), affordability (economic development), equity, and environmental protection, and has received a number of endorsements, from the Central Labor Council, Capital Tejano Democrats, Workers Defense Action Fund, Travis County Sheriff’s Law Enforcement Association PAC, Austin Firefighters Association (she's a former firefighter), and Austin Police Association PAC. She’s the only one with a shiny, functioning website and, as noted above, has spent the most time on the campaign trail.

Much can happen between now and November 4th – including tonight's forum and dozens more – but barring surprises, it would appear the District 2 race is on the verge of defaulting to Delia Garza.

Consult the Chronicle Election pages for more information on the candidates and the upcoming forums, where you can also learn how to RSVP to attend.