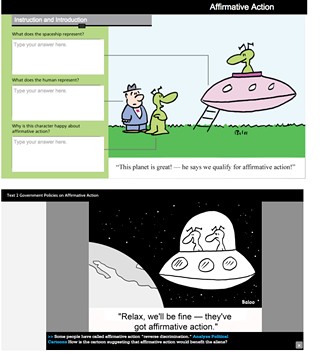 An independent review of Texas social studies textbooks reveals distortions of history on topics ranging from religion and democracy to the free enterprise system and affirmative action, according to education watchdog Texas Freedom Network.

The TFN Education Fund asked 10 scholars (including professors at Southern Methodist University and doctoral students at UT-Austin) to analyze textbooks submitted for history, government, and geography classes for middle and high school students.

The controversial standards, crafted by the largely right-wing State Board of Education in 2010, had put textbooks publishers in a tough spot – either follow the ideological TEKS curriculum standards or fail to receive approval from the SBOE for their textbooks come fall. The 11th-hour revisions to U.S. history were so extreme, they drew censure from conservative think tank the Thomas B. Fordham Institute, which slapped the board with a "D" grade and deemed the standards "unteachable hodgepodge" and a "politicized distortion of history."

“In all fairness, it’s clear that the publishers struggled with these flawed standards and still managed to do a good job in some areas,” said TFN president, Kathy Miller. “On the other hand, a number of textbook passages essentially reflect the ideological beliefs of politicians on the state board rather than sound scholarship and factual history.”

Some examples? Textbooks “greatly exaggerate” religious influences on the American founding, including a suggestion that Moses played a major role; that “the roots of democratic government” can be traced to the Old Testament; and that “the biblical idea of a covenant … contributed to our constitutional structure.” According to the reviewers, one textbook illustrates a “biased – even offensive – treatment critical of affirmative action,” including cartoons that comically suggest space aliens would meet the requirements. (See photo.)

“The SBOE and these textbooks have collaborated to make students’ knowledge of American history a casualty of the culture wars,” said Emile Lester, an associate professor in political science and international affairs at the University of Mary Washington in Virginia and reviewer of the high school American Government text.

Other gems via TFN (read them all here):

• While the textbooks largely make clear that slavery was the central cause of the Civil War, some give nods to neo-Confederate arguments – first promoted after the war – that “states’ rights” was the driving issue. Some also downplay the serious hardships faced by African-Americans during segregation.

• Some textbooks reinforce negative stereotypes of Islam as a violent religion spread exclusively by conquest. One tells students, inaccurately, that “the spread of international terrorism is an outgrowth of Islamic fundamentalism,” ignoring the numerous examples of terrorism not related to Islam at all.

• Most textbooks offer scant coverage of the movement for LGBT equality, one of the salient civil rights struggles of the last half-century. One publisher links the gay rights movement of the late Sixties to society “spinning out of control.”

In July, the group slammed the SBOE for opting to nominate several unqualified panelists to a social studies textbook review committee (which included folks like Mark Keough, a GOP candidate for House District 15, pastor, and former car salesman) in lieu of degreed historians and other academic scholars, Newsdesk previously reported. Of the 140 people appointed to the panels overseeing geography, history, and economics, only three were faculty members at Texas colleges or universities – a "shockingly" low figure, according to TFN. So they took it upon themselves to organize an independent review panel (unaffiliated with the SBOE and the Texas Education Agency) to critically analyze the textbooks.

The SBOE is set to vote on which textbooks to approve in November. The books, to be adopted for school districts in the fall of 2015, would be used in Texas classrooms for the next decade.

Dissecting Mercer's Anti-Evolution Editorial
Because shooting fish in a barrel is fun!