Attorney general pulls a Perry, will no-show after RSVPing 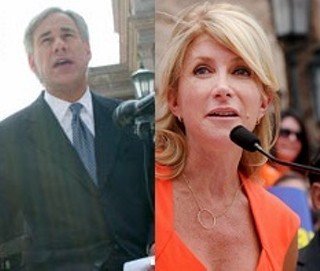 In 2010, Gov. Rick Perry declined to face his opponents in a televised debate for the governor's race. In 2014, Attorney General Greg Abbott has seemingly gone one step further: After agreeing to face Sen. Wendy Davis, D-Ft. Worth, in a round table on Sept. 30 on Dallas station WFAA, Abbott has now pulled out.

According to the ABC affiliate, Abbott's communications director Robert Black (formerly Perry's press guy), the attorney general had to withdraw "due to our inability to agree on specific details of the format."

WFAA general manager and president Mike Devlin said he was "deeply disappointed that the Abbott campaign has not lived up to the commitment it made." Defending the proposed format, he added, "WFAA has produced numerous debates which are balanced and fair to all the candidates. This debate would be no different. The citizens of Texas deserve to hear from the candidates for the most important office in the state."

This is actually the second debate on which Abbott has pulled the plug. He originally proposed two, which Davis accepted, even though she proposed a total of six. However, back in July, Abbott very quietly nixed the idea of a debate in the Rio Grande Valley: Per event sponsors the McAllen Monitor, he refused to let there be a studio audience. UPDATE: according to the Monitor, the debate is still on, as Davis' campaign and the media partner has folded to Abbott's demands.

In a statement, Davis called his latest exit "nothing short of an insult to the voters of Texas." She said, "It's no surprise that Greg Abbott is pulling out of a long planned debate the day after he was defeated in court for protecting billions in public education cuts that have led to overcrowded classrooms, teacher layoffs, and shuttered schools."

UPDATE: More responses have come in about Abbott's withdrawal. In a quick phone conversation with House Appropriations Committee Member Dawnna Dukes, D-Austin, about yesterday's school finance ruling, she voiced astonishment that Abbott was not prepared to appear in public. "How can you be a former justice and an attorney general, and not be a debater?"

Texas Democratic Party Executive Director Will Hailer was much more direct: "Attorney General Greg Abbott is a coward. Backing out of a debate shows his campaign isn’t ready for prime time. He and his team have a fundamental disrespect for Texans and he is unwilling to have his ideas questioned by the press and everyday voters."

Progress Texas simply rolled its eyes at Abbott's volte face, and reposted the link to an article its staff wrote yesterday, asking, "Is Greg Abbott the Invisible Man?"