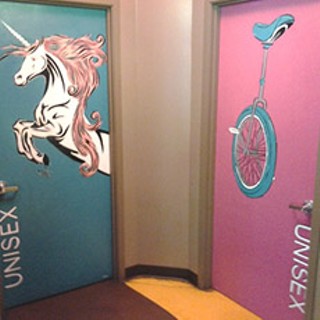 An example of gender-neutral signs (by Office of Human Rights, D.C.)

Tomorrow, Thursday, August 28, Austin could become the first city in Texas to pass a resolution (Item 84) requiring single-stall public restrooms to be gender-neutral.

Sponsored by Council Member Chris Riley and co-sponsored by CM Bill Spelman and Mayor Pro Tem Sheryl Cole, the draft resolution directs the city manager to “process any necessary code amendments to require gender-neutral signage for single-occupancy restrooms, to create an implementation plan, and to report back to Council by September 25, 2014.”

The Human Rights Campaign, a national LGBT civil rights organization, has led the call for gender-neutral restroom requirements across the country. Members of the transgender community may face harassment and even violence when using gender-segregated restrooms, when suspicious onlookers decide they’ve entered the “wrong” restroom. According to a statement from Riley’s office, “Austin has demonstrated leadership on LGBTQ issues, and gender-free restrooms are one more way that we can lead. This change will make our city safer and more inclusive, which is better for all Austinites.”

It’s not only transgender people who stand to benefit from the change. People who are disabled and rely on the help of family members or attendants of the opposite sex, and parents with children of the opposite sex won’t have to worry about which restroom is the more appropriate to use. Lindsay Marsh, a local mother with a young son, said that she supports the law because her son will soon be out of diapers, and she wants to be able to take him to the restroom without having to think about it. Anyone who’s ever stood in a long line to use a public restroom will likely also appreciate the switch.

Not everyone is happy about the idea, however. On his Jay Wiley for Austin City Council Facebook page, the District 6 candidate posted a link to a story entitled “Austin: Unisex bathroom ordinance proposed (idiot alert)” with the comment “Is it November yet??” When asked to clarify his stance on the resolution, Wiley wrote, “If Council spent half as much time worrying about our local tax burden as they do about advancing another item on their liberal checklist, we wouldn't have the affordability problem we have in Austin. The new City Council can't get in there fast enough.” Others have expressed fears about sharing a bathroom with someone of the opposite sex. Since the rule would only apply to single-stall restrooms, which are designed to be used by one person at a time, those fears may stem from a misunderstanding of the proposal.

Some local businesses already offer gender-neutral restrooms. Epoch Coffee has two gender-neutral single-stall restrooms at its North Loop location, and an employee there said they’d experienced no problems with them.

While Austin would be the first city in Texas to pass such a resolution, other U.S. cities have started to make the switch. Washington, D.C., recently began enforcing its 2006 regulation that prohibits gender-specific labeling for single-sex restrooms. The #SafeBathroomsDC campaign seeks to educate and gently shame noncompliant businesses by asking people to tweet the “name of the business, its location, and ideally a photo of the bathroom door using the hashtag #safebathroomsDC.” When asked about the D.C. law, Louraca, an employee of the DC Center, responded enthusiastically. She reported that it had been “very successful,” and that, as a transgender woman, she noticed a positive change firsthand. Before the law, busybodies had wanted to start trouble “about nothing," she said. "It gives people a lot more space."