HB 2 Trial Comes to a Close

Both sides give closing arguments in case against Texas' abortion law 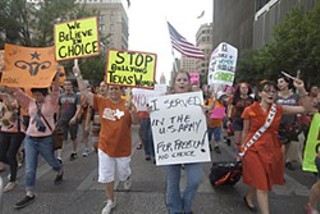 Protesters during the House Bill 2 legislative debate. (by Jana Birchum)

Plaintiffs suing the state to block implementation of parts of the law reiterated that the legislation poses an “undue burden” on abortion-seeking women, by requiring them to travel long distances for care, and imposing medically unnecessary facility standards. Also, they argued, it will cause a “public health catastrophe” by eliminating abortion access in most parts of the state. Speaking for the state of Texas, defendants’ counsel responded that the law will not impose a substantial burden on women.

Abortion providers have sought to block a requirement that forces abortion clinics to comply with the same standards as ambulatory surgical centers. The regulation is expected to bring the number of abortion centers in the state to less than 10 and leave no abortion services west or south of San Antonio The lawsuit also challenges HB 2’s provision that mandates physicians obtain admitting privileges at a hospital within 30 miles of where the abortion is performed, specifically for two clinics forced to close because of this rule – the Whole Woman's Health clinic of McAllen and Reproductive Services of El Paso.

Stefanie Toti, representing the Center for Reproductive Rights, said the requirements imposed by the ambulatory surgical center rules single out abortion providers, as three-fourths of other ASCs in the state are exempt from the costly building code requirements – effectively amounting to a multi-million dollar tax on abortion providers.

The state provided no medical evidence to show the law is necessary or promotes the health and safety of women, said Toti. As few as seven abortion clinics would survive the law, creating a “substantial obstacle” for women who do not live in one of the five metro areas (Austin, Houston, Forth Worth, Dallas and San Antonio) where remaining providers exist. These women would need to travel 150 to up to 500 miles for abortion care.

“Would we allow that to stand for someone receiving an appendectomy or a sprained ankle? I have a problem believing it’s okay to send someone 150 miles away for care when they could get it closer,” commented Judge Lee Yeakel, perhaps offering a glimpse of his upcoming ruling. “I don’t think we would let this stand for any other minor medical procedure.”

In her concluding remarks, Toti said the state is trying to do indirectly what it cannot do directly since Roe v. Wade– eliminate abortion service from huge regions of the state.

State Solicitor General Jonathan Mitchell relied heavily on the previous ruling by the 5th Circuit Court of Appeals, which had found in favor of HB 2. While the definition of undue burden to women is not necessarily clear, the impact of the law would not “come close” to even a minimal standard of burden, said Mitchell, as 83% of Texas women will live within 150 miles of an abortion clinics. Plaintiffs failed to show that any patient would not be able to obtain abortion services as result of HB 2, said Mitchell.

The state also sought to defend as common practice anti-abortion advocate Vincent Rue’s paid consultant work for the Attorney General – including extensive editing and drafting of defendant testimony. But Judge Yeakel slammed the AG’s office, saying the “state effectively tried to hide Rue’s involvement,” and he described the evidence as “very disturbing” in the eyes of the court.

Yeakel is expected to issue a ruling in writing before Sept. 1, when the ASC requirement of HB 2 is set to take effect. Yeakel previously ruled the admitting privileges requirement as unconstitutional and "without a rationale basis." However, whatever the case, either side will likely appeal.