AIRC, S-Comm, and the Fight for Immigrants' Rights 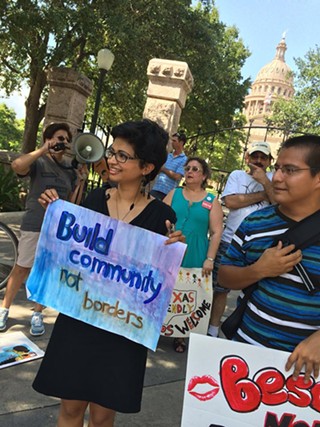 Today at 3:20pm, the Travis County Sheriff’s Office will present its FY2015 budget requests to the Commissioners Court. Supporters of immigrants’ rights will be there as well, demanding that Commissioners withhold funding from the TCSO until Sheriff Greg Hamilton agrees to terminate the office’s involvement in Secure Communities, or S-Comm.

The controversial federal program allows U.S. Immigration and Customs Enforcement to request that local law enforcement issue a 48-hour “detainer” for any undocumented person arrested, regardless of the offense. ICE uses the time to decide whether to “seek removal,” i.e., deportation. While the program has been abandoned by jurisdictions across the country after a handful of federal court decisions called into question the constitutionality of detainment without probable cause, Sheriff Hamilton has continued to defend Travis County’s participation.

At every step of the way, the local immigrant community has responded, investigating and bearing witness to S-Comm’s effects. A variety of groups work together to advance the cause of immigrants’ rights. One such organization, Austin Immigrant Rights Coalition, was founded in 2006 during the countrywide outcry over the Sensenbrenner Bill, which would have made simply being an undocumented immigrant a felony subject to imprisonment and deportation, and would have criminalized aid given to an undocumented person. AIRC is an immigrant-led organization – nearly all of its members are immigrants, many of them undocumented. “We’re fully empowered to help out our own community,” says Executive Director Alejandro Caceres. He is director in name only: The group uses a “consensus-based, horizontal way of organizing.”

Although the coalition was formed in response to Congress’ failure to enact meaningful immigration reform, at some point the group decided to focus on other campaigns that might have a more immediate impact on Austinites’ lives. Having heard stories in the community of people being deported after arrests for minor infractions, AIRC turned its attention to S-Comm. Not only have advocates drawn widespread attention to S-Comm’s flaws, they also convinced City Council to pass a resolution opposing it.

However, ending S-Comm in Travis County hasn’t been the sole focus of Austin immigrants’ rights activists. Lately, they’ve been at the forefront of several issues, advocating for Central American refugees; speaking out against the practice of housing families, including children, in for-profit detention centers while they await deportation proceedings; and pushing back against anti-immigrant politics and misconceptions.

Recently, AIRC has been fundraising for refugees at risk for being deported. The group collected donations of clothing and other items at Cristo Rey Catholic Church, and raised nearly $8,000 in two weeks. Once again, much of the effort was led by immigrants: AIRC member Antolin Aguirre donated 100% of the profits from his food truck, El Rey de Antojos, on two separate days. The money will go to a legal defense fund for refugee children, many of whom have no legal representation at their deportation hearings. Instead – even though most don’t speak English, and some speak no Spanish – they’re expected, in essence, to represent themselves, says Caceres.

The past week saw immigrants’ rights supporters at the Capitol on Thursday, countering a rather anemic anti-immigrant demonstration with songs and handmade signs; at Cristo Rey on Friday, sorting through a roomful of donations; and in Hutto on Saturday, protesting the return of family detention. Additionally, last Thursday City Council once again showed its support for the immigrant community by passing a resolution directing the City Manager to explore the feasibility of a municipal ID card, which would allow undocumented immigrants to access services – such as “housing, health care, education, and banking” – that require a government-issued ID.

Regardless of what the Commissioners or the sheriff decides today, one thing is certain: Supporters of immigrants’ rights will continue to press forward, making sure their voices are heard.

To learn more about AIRC, or to make a donation to help the refugee children, visit www.airc.org.