Battle of the Bullhorns

Anti-immigrant 'convoy' dwindles into Texas to a very mixed reception 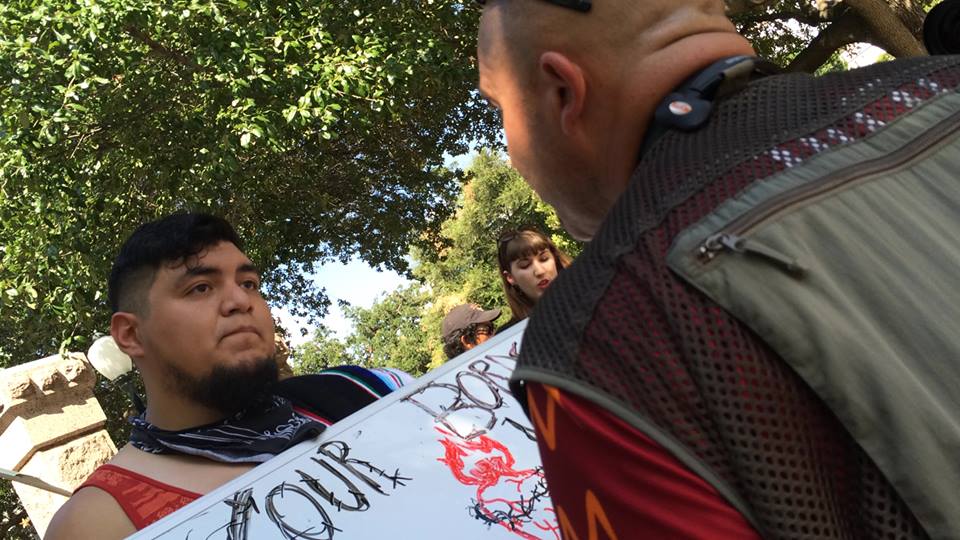 Santilli gets up close and personal. (Photo by Peaceful Streets Project)

Earlier this summer, Murrieta, Calif., gained notoriety after protests caused three buses carrying immigrant mothers and children to turn and leave, officials deciding it would be safer to send the immigrants to a different, more welcoming town.

Galvanized by that brief victory, a couple of far right media networks, Liberty News and Guerilla Media, organized the Murrieta Border Convoy. Traveling from Murrieta to McAllen, Texas, this week, the group is “bringing the spirit of Murrieta with us, [and] encourag[ing] communities to rise up and take a stand against unconstitutional federal incursions.” While the convoy has received a warm reception from some towns, it’s faced strong pushback since crossing the Texas border on Sunday. 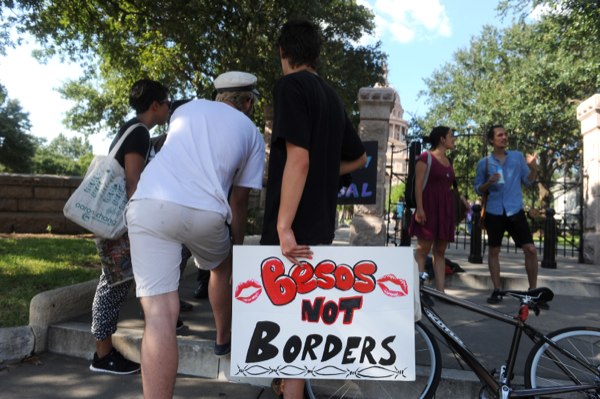 After hearing of the convoy’s plans to visit Austin on Thursday, local immigrants’ rights activists, including Alejandro Caceres and Christopher Ledesma, invited supporters to join them at the Capitol to demonstrate solidarity with undocumented residents and refugees. With the sounds of Stop Patriarchy in the background, a motley, cheerful crew bearing handmade signs began gathering in front of the south gates of the Capitol at 3pm, deliberately picking a time and place that wouldn’t directly coincide with the convoy’s planned protest at the governor’s mansion. (Rick Perry truly can’t win: The hard right doesn’t think he’s any better at dealing with border security than the left does.)

What the pro-immigrant organizers didn’t anticipate was how much the convoy’s numbers had dwindled during their travels. A single-digit coterie, desultorily puffing on vapes and wearing varying amounts of camouflage, congregated on the Capitol’s south lawn a little before 4pm. Realizing, perhaps, that a confrontation with a multiethnic group singing songs in English and Spanish would make better theatre than yelling impotently at Perry’s house, the antis quickly relocated to the same spot as the pros. Before you could say “send them back,” things got heated. Most likely sensing the presence of TV cameras within 50 yards, Stop Patriarchy crossed 11th Street in order to join the fray. For awhile, it was a shouting match that kept threatening to turn ugly, but, fortunately, never did.

The convoy was bolstered by some locals who agree with their basic message: There is no room for the refugees who flee their countries for the U.S. Beverly Lillian, an Austinite, said that she was out with the convoy because she was concerned that undocumented immigrants would “end up dragging us down,” since, according to her, they’d already ruined their own countries. Pete Santilli, Guerilla Media Network radio host and the clear star of the convoy, said that he’d traveled to Austin to decry Perry’s inability to secure the border: “He wants to run the country and he can’t even run his own state.” Santilli spoke of children carrying exotic diseases, violent criminals, and drug-smuggling coyotes, opportunists who prey on the desperate.

Santilli knows something about opportunism. There’s no doubt that some people are genuine in their opposition to the Central American refugees, but it’s unlikely Santilli’s one of them. A fear-mongering shock jock to put even Alex Jones to shame, Santilli made national headlines in 2013 after he declared on his show that Hillary Clinton “needs to be tried, convicted, and shot in the vagina. I want to pull the trigger.” Available for sale on his website is a “textbook” entitled Where Did the Towers Go? The border scare is just the latest cause of the paranoid fringe he’s hijacked for publicity.

However, while the convoy moves on to McAllen, Austinites continue to advocate for compassion toward “kids who have risked their lives traveling hundreds of miles,” as Norma, one of the organizers of the counterprotest, put it. “These kids are the future of this country,” she said. Ledesma said he wanted to change the terms of the discussion. “We need to ignore the voices that have driven the debate to such absurd territory,” he argued. “Texas communities are the ones that have dealt with [immigrants] the most. We’ll integrate them into our communities, because that’s what we’ve done for decades.” 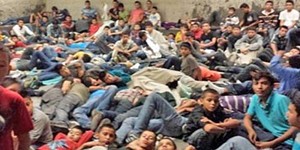