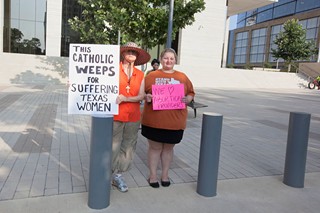 Pro-choice protesters gathered outside the courtroom on the first day of the HB 2 trial. (by Photo by Jana Birchum)

Among the state defense witnesses who took the stand on the third day of trial against Texas’ abortion-restricting House Bill 2 were two women with overt objections to abortion and one physician whose testimony in support of abortion regulations was recently discredited by a federal court.

After two days of plaintiff testimony in U.S. Judge Lee Yeakel’s courtroom, it was the state’s turn to offer its witnesses. On Wednesday afternoon, Dr. Mayra Jimenez Thompson, a Dallas-based OB-GYN testified, and it was clear from the outset that Thompson was anti-choice; she said had not performed an abortion in 20 years because of her “religious” beliefs. In cross-examination, plaintiffs repeatedly asked Thompson if the Attorney General’s office and specifically, Dr. Vincent Rue, a representative of the office, had provided guidance or advice in her expert testimony report.

Initially, Thompson steadfastly denied any involvement from the OAG, saying she alone had drafted the document. However, in hopes of “refreshing her recollection,” plaintiffs produced several damning e-mail exchanges between her and Rue indicating constant assistance in drafting and modifying versions of the report. (Correspondence from Rue included: “I’m still drafting, will keep you posted”; “Tried to use as much of your material as I could, but time ran out”; “Just want you to review, I’ll keep working on the draft.”) Thompson defended the assistance, saying she was a medical doctor, not trained in legalese and the proper “wordage” of court testimony.

Rue isn’t just lending a hand to the Texas case; he’s a behind-the-scenes fixer for other states that are imposing anti-abortion laws, including Alabama and Wisconsin. Rue coined the term “post-abortion stress syndrome” – an alleged disorder thoroughly discredited by major medical groups, including the American Psychological Association, yet still endorsed by anti-choice activists. Rue’s testimony in previous cases, including the landmark Planned Parenthood v Casey, was rejected for lack of credibility. It’s reported that for his services in other states, Rue has received nearly $50,000.

While Thompson answered “no” when asked if she had financial/ownership interests in ambulatory surgical centers, plaintiffs recounted her deposition testimony, which showed Thompson is affiliated with the North Central Surgical Center in Dallas. Thompson countered the center was no longer an ASC and had become a full-fledged hospital in recent years. Thompson also admitted to failing to review eight of the nine studies on abortion mortality rates provided by plaintiffs before giving testimony.

Similarly, the next witness, Dr. James Anderson, an emergency room and family practice physician, also received aid from Rue, or as he phrased it, “wordsmithing.” In fact, Anderson holds a prior professional relationship with Rue, assisting him with reproductive rights and anti-abortion legislation in other state cases since 1997, including some concerning parental consent laws.

When questioned about Rue’s influence on his testimony, Anderson downplayed the degree of involvement, saying the legal draft was a “team effort” and “a collaboration.” Anderson said Rue provided sources for his testimony, including material from the Susan B. Anthony List, a national anti-choice group. When asked about the group’s ideological motivations, Anderson conceded the source “risks bias, but still validates the need for the law.” Plaintiffs pointed out that just this week a federal district judge in Alabama discredited the majority of Anderson’s testimony in support of anti-abortion legislation in a suit filed by Planned Parenthood “due to concerns about his judgment or honesty.”

The witnesses provided by the state grew even weaker as the day wore on.

Next in line was 28-year-old Ashton Jimenez, who says she supports HB 2 as a result of her personal experience undergoing abortion. While plaintiffs sought to object to the testimony as irrelevant, Jimenez was allowed to retell her story of suffering bleeding and pain in her Baylor University dorm room after ingesting abortion-inducing drugs some 10 years ago. The incident led her to testify before the Texas Legislature in support of abortion clinic regulation and be a defendant witness today. However, Jimenez said she did not know if the Waco Planned Parenthood, where she received the drugs, was an ASC or if it had hospital admitting privileges at the time. She also wasn’t clear about the details of either regulation or the difference between an ASC and an abortion clinic.

But Jimenez isn’t simply a young woman with a personal story the AG’s office stumbled upon. During her deposition, Joe Pojman and Terry Williams, members of Texas Alliance for Life, an influential anti-abortion state lobbying organization, accompanied Jimenez, and it was Williams who recommended her to the OAG as a witness. Jimenez is also a minor public figure – she received compensation for speaking at the anti-choice Texans Rally For Life event at the Capitol (attended by Attorney General Greg Abbott and legislators who support HB 2). As plaintiffs noted, Jimenez is also a counselor with anti-abortion crisis pregnancy center CareNet. And in her deposition, Jimenez expressed her support for HB 2 because it makes abortion less accessible.

The final witness, Todd Giberson, a geographer who conducted research about the number of reproductive age women living 150 miles from a clinic, did not take into account women who would be unable to secure access to a car (such as poor women along the U.S.-Mexico border), and included a facility in New Mexico as a clinic within reach for those residing in El Paso.

Abortion providers aim to block a requirement that forces abortion clinics to comply with the same standards as ambulatory surgical centers. The costly regulation, set to take effect Sept.1, is expected to bring the number of abortion centers in the state to less than 10. The lawsuit also challenges HB 2’s provision that mandates physicians obtain admitting privileges at a hospital within 30 miles of where the abortion is performed, specifically for two clinics forced to close because of this rule – the Whole Woman's Health clinic of McAllen and Reproductive Services of El Paso.

The trial resumes Thursday at 9am and is expected to wrap up by the end of the day.

For coverage of the first two days of trial, read here.