Safety Forum Gets a Little Drinky

The ‘expert’ response to every safety problem: Don’t drive drunk 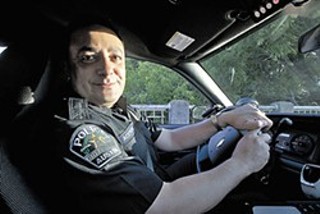 The event was billed as “The 2014 Austin Traffic Safety Symposium” (Aug. 5, Palmer Events Center), but that turned out to be a misnomer. The focus was mainly on drunk driving – anyone who’d come in hopes of a spirited discussion about, say, congestion on I-35 or City Council's proposed “distracted driving” ordinance would have been disappointed.

Acevedo quoted the stats on drunk driving repeatedly: There were 6,404 DWI arrests in Austin last year, and 41 fatalities resulting from drunk driving. Over the course of the evening, a divide emerged between law enforcement – who say they’re doing all they can with the resources available to them, and would like it very much if Austin as a whole decided to be less tolerant of drunk driving – and those citizens who believe that more infrastructure, legislation, and practices must support alternatives to driving and to encourage safer driving.

The first speaker, John Woodley, expressed concerns about the city’s accommodations for those with disabilities. He described being unable to safely cross the street after disembarking from a bus stopped at mid-block, and bus routes with stops in the street, instead of at a curb, making it difficult or impossible for people in wheelchairs to use those stops. In response, Watson said that the city has been adding hybrid beacon crossings (crosswalks with pedestrian-activated flashing lights) and is working toward making 98% of Cap Metro’s stops ADA-compliant by the end of 2015. The exchange set the tone for the evening: Watson was sympathetic toward Woodley, but outlined solutions already underway, and didn’t appear motivated by his testimony to do anything differently.

The sense that there might be more talking at rather than with intensified after Sara LeVine made her statement. LeVine, the founder of ATX Safer Streets, delivered the evening’s highest ratio of actual information to total word count. Her argument was that not all drunk drivers want to drive drunk, but that some do so because they’re not sure of other options. She pointed out that Austin has a large hospitality and entertainment economy, yet doesn’t have many alternatives to driving. For example, the 4th of July celebration held at Circuit of the Americas wasn’t accessible by public transportation, yet alcohol was served. ATX Safer Streets’ proposals include more public transportation, such as more rail and later running hours; the legalization of Transportation Network Companies; and more overnight parking.

Spillar responded to LeVine by framing the issue as one of “personal responsibility,” and urging people to make a plan before leaving their homes. (Of course, one plan could very well be not to get drunk – but, as we all know, plans change.) The debate was curiously evocative of another public controversy: abstinence versus contraception. It’s understandable that Spillar would feel some frustration that a drunk driver would justify his decision based on fear of a parking ticket, especially when, as he noted, those tickets will be excused for those who got them because they chose not to drive drunk. However, LeVine’s point was that – while her group advocates personal responsibility and publicizes and promotes the existing options people have – there need to be more and better alternatives to driving in order to convince a certain segment of the population that drunk driving isn’t worth it.

The TABC’s Chief of Enforcement, Robert Saenz, discussed at length the challenges businesses face in complying with dram shop laws. He said that many bars can lower their risk of overserving customers by implementing the following rules: 1) don’t announce last call, because it encourages greater drinking just as people are leaving; 2) enforce the rule of not selling more than two drinks to any one person; 3) don’t sell shots or drinks larger than 12 oz after midnight or 1am; 4) increase the number of servers (as he put it, “waitresses”), in order to allow servers and bartenders to be better able to pay attention to customers’ intoxication levels; and 5) hire “secret shoppers” who can look for drunks and text management if they see someone who looks like they’ve been overserved or on the verge. Saenz said that he’s seen real improvement from bars practicing these policies.

At the end of the evening, the discussion briefly turned to cyclists, who naturally want stronger penalties for people who hit, injure, and kill them. Bastidas took exception to the idea that a person who wasn’t intoxicated shouldn’t be punished for hitting a cyclist, and questioned the use term “accident” to describe such an event. He mentioned John Fusselman, Escamilla’s colleague who was hit and killed by a sober driver – Bastidas claimed he had been illegally driving on the shoulder at the time. Considering that the number of cyclists killed in 2013 was not insignificant, Bastidas may have a point.

Nevertheless, it seemed unclear if many on the panel would walk away from the symposium with a fresh perspective. There was a consensus among law enforcement, Escamilla included, that 1) it’s hard enough to get a conviction for a drunk driver, and 2) there’s no law on the books to punish a sober driver for hitting someone, even killing them – if the driver hadn’t blatantly violated a traffic law. Escamilla also touched on the difficulty of determining nonalcoholic impairment, claiming that requiring someone who wasn’t visibly impaired to take a blood test would be unconstitutional, because there must be probable cause for what is technically considered a search. This prompted Acevedo to mention that he is a “drug recognition expert” and hopes to train more of his officers to recognize signs of drug use, such as dilated pupils.

The most amusing comment of the evening came from Richard Schiller, who offered the suggestion that the city institute a campaign encouraging people to “live where you work” – because, of course, most Austin-area residents have a plethora of affordable, convenient housing options, but choose a long commute for whatever reason. However, Schiller does own Comedy Defensive Driving, so maybe he was trying to be funny.