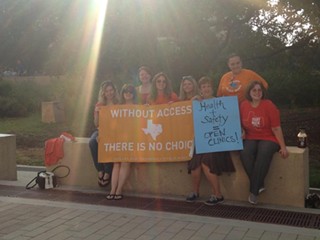 In Day 2 of the trial to combat provisions of Texas’ abortion-restrictive House Bill 2, a local reproductive health provider recounted the increased instances of state regulator visits following her involvement with the first lawsuit against HB 2, filed in 2013.

Amy Hagstrom Miller, founder and CEO of Whole Woman’s Health, a named plaintiff in the initial lawsuit filed by abortion providers (as well as the current one) said on the stand Tuesday that before her network of health clinics filed suit last year clinic deficiencies reported by the state were rare. However, following the suit, the clinics were on the other end of a “very significant” change in tone from the Department of State Health Services, which began to aggressively pay them visits. At one point, Miller recalled, a state regulator refused to leave the premises, even as the staff was caring for patients, until they copied 50 charts. Miller said that after her legal complaint to the state, the relationship with DSHS felt “adversarial," and she and her staff grew “uncomfortable.”

Miller also detailed the difficulty of leasing and purchasing ambulatory surgical centers (ASCs) due to high cost and uncooperative financiers. Those who had previously provided financial assistance (even her own business partner), said Miller, declined more support, because the restrictions of HB2 are seen as too onerous to feasibly comply. Rejected by 15 banks, Miller said that her long-time network of providers could not finance the lease or construction of an ASC, other than the existing center in San Antonio (built well before HB2).

Complications were not only limited to financial access – efforts to lease a space in Austin, close to Seton Medical Center, failed due to a clause in the lease contract barring abortions from being performed on the site. Miller’s Austin abortion and preventative health center closed its doors last week after more than a decade in service.

The court also heard from Marilyn Eldridge, president of the now shuttered Reproductive Services of El Paso, who discussed the uphill battle when seeking to secure admitting privileges for the licensed physician on staff. The center opened in 1973, after the U.S. Supreme Court’s Roe v Wade decision. After more than four decades serving women, the center was forced to close as a result of HB 2’s hospital admitting privileges requirement, which forces doctors to secure admittance to a hospital within 30 miles of where the abortion is performed.

Abortion providers, supported by the testimony from a string of expert witnesses, detailed the heath and safety risks the law would pose to Texas women, while the state argued the legislation is intended to increase the level of care and patient oversight.

Abortion providers aim to block a requirement that forces abortion clinics to comply with the same standards as ambulatory surgical centers (ASCs). The costly regulation, set to take effect Sept.1, is expected to shutter at least 14 clinics, bringing the total number of remaining abortion care centers in the state to less than 10. The lawsuit also challenges HB 2’s provision that mandates physicians obtain admitting-privileges at a hospital within 30 miles of where the abortion is performed, specifically for two clinics forced to close because of this rule – the Whole Woman's Health clinic of McAl­len and Reproductive Services of El Paso.

Only 22% of abortion care centers are able to comply with the ASC standard rule and the rest cannot meet the requirements due to exorbitant costs, said attorneys representing abortion providers. For instance, clinics would need to pay up to an estimated $3 million in construction fees to comply and $600,000-$1 million in annual operating costs for facility changes, a building architect testified. They include widening hallways, humidity control, janitor closets, parking spaces and doorway sizes – regulations considered by health professionals as wholly medically unnecessary.

The effects are already taking shape, witnesses explained: Dr. Lendol Davis of the Women’s Health Center in Killeen said his facility, which served several military members, was forced to close because it could not meet the expensive ASC requirement.

“These costs are not only enormous, but they provide no benefit to women seeking abortion services in Texas,” said Jan Soifer, attorney representing reproductive health providers.

Soifer and colleagues contend HB 2 will drastically reduce the number of abortion clinics in the state and lead to greater costs, travel time and distance for patients. Abortion care is expected to be limited to San Antonio, Dallas, Fort Worth, Austin, and Houston after September. To date, abortion providers no longer exist in the Rio Grande Valley; there remains one clinic in West Texas, however, that is expected to shutter when the ASC rule takes final effect.

More than 891,000 women would live farther than 150 miles from an abortion clinic if the law does take effect, health leaders argued. This, in turn, will likely lead to an increase in abortion procedure delays – which heightens risk and complications for women – including unplanned births, possible self-induction, and use of “black market” abortion pharmaceutical drugs.

Testifying physicians pointed to difficulty obtaining admitting privileges. Dr. Sherwood Lynn, who formerly served as an abortion provider at the recently closed Whole Woman’s Health in Austin, currently serves as the medical director for Whole Woman’s ASC in San Antonio and applied for privileges at seven different hospitals in the Rio Grande Valley, in order to work at the then-open McAllen center. With more than 35 years in practice, Lynn said he was rejected for reasons not based on his clinical competency – rather, due to potential stigma. Three supporting physicians, said Lynn, denied his application out of “fear of retribution.”

Health leaders and plaintiffs argue the hospital-privileges rule isn’t needed, as instances of complication are rare and seldom require hospitalization. (For example, in the past ten years, only two patients out of the 14,000 served at the McAllen abortion clinic required transfer from the clinic to a hospital.) The American Medical Association, the American College of Obstetricians and Gynecologists, the American College of Surgeons, and other major health groups agree that privileges aren’t necessary for outpatient procedures.

All the while, the attorney general’s office maintained the law reduces the likelihood of complication and improves patient care. They fell back on the conservative 5th Circuit Court of Appeals decision (which upheld the law after abortion providers first sued the state), minimizing undue burden on women, even in the impoverished Rio Grande Valley. On behalf of the state, Deputy Attorney Jimmy Blacklock argued driving distance for these women does not pose a “substantial obstacle.”

Pointing to the closed El Paso clinic, the state's attorneys argued that women seeking abortion would have “no trouble at all,” as they can obtain the procedure in neighboring New Mexico, 10-15 miles away, instead of traveling to San Antonio. It’s not that clinics can’t comply with the ASC rule, said Blacklock, it’s that they’ve chosen not to and hope the court will block it for them.

Attorneys for the state noticeably questioned not only the validity of expert testimony, but the professional and academic credentials of witnesses for the plaintiffs. “You are not a scientist? You are not an academic?,” the state’s lawyer pseudo-rhetorically asked South Texas “promotora de salude”, or community health educator, Lucy Felix. (Felix shot back, via a Spanish translator, with some punch of her own: “No, and I’m not an attorney, either.”)

Outside the federal courthouse, both reproductive rights and anti-choice activists gathered to protest.

“We’re here to show our support for providers and be a visible presence to demonstrate that Texans are fighting back, that we care about what happens to people when they can’t access abortion and to show that we won’t back down,” said NARAL Pro-Choice director Heather Busby.

Abortion clinics first filed a legal challenge to stop the hospital admitting privileges and pharmaceutical abortion restrictions last September. Yeakel ruled the first section unconstitutional, but the state appealed, sending the case to a three-judge panel on the 5th Circuit, which agreed with the state. Providers have asked the full court to rehear the case and now await a response.

The new trial is expected to continue throughout the week, ending on either Thursday or Friday. Whatever Yeakel rules, either side is expected to appeal.