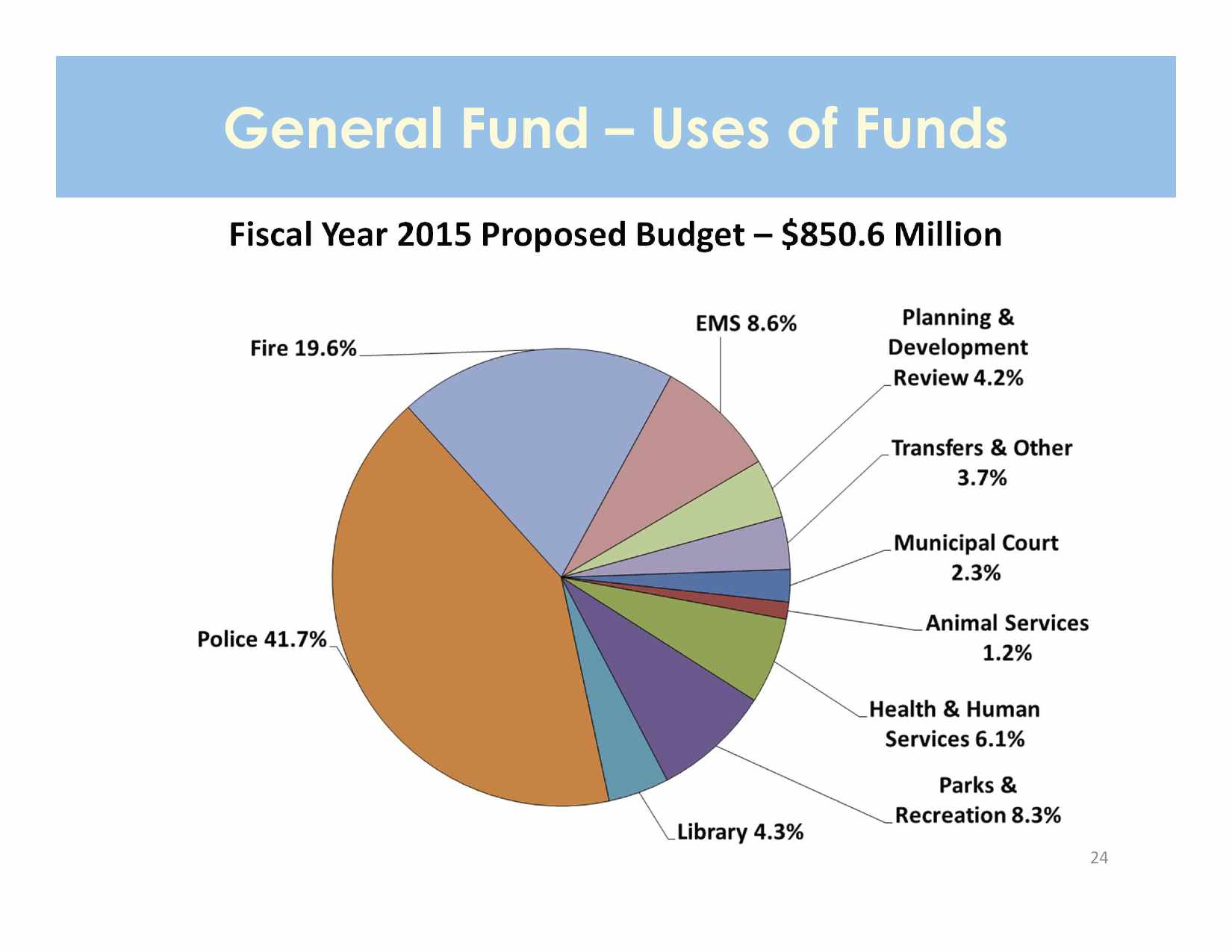 More precisely, in Ott’s submittal letter to Council, he wrote:

• 'Is balanced, structurally sound, and sustainable—as witnessed by General Fund reserves increasing from their current rate of 12% to 13.5%;

• 'Values our employees through well-deserved wage increases and by holding the line on health premium costs;

• 'Proposes smart, value-added investments in the City’s technology, equipment and infrastructure; and,

• 'Carefully balances the service demands of a growing community with ongoing concerns over affordability by proposing more than a two-penny decrease in the tax rate.” (emphasis in original)

The budget officers spelled out those general principles in numerical detail.

These are the headline numbers – proposed, not final – subject to Council review and adjustment, public hearing, and eventual approval (in early September). Since local property values continue to soar, that 2.2 cent's tax rate cut will still raise more revenue from local property owners. But it's worth noting that in the spring, the budget staff was projecting only a 0.7-cent reduction in the property tax rate, tax/fee increases totaling $13.38/month on the median value house (projected then at $193,000), and that Austin Water was going to take the largest monthly bite ($4.84/month). Assisted by an appointed task force, AW found nearly $30 million in savings, and is proposing an increase of only $2.62/month. Austin Energy, at an increase of $4.67/month (blamed largely on ERCOT-set fuel costs), is asking for the highest bump – and Mayor Lee Leffingwell and several Council members suggested Thursday they want to take a hard look at that number (especially since AE would also move $44 million into reserves).

CM Bill Spelman once again told Austin Police Chief Art Acevedo he is looking forward to the justifications for those 59 new police officers (Acevedo responded that the department really needs 102, but whittled down the request.)

That’s not all that’s up for discussion, at least in principle. Council was expecting a briefing on staff’s “homestead exemption” research, but time ran out Thursday. Leffingwell suggesting delaying the briefing until after the budget is completed “because it can’t be implemented in this budget cycle in any case.” But sponsoring CMs Mike Martinez and Kathie Tovo asked that it happen at Tuesday’s work session – in part, suggested Martinez, to show citizens just how difficult it is to find $36 million (the estimated cost of a 20% exemption) in the GF budget. So look for that briefing Tuesday (9 a.m, Boards and Commissions Room, City Hall).

Oh, and the work session wasn't entirely devoted to the bottom line – at Ott's urging, the assembled officials serenaded a hesitant but jovial "Happy Birthday" to Acevedo (50) and Martinez (45).

For more on the ongoing budget deliberations, follow the Newsdesk and the Chronicle print edition.