One incumbent, one regular face confirmed, but still many vacancies 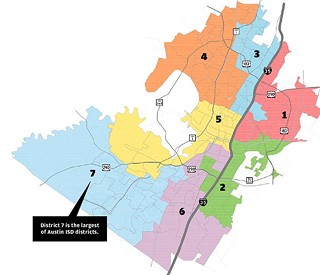 Seems like everyone is busy on Monday evenings: After 10 days, a grand total of two candidates have filed paperwork to become an Austin ISD trustee in the Nov. 4 election. That means, so far, there are three seats with no declared candidate.

As noted in the current issue of the Chronicle, District 7 Trustee Robert Schneider had already announced his intention to run for a fourth term (see AISD Race: A Voice for Southwest Austin, July 25.) With filing having opened on July 18, he is now the only incumbent to have actually filed his paperwork.

However, he is not the only candidate. AISD confirmed today that former Austin Council of PTAs director Monica Sanchez has filed paperwork to run in District 6. She aims to replace incumbent Lori Moya, who announced earlier this month that she will not run again.

Neither looks likely to be running unopposed. Yasmin Wagner, a creative director at computing firm AMD and member of the district's Boundary Advisory Committee, has not formally declared her candidacy to run against Schneider, but has appointed a campaign treasurer. Meanwhile, Paul Saldaña had already announced his intention to run against Moya, and is expected to follow through against all comers.

So what's happened to the rest? Of the remaining three seats up for re-election, Board President Vince Torres has already confirmed he will not seek a third term representing Northwest Austin in District 4. Across in District 1, representing the city's Northeast, Trustee Cheryl Bradley has made it clear, to her fellow trustees if not to her community, that she will not run again.

The wild card is officially At-Large Place 9 Trustee Tamala Barksdale. She has been taciturn about her electoral future since some noncommittal statements in April. Now that filing has opened, there's a logjam forming: There are candidates lined up, but they are less willing to challenge Barksdale than to run for an open seat. If she gets in the race, that could mean some of those candidates either moving to other races, or dropping out completely.

That's causing some headaches for education advocates, who would like to know if anyone is actually running. So far, as is the norm with AISD, there is a dearth of real contenders. If groups are having to waste energy on finding candidates, that means less time to campaign, and fewer informed options for voters come November 4.