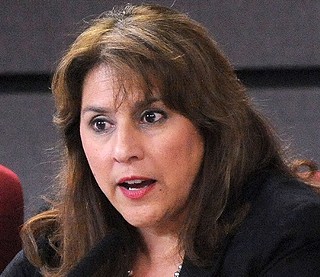 Another bombshell in the Austin ISD board of trustees: District 6 Trustee Lori Moya has announced that she will not seek re-election.

Moya had been coy about any public statement whether she would or would not run again, saying simply that she would wait until after graduation season was over. However, mere days after President Vince Torres announced that he will not seek re-election, now Moya has decided she will not try for a third term.

She has represented District 6 since winning the seat in 2006. However, in the past couple of years she has become extremely unpopular with many residents of AISD for her support for former Superintendent Meria Carstarphen and her education reform agenda of single sex and charter schools. She was already the first incumbent to attract a challenger, with local consultant Paul Saldana saying he is contemplating a run.

This now means three of the five incumbents up for re-election this November – Moya, Torres, and Cheryl Bradley in District 1 – are now leaving empty seats. Only District 7's Robert Schneider has confirmed that he will run again, while At-Large Place 9 trustee Tamala Barksdale has still to make a public decision on her plans.