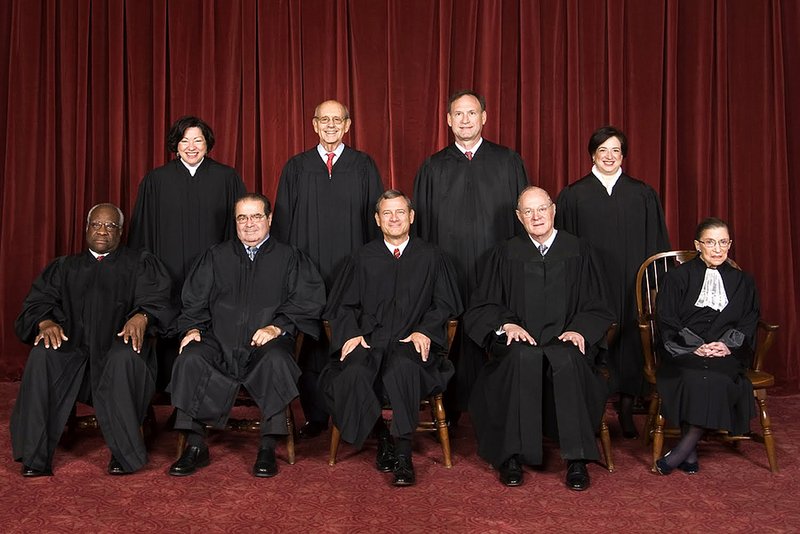 The US Supreme Court rules 5-4 (yet again) against women's and workers' rights, all in the name of free market freedoms

The Republican Party always had it figured out: The true power of the presidency is in US Supreme Court appointments. Never was that clearer than two rulings made this morning, one hammering access to birth control, the other undercutting unions.

The ever-so-predictable conservative block of Chief Justice John Roberts and Associate Justices Antonin Scalia, Anthony Kennedy, Clarence Thomas and Samuel Alito, as usual, brought their majority but not unanimous decisions down this morning, striking more profound blows than either the presidency or Congress has hit in years. And, most significantly, none of them will be accountable at the ballot box.

In Burwell v Hobby Lobby, the gang of five upheld the complaint by the owners of the craft store chain and those of Conestoga Wood Specialties that being forced to provide contraception to their employees violated their First Amendment rights. Put simply, they argued that, since churches and other religious groups are exempt from providing insurance that covers contraception, then so should they, just because they go to church. The court concurred that the owners "have sincere Christian beliefs that life begins at conception and that it would violate their religion to facilitate access to contraceptive drugs or devices that operate after that point."

In the majority opinion, Alito wrote that the Department of Health and Human Services has created a system where affected employees can basically buy their own add-on to their policy, if the religious-based non-profit they work for won't cover the cost. "HHS has provided no reason why the same system cannot be made available when the owners of for-profit corporations have similar religious objections."

In a headscratching moment of legal selectivity, Alito added that "this decision concerns only the contraceptive mandate and should not be understood to hold that all insurance-coverage mandates, e.g., for vaccinations or blood transfusions, must necessarily fall if they conflict with an employer’s religious beliefs. Nor does it provide a shield for employers who might cloak illegal discrimination as a religious practice." In shorter terms: Evangelicals can prevent women from receiving the pill (although many are prescribed for non-contraceptive reasons) but Jehovah's Witnesses still have to pay for coverage that includes blood transfusions.

Unsurprisingly, Associate Justices Ruth Bader Ginsburg, Elena Kagan, Sonia Sotomayor, and Stephen Breyer all dissented. Noting that women paid more for coverage before the Affordable Care Act, Ginsburg argued this ruling rolled everyone back to that. Moreover, she argued that having contraception folded into the company's premiums was not, as the majority ruled, a major or unconstitutional imposition. However, it does create an unfair burden on the women who want or need that coverage. She wrote. "Accommodations to religious beliefs or observances, the court has clarified, must not significantly impinge on the interests of third parties."

It was slightly brighter news for unions in Harris V. Quinn. SCOTUS ruled 5-4 that home health care workers in Illinois cannot be compelled to pay public sector union dues. This may sound like a minor issue, but there was real fear that the increasingly and clearly anti-worker SCOTUS could have used this ruling to completely demolish how public sector unions are financed. In states with collective bargaining for public sector workers, there is no obligation to join a union. However, in some instances the government entity will take a small garnish from non-members salaries to be paid to the union, since they still receive the benefits of their negotiations. In this instance it was the National Right to Work Legal Defense Foundation (another head of the Koch Bros. hydra) facing a coalition of labor unions, including Service Employees International Union and the American Federation of Teachers, which had been working to organize these most vulnerable of government workers.

In her dissenting opinion, Kagan wrote, "The Court did not, as the petitioners wanted, deprive every state and local government, in the management of their employees and programs, of the tool that many have thought necessary and appropriate to make collective bargaining work.

However, the court did rule that fair share legislation could not be applied to Illinois' in-home care program, since their new narrow definition said that these care workers are not "full-fledged public employees." The unions had argued that, since their salaries are paid by Medicaid, that makes them de facto government workers. SCOTUS rejected that idea, and in doing so found yet another way to benefit corporations.