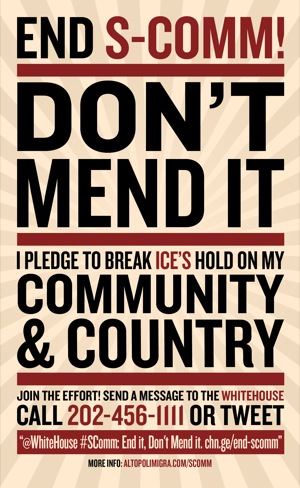 Launched in Travis County a year after its 2008 inception, S-Comm is an information-sharing program with the U.S. Immigration and Customs Enforcement agency, ostensibly designed to identify undocumented immigrants with criminal backgrounds, and to target them for deportation. Under the program, the county sheriff’s office, headed by Sheriff Greg Hamilton, honors “ICE detainers” for 48 hours to allow immigration officials time to arrive at the jail to begin deportation proceedings. The program goes beyond traditional sharing of fingerprints with the FBI (for criminal background checks), providing detainees’ fingerprints to ICE as well, to determine if those arrested are “undocumented” – i.e., not possessing official immigration documentation.

Local opposition has steadily mounted against the program for its indiscriminate use of such ICE detainers, which often trigger deportation of undocumented immigrants arrested only for misdemeanors. Immigrants’ rights advocates report that nearly 5,000 deportations have resulted from county-originated S-Comm arrests – leaving a trail of broken families.

Thursday morning, prior to the Council meeting, Council Members Laura Morrison, Mike Martinez, and Mayor Pro Tem Sheryl Cole held a press conference in the City Hall media room to announce their co-sponsorship of the resolution. They were flanked and supported by 30 representatives of various civil rights organizations.

“It [S-Comm] takes a toll on broken families, it erodes trust in law enforcement and policing efforts, it’s costing the taxpayers, and it’s not an effective mechanism for taking serious criminals off the streets,” said Morrison.

Martinez spoke of the value of fostering community trust, as well as the repercussions when that fragile trust is lost. He and others agreed that the aggressive law enforcement tactics in the county’s use of S-Comm has created a climate of fear in immigrant communities, with residents reluctant to report crimes for fear of being identified as undocumented and facing deportation. Instead of making the communities safer, the program makes it more difficult for police officers to do their jobs.

As enacted, the resolution is three-pronged: it formally opposes the use of Travis County resources and taxpayer dollars to implement S-Comm; it urges the sheriff’s office to end its voluntary compliance with ICE detainers by holding people in jail for ICE to assume custody; and it directs the city manager to research ways to minimize or replace the use of the county booking facility until S-Comm participation ends. (The draft resolution, adopted unamended, is available here).

During the 7pm discussion on a packed city council agenda, 11 Travis County residents – including a handful who had been personally affected by S-Comm – took their turns addressing Council in support of the resolution. No one spoke against.

And before that testimony took place, Council Member Bill Spelman hinted at the likely outcome. “I don’t think we’ll need much persuasion,” Spelman said. Some 30 minutes later, the motion passed unanimously, and those gathered burst into cheers and applause.

For more on the Secure Communities program and the aftermath of the Council action, follow Newsdesk and see next week’s print edition of the Chronicle.

At S-Comm Forum, Both Sides Dig In
Sheriff claims his hands are tied