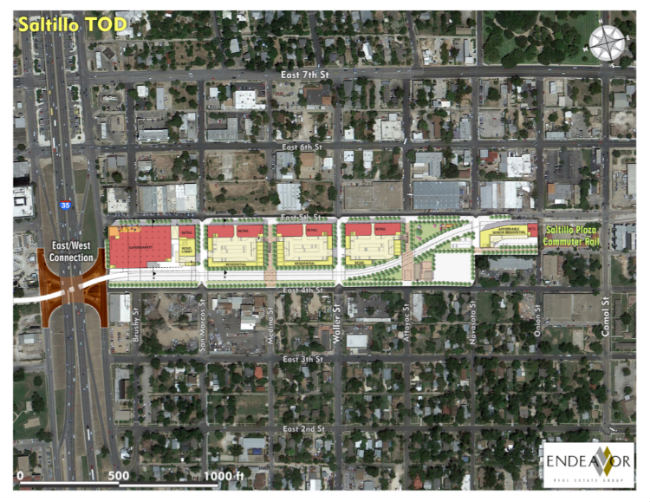 In a blow to neighborhood and grassroots activists, the Capital Metro board on Monday selected Endeavor Real Estate Group /Columbus Realty to develop the Plaza Saltillo property the transit agency owns in Central East Austin.

The decision wasn’t made lightly; it came after two 4-4 votes that deadlocked the choice between finalists Endeavor and Saltillo Collaborative. On a third vote, board member John Langmore broke the tie and swung to Endeavor, joining Norm Chafetz, Terry Mitchell, Beverly Silas, and Ann Stafford in the 5-3 vote. Board Chair Mike Martinez, Vice Chair Chris Riley, and David Siebold stuck with Saltillo Collaborative on all three votes.

The Saltillo Collaborative team is headed by Constructive Ventures’ Perry Lorenz and Larry Washaw, and includes affordable housing nonprofit developers Foundation Com­mun­ities and Guadalupe Neighborhood Devel­op­ment Corporation. Their proposal had the support of the East Cesar Chavez Neighborhood Planning Team, a stakeholder in the planning process, and the Workers Defense Project, which endorsed based on the the collaborative’s commitment to pay all construction workers a living wage, among other things.

Endeavor has also committed to pay living wages, but WDP, in a statement issued Tuesday night, said it had favored Saltillo Collaborative because the team had agreed to the group’s Better Builder program. In addition to living wages, the program calls for workers to receive contruction safety training and workers compensation coverage. The group said it would “continue to extend invitations” to Endeavor to commit to develop the 11-acre tract under the tenets of the WDP program.

Though the financial terms of each proposal have not been disclosed, the Endeavor proposal “provides a higher financial return to Capital Metro by generating more revenue than the competing proposal, maximizing long-term revenue and optimizing value of assets,” the agency said in announcing the board’s decision. (For more on the two competing proposals, see “New Life For Plaza Saltillo.”)

Cap Metro and Endeavor, better known locally for its high-end Domain shopping center in North Austin, will begin negotiating a formal agreement to develop the land that spans eight blocks just east of I-35 between East Fourth and East Fifth Streets. The project will be anchored on one end by the existing Plaza Saltillo commuter rail station, which will remain unchanged, and the other end by a full service grocery store along I-35. The Endeavor plan includes 25 percent affordable housing, half of which would be reserved for seniors.

Saltillo Collaborative team leader Lornez expressed disappointment over a decision that ran counter to what neighborhood stakeholders had wanted for the site. “When someone – or some board says – ‘it is not all about the money,’ it really means ‘its all about the money,’” he said.