Return of the Unruly Mob 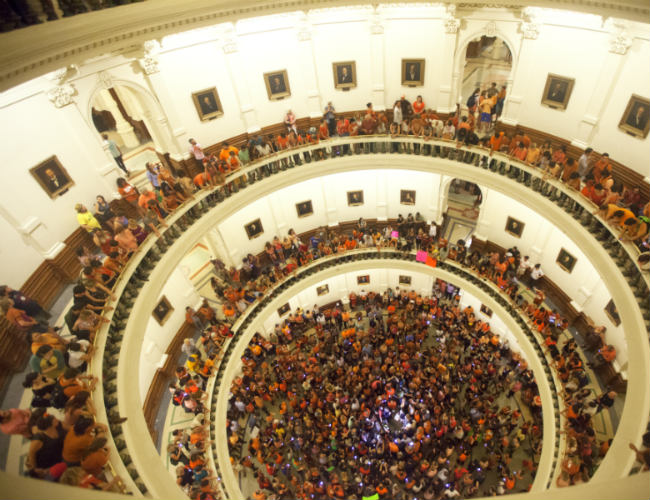 The Texas Capitol Rotunda on the night of the filibuster. (Photo by Jana Birchum)

The sea of orange shirts, those now iconic pink shoes: The images from Wendy Davis’ filibuster are now etched into history. But they could never quite capture what it was like to be there. For a few hours on June 25, there was no more exhilarating place to be in Texas. No photo could capture the thunder of the crowd’s roar.

In many ways, the whole story was in that din. One could hear the weeks of frustration finally being released. There was outrage and confusion, and then a sharp burst of jubilation. One had the sense that the echos were being permanently formed. If it seems strange to laud the filibuster after a year of setbacks, find a video and turn up the volume. What you’ll hear isn’t just shouting. It’s detonation.

The conservative state Legislature may have passed some of the most strict abortion restrictions in the nation, but they also birthed a new generation of activists. This week, abortion rights advocates are reminding the world that the orange army is as loud as ever.

For those who can make it to Austin, Sen. Davis, Sen. Leticia Van de Putte, and Planned Parenthood Votes’ Cecile Richards will be at the Palmer Center for an anniversary celebration Wednesday. For those who are able to afford it, preferred seating options are available at $1,000, $500, and $20 levels. However, the event can be attended for free by calling 512/472-8382 or stopping by the Travis County Democratic Party office at 1910 E. MLK between 12 and 7pm through tomorrow. Nearly 200 watch parties have also been planned throughout the state.

And while waiting for the party to start, Fight Back Texas is making a renewed call for pro-choice activism. The website includes an must-read oral history of the filibuster from Democratic lawmakers, journalists, and activists – and a video of the final uproarious moments. The unruly mob is invited to make their voices heard through an online pledge to keep fighting anti-abortion legislation.

UPDATE: The Palmer Center isn't the only celebration in town. After the official Davis campaign event, the unruly mob can revel at the Butterfly Bar at 2307 Manor. State Reps. Jessica Farrar and Donna Howard, representatives from Whole Woman's Health, Lenzi Sheible from Fund Texas Women, and Rocío Villalobos from YWCA Greater Austin and Rise Up Texas are scheduled to appear.