A Tollway’s Toll on Trees

A fight to save the Gateway Twin Oaks 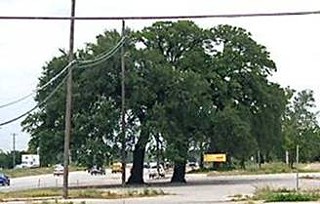 The Gateway Twin Oaks – two enormous oak trees that stand 10 feet apart along U.S. 183 near Vargas Road – are like a beloved elderly couple in the southeast neighborhood of Montopolis. If they could talk, neighbors say, they would tell you they’ve been around since the battle of the Alamo.

But the heritage trees appear to be on the chopping block because they stand in the way of the proposed Bergstrom Expressway, which would turn the 183 South corridor from U.S. 290 to State Highway 71 into a toll road. According to residents, tree advocates, and the Austin Heritage Tree Foundation, regional transportation officials announced May 28 they had reversed course on their original promise to spare the two trees in their road design.

Now there’s a grassroots effort to save the pair of oaks as residents and tree huggers try to fend off the forces of the Central Texas Regional Mobility Authority and the Texas Department of Transportation.

In a recent email blast, Peggy Maceo, a Gateway Oaks advocate and volunteer member of the city Urban Forestry Board, said she has worked with transportation officials since 2008 to save the heritage trees from the 183 toll road.

“When Austinites [first] learned that the oaks were to be removed, there was such public outcry from citizens, city leaders, legislators, and county commissioners, that TXDOT listened and recognized the importance and value of these trees to the community and made a firm commitment in writing to save all of the Gateway Oaks,” Maceo wrote. “For years TXDOT never faltered from the commitment to spare the oaks.”

Even as recently as October 2013, at an open house on the expressway, CTRMA boasted that the plans “reflect community values and preserve natural surroundings,” according to Maceo’s email.

But at a meeting in late May, advocates heard a different story – that the trees, because of their age and some defects found in an arborist’s assessment, posed a risk of toppling over, possibly onto cars.

“CTRMA said they would at least consider the possibility of relocating the trees if they could get approval from ‘higher-ups’,” Maceo wrote. “This about face in attitude and commitment is a real travesty not only for Austin's historic Gateway Oaks but also for the community input process that TXDOT/CTRMA presented as credible.” 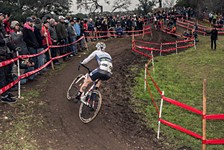 Bikes in the Mud
Parks & Rec in the barrel