With a great deal of happy fanfare, speeches, celebration, exhibitions of diving and synchronized swimming, the rebuilt, redesigned, and rejuvenated city of Austin Bartholomew Park Pool opened Saturday morning, welcomed by the Windsor Park neighborhood and a brace of park officials, four City Council members, and a handful of Council candidates. 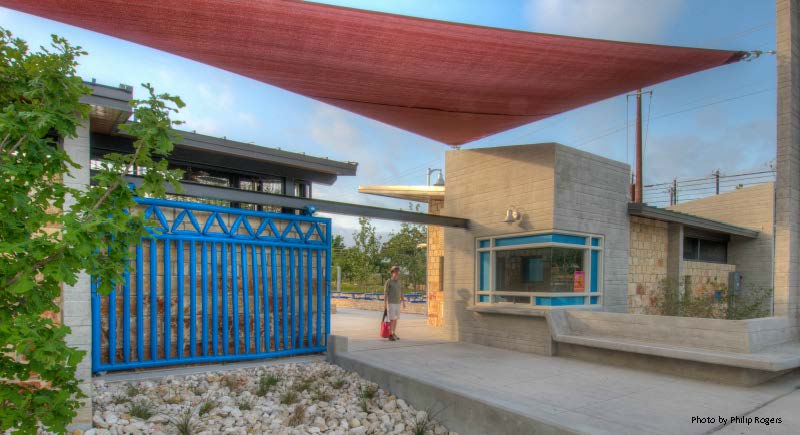 Council Member Mike Martinez welcomed a sizable crowd to the pool (actually open to the public for a week, but free today) and “the great District 1!” (but see below), in the first of several brief speeches touching on the history of the pool and its recent reconstruction. Martinez credited the staff and the community, and the 2006 bond vote, for enabling what is now a miniature water park, with lap pool, a diving area, a kids’ slide and pool, and other amenities. “We won’t need to go to New Braunfels any more,” joked Martinez. “We’ve got our own Schlitterbahn right here.”

Briefly, the large public pool, built in the Sixties and one of the city’s busiest district pools, was closed in 2009 due to structural failure – a massive crack had opened in the pool’s concrete bottom. When construction of a traditional pool began, groundwater began rising – necessitating delay but also allowing the neighborhood time to better influence the new design. Parks and Rec Director Sara Hensley told the crowd that the neighborhood’s concerns persuaded parks staff – encouraged by Council Member Laura Morrison – to “step back and do a rework,” and she thanked “staff, Council, policymakers, and the community” for creating a wonderful facility and finding the funding to underwrite the extensive reconstruction.

The Parks & Rec Department summary: “The new pool facility consists of a lap pool with an adjoining diving well, a recreational pool with a tethered water walk with floats, and an activity pool for toddlers that includes a beach entry and a small slide. Also included are two water slides, lawn areas and a picnic area. In addition to the new pools, the facility includes gender-specific bathhouses and two family changing rooms. The overall construction cost of the facility was $5.7 million and was paid by 2006 bond funding.”

The other ceremonial speakers included: Morrison, Mayor Pro Tem Sheryl Cole, and CM Kathie Tovo, artist Casey Cooper (who designed the pool’s new faux-floater main gate), and Windsor Park Neighborhood Association President Martin Luecke. All celebrated the community effort and resources that went into the project, and Morrison declared, “This design rocks!” (Earlier, Morrison confided wryly that her own youthful frustration at failing to make her high school synchronized swimming team was partly behind her suggestion to create one for the occasion – and then to her dismay, she discovered she couldn’t spare the practice time to participate herself.)

Luecke declared the new pool “Schlitterbahn North!” and noted that Bartholomew was the first integrated pool in Austin, and marked how times have changed since the earlier days. In this month’s neighborhood newsletter, Luecke wrote: “This is the culmination of many years waiting and working and waiting some more, and getting a little lucky. It is the way of the universe to give what is needed, and although this is just a swimming pool complex, it feels good to finally call something this good ‘ours.’”

A gallery of photos of the Bartholomew Park Pool, by Lizzie Jespersen, is available here.

One final note: The several Council candidates in attendance included District 1’s Andrew Bucknall and Ora Houston, District 4’s Greg Casar, Monica Guzmán, and Laura Pressley (and we may have missed a few others among the swimsuits). [Not to be outdone, District 4 candidate Katrina Daniel later provided Newsdesk photographic evidence of her attendance; and a day later, Sharon Mays did the same. Can't keep up with the candidates without a scorecard.] The official speakers’ consensus appeared to be that the pool and the whole of Bartholomew District Park is in District 1 – but thanks to a tip from Guzmán, Newsdesk checked the address (5201 Berkman Drive) on the city’s 10-1 District lookup map, and there – it says District 4.

They better shake that out before November.