Travis County Commissioners are scheduled to vote Tuesday on whether to challenge this year’s commercial property tax roll. The item is set for 10:15am.

Commissioner Margaret Gomez says she won’t be at Tuesday’s meeting but if she were she’d be casting a no vote.

In a Facebook post on Sunday, her birthday, Gomez said she opposes filing a challenge petition with the Travis Central Appraisal District.

Last week, the commissioners met in closed session with attorneys to discuss the possibility of challenging the appraisal roll in response to protests from homeowners over their tax bills this year. A May 20 community forum on property taxes drew an overflow crowd of people concerned about getting priced out of their homes.

Homeowners are increasingly being asked to pay more in property taxes under a state law that tilts in favor of large commercial property owners. Under this system, Texas has lost an estimated $4 billion over the past five years, according to Real Values for Texas, a statewide grassroots campaign calling for Legislative reforms to state property tax laws.

In her Facebook post Sunday, Gomez said the commissioners have several alternative options other than filing a formal protest with the appraisal district. She said the county could work collaboratively with the appraisal district, the state Comptroller’s Office, and the Legislature to make permanent changes to the tax code. (Commissioners made similar commitments in 2009 as an alternative to challenging the commercial property tax roll, yet little progress appeared to be made.)

“The other remedy is for the City of Austin to grant a homestead exemption to its homeowners. It is no longer a nice thing to do but a necessary thing to do to help Austin families, especially long-time residents, survive in Austin. That vote can be made any Thursday that they post it on their agenda. I'm pulling for them to do this. Talk about a fantastic birthday present this year! I shall return!”

Council Member Kathie Tovo has several property tax-related proposals on Thursday’s Council agenda, but homestead exemption isn’t on the list. Tovo proposes that the city file a challenge petition with the Appraisal Review Board, designate property tax reform as a priority on the city’s 2015 legislative agenda, and develop a policy relating to property tax protests by companies that receive economic incentives from the city. 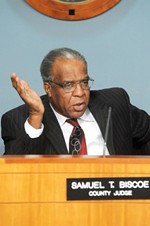